Truthiness is writing up his own Wave 7 article, but I want to do my own.  Plus he is coming at it from a different angle than I am.

Let's look at the fun! 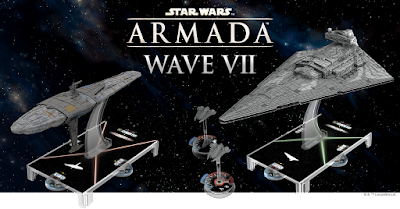 There is a new ISD reskin, with 2 new variants that we can potentially play.  The MC75 makes it's appearance as well, and looks fun as hell from what little of a spoiler we get.  Plus we get the best character from Rogue One that isn't a droid as our new commander, Drunkle (Drunk Uncle) Raddus. He just wants to fight, and his best ideas involve hitting ships with other ships.

Oh, yeah, we got some other commander for the Imperials you may have heard of. 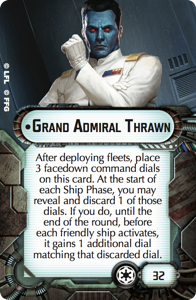 Less flexibility than Leia or Tarkin, but at a price point someone might actually pay.  Have a game plan and execute it to perfection.  Give yourself protection from Cham Syndulla / Slicer Tools.  Thrawn has just a TON of fun things that you can do with him.  More so than just banking a bunch of Squadron commands on him so that you can focus on other things with your command stack.

A few notes:  It doesn't say that you need to make a command stack with those 3 tokens.  Thrawn does have flexibility in that you can flip those tokens in any order.  That's cool.  Thought you'd need to navigate before that squadron command, but you need to get it off now and navigate later?  No problem, Thrawn planned for that contingency even if you didn't.

However, the rules don't let you double up on command dials.  Don't think you're getting 10 squadron commands from your Quasar with Expanded Hangers.  When you perform a command, you can spend one token, one dial, or one token and one dial.  What you can do though, is spend one dial on reveal for a token, then do dial + token, if you want to do a supped up command.  So, 6 squadrons off your Quasar is still within the realm of possibility.

At risk of getting into too much detail on Thrawn, while we still have an article to write on him once he is released, he can help EVERY phase of the game, the question to ask yourself is "Where would the extra commands be of most use" and "what would those commands be?"  Double up squadron and navigates during the Skirmish, Concentrate Fire or Engineering from every ship during the Engagement, he is still a commander that you probably want to use earlier in the game, say from Turn 2 - Turn 4. 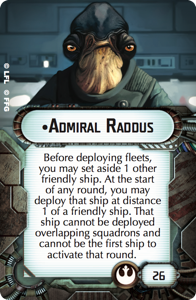 Hyperspace Assault for Player 1!  Drunkle Raddus wants to drop something big, fat, and full of anger somewhere your opponents were not expecting it.  You should already be thinking of Corvettes or Quantum Storm as a way of getting the coordinates you need to bring something big and nasty into to play.  Again, a few notes on Raddus:

It's 1 other friendly ship.  Not a small-medium.  Jump in whatever you want.  The Mon Karren, Admonition, a double arc'd MC75 (wow, those arcs!).  Feel free to go light on deployments because you definitely have something that will out flank the enemy!

Whatever ship is hidden away is out of play, so can't be the ship Raddus is on.  Plan accordingly.  Also, don't lose Raddus before you can bring that ship back in.  Raddus dies and that ship is lost too. 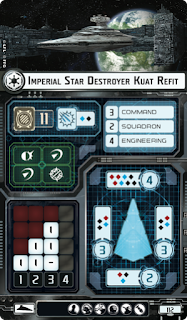 An ISD I-Class with Tua baked in.  Also Ordnance instead of Turbolasers.  Also, also a Blue out the sides so you can Leading Shots!  Oh, it's an ISD.  Same icon in the lower left as the old ISDs, so it SHOULD be able to accept the same titles as before.

Guess what your new home for the Avenger title with Boarding Teams is?

The ISD I retains its position as the Large Ship squadron platform, while this takes over the ISD I as the close quarters brawler.  3 Black Dice front and 2 Side with reroll abilities says that you can reliably take a critical upgrade like Assault Proton Torpedoes or Assault Concussion Missiles.  Boarding Troopers and that blurry Darth Vader boarding team are more than happy to tag along.  So what that you only flip 2 defense tokens with Boarding Troopers?  That's the most brace tokens that any ship can reasonably have. 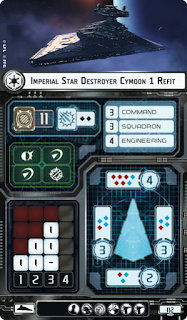 Okay, this is pretty unique.  Double Turbos, 5 Red Dice from the front, and a Fleet Command Upgrade slot at the cost of your Defensive Retrofit.  But what fleet commands do the Imperials want?

Looks like there's an Intensify (Forward Firepower?) card in there, that's probably a new fleet command for shootin'.  I could see that being an Imperial favorite.  Shields to Maximum! would also be pretty fun for an already hard to kill Imperial fleet (Motti / Double Interdictors?).  Now, Entrapment Formation looks even more fun.  Add a navigate command, and you get the benefit of Admiral Ozzel (in my opinion a very underappreciated Imperial commander) without having to take him.  I can't think of too many Imperial fighters that really need All Fighters Follow Me! so maybe we should leave that one behind.

Dual Turbos are very interesting though.  XI7s and XX-5s are an already potent combination, as are XI7s and Spinal Armament.  H9s and Quad Turbolaser Battery are likewise potent.  Should be fun to play around with the long range potential of this ship.  Maybe with Vader for rerolls, Spinals, XI7s, and Needa, and you have a long range powerhouse tossing 7 Red dice with Concentrate Fire.

Ackbar eat your heart out. 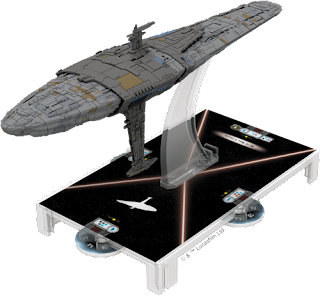 Profundity looks interesting, but that it only works with Corvettes or Flotilla don't really... excite.  I mean, dump a Hammerhead with some sort of boarding team or External Racks / Flechettes, or a Engine Tech SW90B in just the right place to maximize damage.  Can't be used with MC30s, Nebulons, or Peltas though.

Oh, and there were some squadrons hidden in the Chimaera spread.  Looks like 7 hull with Rogue / some sort of misprinted Escort for the named pilot.  7 hull and... something for the other.  Probably also Rogue (or Escort, wouldn't that be nice!)
Incoming Transmission From: Biggs at 08:00
Email ThisBlogThis!Share to TwitterShare to FacebookShare to Pinterest
Labels: Drunkle Raddus, Grand Admiral Thrawn, Star Wars Armada, Wave 7