I'm back for day two of the NOVA Open! For those unfamiliar with how NOVA does things, the cut is a little different. The top two from each day are guaranteed a spot, but the next four are pulled from a combination of the two days. This year, it just so happened to be exactly four from each day. From there, it's three rounds of swiss instead of single elimination. You're not out of it even if you lose the first round, and magnatude of win matters. So with that in mind, here are the day's first round pairings! 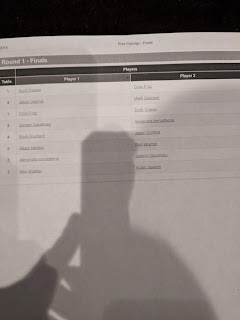 Scott was running Sloane with a mess of Phantoms, bombers, Maaerek and Rhymer. His dice were a bit all over the place, which is kind of party for Phantoms in my experience. I dropped in at the front of his congoline, killing Centicore and crippling the Quasar over two turns. I managed to slice the Quasar for a critical turn, letting me kill it while only allowing one meaningful squadron activation. Final was an 8-3 with a 211 MoV. Pictures from the round: 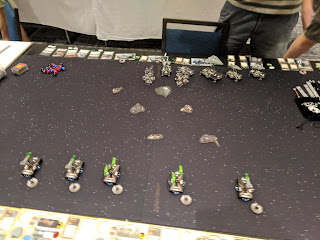 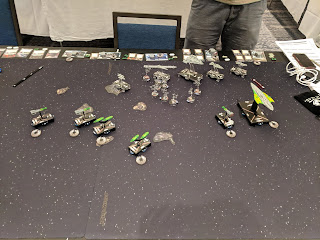 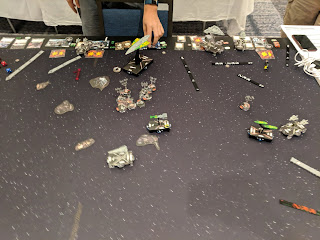 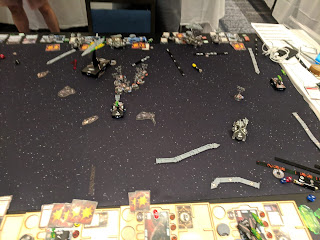 Jeremy over Alex with a 6-5 by an MoV of 9. His interdictor limped away with two health. Adam over Ron with a 7-4 (didn't see the MoV). In what looked like many a squad on squad fight with conservative capital ship action. Waiting on Jason and Mark. Mark's Yavaris is down in exchange for a bunch of Jason's A-Wings. Jason tabled Mark for an 8-3. We're taking a break for an early lunch. When we come back, it will be me against Jason, Adam against Jeremy, Ron against Alex, and Mark against Scott.

Forgot pictures for round two, but I beat Jason with an 8-3. This was the first time I've been outbid, so we played my Station Assault. I rammed his Admonition to death with the CR90s and used the Liberty and the TRC90s to trap and then kill his MC75. All the CR90s died in the process. The rest of the game was then a race for the Lib to chance down his Hammerhead for the table. I got it on the last turn and his A-Wings just barely missed killing the second station. Adam and Jeremy are still playing in what looks to be a likely 6-5. Alex tabled Ron for a 9-2. I didn't get a look at Mark and Scott before heading upstairs. Looks like it will be me against Alex at the top table in all likelihood. Adam played very conservative against Jeremy, drawing it out with minimal captial ship engagement. It ended as a 6-5 win to Adam with an MoV of just 12. Mark has killed Scott's raider and a mess of squadrons in exchange for a few of his own squadrons. Looks to be tipping decisively in Mark's favor.

The two pictures I remembered to take in round two: 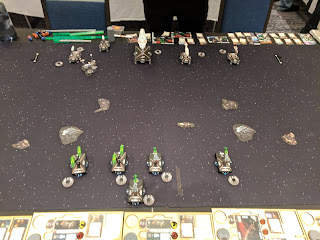 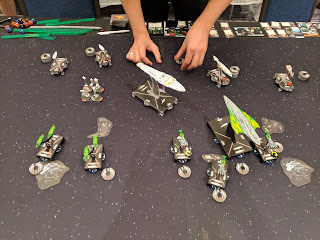 Going into the final round, I'm sitting at 16, Alex at 14, Adam at 13, Jeremy and Jason at 11. Mark handedly beat Scott. Final Round pairs were myself and Alex, Mark and Adam, Jeremy and Jason, and Scott and Ron.

Round three for me was a rematch of my day one failure against Alex. Having thought about my game, I realized that the Arqs could and should be quickly removed. If she placed them on the same side of the ISD again, which has typically been her deployment, I could drop in and only take one shot from the Arqd against the Lib before killing them both. That's exactly what happened. After killing the Arqs, the Lib pulled into the side of the ISD and the combined power of TRCs and the Lib brought the big guy down by the top of turn 5. I couldn't quite chase down her Raider, but I still ended with a 9-2.

Pictures from my round three: 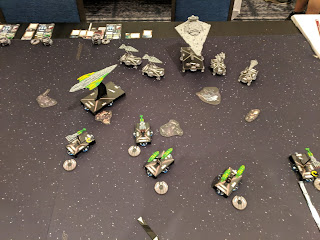 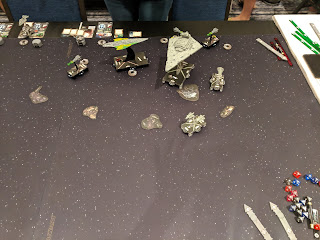 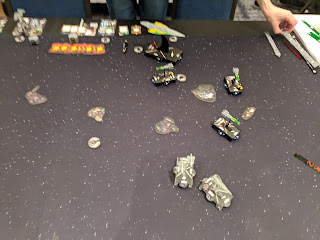 Pictures from around the room: 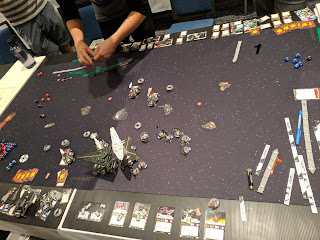 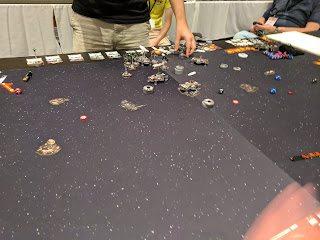 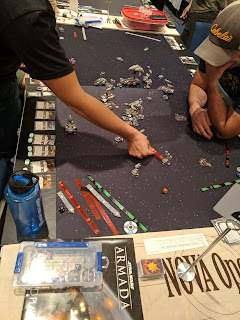 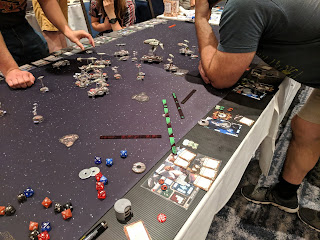 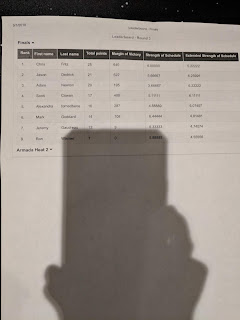 Incoming Transmission From: Truthiness at 10:25
Email ThisBlogThis!Share to TwitterShare to FacebookShare to Pinterest