Leaked Product Names / Numbers - What Can They Mean? 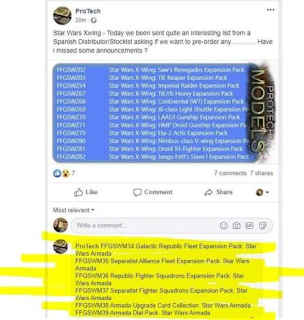 So, once again Europe comes to the rescue, leaking things they shouldn't leak about upcoming products, with a lot of FFG products for pre-order that we haven't even heard of yet.  Assuming these are true, what does it mean for Armada?


Well, the big takeaway is that there is a distinct lack of a Clone Wars Starter Set, which begs a few questions when combined with the GR Fleet and the SA Fleet Expansion Packs.  Do we just not get a new starter set for the Clone Wars?  These all do say "Expansion Packs" and as such aren't really an entry point for new players.  There's still no way to get official damage decks or range rulers by themselves, though the dice and maneuver tools are separately purchasable.

That begs the question - how big will these packs be?  Will you get a full 400pt fleet's worth of ships ready to go?  Or will it be at a smaller size, either combined together with 2 to hit the standard cap or with the fighter pack?

These might be similar to how X-Wing 2nd Ed introduced the Galactic Republic and Separatist Alliance with a large "Squadron Pack" rather than another starter, rather than the Legion Clone Wars or X-Wing 1st Edition First Order / Resistance.  Unfortunately this does not mean a cheap entry point to new players, but at least a (relatively) cheaper entry point into those factions from the existing player base.

We can all speculate on what ships are likely to be included in each pack, I won't worry about that too much here, but given X-Wing 2.0's "Squadron Packs", and both X-Wing's and Armada's Starters, I feel like it is safe to guess 1 Medium / Large and 2 Small ships seems probable?  The title certainly sounds like multiple ships in the pack, and it should be different ones, I'd hope.

Squadrons are a big part of Armada, so it only makes sense that they'd give us new squadrons for the new factions.  Again, your guess is as good as mine what they will be, but we're given no insight in the names.  At least they are purchased separately and we can probably expect the Armada Standard 2 stands of each of 4 squadrons, with 1 named unique and 1 generic.

We already have something like this in the Legion Upgrade Card Pack, which was released at the same time as the Legion Starter set.  Odd that it isn't being released with an actual starter set, but if someone wants to get into a new faction, and just has the starter, this is probably a way to get some of the more important meta cards out without forcing someone to buy multiple copies of non-faction ships.  All together a good thing for the community especially with multiple factions in the game.  And it means they won't have to think ahead about printing specific upgrades and including them into future expansions where either they might not make thematic sense, or might not fit the upgrade slots on those ships at all.

This is cool and good. 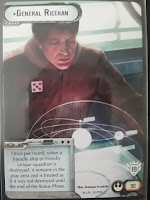 There's also a chance that this is a chance for them to release Errata'd versions of existing cards, which is a thing that FFG has done with their promotional material in the past, most recently with the Worlds 2019 Rieekan Alt Art.

Not necessarily something I can guarantee they do in a "neutral" pack, but it'd be pretty cool to have everything read what it is supposed to without having to consult the FAQ for more info.  Crossing my fingers for this one.

There's also a chance for NEW CARDS in this pack to give those people who don't want to invest in GR / SA factions to get access to the new cards as well.  I'd put the odds of that about 50/50.

Either way, I'm not particularly excited about this one, but I'm sure more than a few people are.  If that's you, enjoy.

Well, we're not able to buy individual ships, so if we want to make some crazy swing list like multiple copies of a specific ship we'll have to buy however many packets give us that ship, probably giving us other ships in the process.  At least it means we don't have to buy a Starter and at least 1 of each expansion to get every commander / unique officer / specific expansion upgrades (I'M LOOKING AT YOU, FLIGHT CONTROLLERS) just to get the cards we need to play.  So less good on ships, but probably better on upgrades.

No new mats in either X-Wing or Armada, so my dream of flying a Coruscant space battle from Episode 3 remains unobtainable from 1st Party sources at this time.

No new Rebel or Imperial expansions.

Can you see anything I'm missing?  Comment on it below!
Incoming Transmission From: Biggs at 16:30
Email ThisBlogThis!Share to TwitterShare to FacebookShare to Pinterest
Labels: Clone Wars, spoilers, Star Wars Armada, Wild Speculation