Corran Horn Doubletap - When To Use It, How To Maximize It. 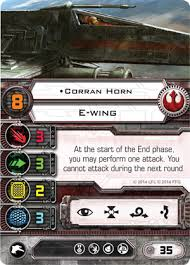 Corran Horn may be the biggest Marty Stu of the entire Star Wars universe.  He joins Rogue Squadron, winds up as one of the best pilots, rivaling Wedge and Tycho for the role.  Oops, and he's a secret grandson of a Jedi Master, and able to withstand torture and dark side temptation and blah, blah, blah.

Well, in X-Wing Miniatures, Corran Horn is no different in as much as he is all about doing things that no one else can even hope to try, and showing up the folks that have been doing his job (high offensive fighter) longer than he has (Wedge).  But how are you supposed to get the most out of him and his ability, and when should you activate it?  That is what we will be talking about today.

Let's talk about his ship first.  Corran is piloting an E-Wing which functions as more of a supped up defensive X-Wing/B-Wing/A-Wing hybrid.  It has the X-Wing and B-Wing's offense (3 attack), the A-Wing's Defense (3 defense), an X-Wing Hull/Shields (5 total), and interestingly enough both the X-Wing's Upgrade (Astromech) and the B-Wings (System Upgrade), as well as the B-Wing's barrel roll, and basically the X-Wing's dial.  Nothing new for the rebels with the E-Wing, just the best of the rebel's ships, for a hefty price-tag (27 for the naked generic low-pilot version) putting it squarely in 3 ship territory.

But the named pilots, Corran and Etahn, are what makes the E-Wing actually a viable ship.  Corran's ability allows you just straight up break one of the basic rules of X-Wing - and that is take another attack in a single turn and not even in the combat phase.  This is, to put it mildly, amazing.  As such, it comes with a drawback - if you shoot with him this way, you can't take another shot the next turn.  So when should you use the ability (which I will from here on out refer to as the doubletap), and when should you sit on it?

The best idea for this is to use the doubletap when it would be more advantageous to shoot this turn, than on Corran's next round.  This means also NOT using the doubletap when it gives you no advantage over saving it for a future shot.  I hesitate to give any hard and fast rules, but the basics should look something like this:

You get the point.  Don't shoot that second shot if it isn't in your best interest to do so.  There is one further consideration of course, which is if you can be in a better position two turns down the road, by having no shot this turn.  Then it is again a no-brainer - if you aren't going to get a shot anyways, might as well take it now no matter how much of a terrible shot it is.

Well, with that in mind, let's look at how we can best maximize Corran's role on your list.  Corran and his ship definitely fills the role of a closer - a good relatively high PS ship for end game mop-up.  R2-D2 is frequently seen on him in the hopes of getting him into the end game with relatively full shields and staying power, and works well with shield upgrade.  Veteran Instincts boosts him to a PS10, firing before phantoms and more or less before anything else.  Advanced Sensors boosts his maneuverability, letting him barrel roll before his maneuver, and works great paired with engine upgrade.

Now as to maximizing his special ability, pairing him with fire control systems gives him a free target lock for his second attack, assuming it is the same target as the first shot.  Predator gives him a light target lock on whatever he wants to shoot at, and marksmanship gives him a better focus attack on his target through both attacks as well.  R7-T1 is an interesting choice for an astromech, letting you boost into range 1 (or just out of arc) to doubletap more effectively, and with a free target lock to boot!  R3-A2 lets him double stress a target (and stress himself as well, admittedly) which is wonderful for phantom fights.

My favorite way to set him up is to run him very aggressively, with Biggs as one of his supports.  R2-D2 or R7-T1, Veteran Instinct (for phantom hunting) and Fire Control Systems.  Get him into range 1, and Biggs just barely in range 1 of him, and turn him loose.  You don't need to focus on defense until Biggs drops, and by then you hopefully have doubletapped your way into a fair exchange for poor Biggs.  With R2-D2, he also makes a good alternative target for Biggs, if you can split the fire between the two by getting Biggs just out of arc for some of the enemy ships.

Again, feel free to comment below on your favorite way of using Corran in your list, and argue why I am an idiot letting Biggs tank for a agility 3 ship.
Incoming Transmission From: Biggs at 02:14
Email ThisBlogThis!Share to TwitterShare to FacebookShare to Pinterest
Labels: Corran Horn, Doubletap, E-Wing, Rebels, Tactics, X-Wing