So, we've got Han Solo completely spoiled for us at this point.  It's fair to say we can do a pretty reasonable Ground Commander's Guide for him, assuming we got an accurate review.

Han is a an interesting commander - he isn't as supportive as Leia, and he isn't as offensively oriented as Luke.  Offensively, he boasts the Rebel Commander's standard surge to Critical, and boasts Sharpshooter 1 to help him squeeze shots through.  He also shoots 2 Red at a range of 1-2, with Pierce 2, giving him an average damage of 1.75 without rerolls, and an average critical hit roll of 0.5.  The Pierce means that when he does hit, he's pretty much guaranteed to do the damage.  Gunslinger further boosts this attack, letting him fire off 2 attacks at 2 different enemy units if he is in range of both.  Simply put, he's going to chew up enemy infantry / bikes if your opponent lets him get too close.

But not TOO close.  Han has the worst melee attack of any Rebel commander, only rolling 3 White dice.  And with Immune: Pierce on them he has no business tangling with Jedi except as a last ditch effort.

Speaking of which, his defense is deceptively good.  White defense die with a surge (33%) isn't anything to write home about, but his Uncanny Luck 3 is.  This gives him another 33% of the times his dice miss, making any given roll 54% odds (up to 3 dice).  Not bad, and closer to Luke odds.  He also has Low Profile, which means he can hide safely in light cover, or get automatic Heavy Cover with a suppression token while standing in the open!  (More on this in the upgrade section)  6 Health and 2 Courage round out his defensive stats, neither one being anything much to write home about.

His movement is 2, bog standard for infantry, and his upgrades include Command, Gear, and a new type he shares with the soon-to-be-released commandos, so I'm just going to call it "Elite" for now.

A good command range booster if Han is your only commander.  Something worth looking into at least.

Han is already pretty good defensively.  Turn him into someone nearly impossible to kill with this upgrade!  Just keeps some troopers nearby to soak up the hits.  The downside is you can't make your troopers Lucky as well.

This one is a pretty good gimmick, and feels like a Han Solo card.  It changes the math on what units to assign command tokens to.  After all, if you only have 1 token left of a specific unit in the pile, and you don't want to activate them but another type of unit, just by having this card you can guarantee you draw the right command.  Sort of good for the reverse, where you go fishing for a command to activate a specific unit.  Not quite as powerful as Battle Meditation punting a command anywhere on the map, but with this you can consider leaving your radios at home, and letting Han Solo instill a little unorthodox thinking into your command.

Hey, remember when I said that Han's Low Profile let him get heavy cover if he has a suppression token?  Well, Duck and Cover doesn't sound great, until you realize that you can jump him from being in the open to in heavy cover instantly.  And you do it right when you need to, so if the extra cover doesn't help him, just don't do it.

It's the only upgrade that fits in this slot until Boba Fett comes out, so it's that or saving 8 points.

Pointless for Han, unless you are getting him into melee.  Don't do that.  Don't take this upgrade.

What does Han need to climb.  Let him be boots on the ground.  Leave this behind.

Unhindered might be a big help, especially if you're planning on hiding in Light Cover / Difficult Terrain.

Gonna talk about this card for a few minutes.  This goes very well on your early activating commanders - you can use it to give them enough health to live through another round of commanding / commander specific command cards, and then let them die the next round.  Luke will love this card.

Also loving this card are heavy hitting / low defense troopers that are becoming priority targets.  Fleet Troopers love this card, for example.  It's not really a defensive upgrade, but a stealth offensive one.  For those of us who play Armada, Rieekan is pretty good, right?

It combines with Esteemed Leader (put it on the troopers protecting you) to let them keep fighting until their activation.  The triggers are an attack and suffering wounds, not being attacked.  It also works for Deflections (since you need to wait for your next activation), but not Force Choke.

Because it is an exhaust, it can be combined with turn order shenanigans and Veer's command card to hold up to 4 wounds.  Activate > Get shot > Round Ends > Veers Command Card recovers > Get Shot Again > Activate.  Maybe something to put on some Flametroopers, or Impact Grenade troopers while you run them into position.

This also combines well with a Han Solo Command card that we will get to in a little bit. 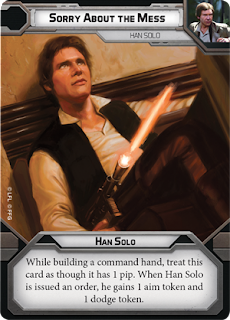 Han specific command card, and a 1 Pip, that gives Han a Dodge, an Aim, and pretty much guarantees first activation unless your opponent is running a mirror match.

Since we've already established that Han can shoot twice with Gunslinger, him going first can really cause a mess for your opponent's plans.  Still, I'm going to call this card situational, as it loses the flexibility of Ambush.  So think hard about how you want to include it in your list.

Luke definitely wants Son of Skywalker after all, and Leia's Coordinated Bombardment is a strong attack that also might not go off the way you want it to.  Ambush lets you activate the unit you definitely need to activate.  A shame you're not allowed to build a command deck with no Pip restrictions!

Remember when I said that Emergency Stims combo'd well with a Han Solo Command Card?  This is it. 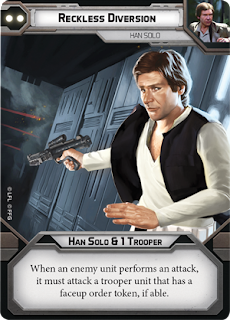 The rules on this are going to get complicated, so bear with me:

- An enemy unit is performing an attack.  They have Arsenal X or multiple weapons within the unit.
- Step 1:  Declare Defender - they must declare a trooper unit with a faceup order token, if able.
- Step 2:  Form Attack Pool - each mini must shoot a weapon at that defender if able.
- Step 3:  Declare Additional Defender - Are there any weapons left?  Go back to Step 1.  Can any of those weapons shoot a trooper unit with a faceup order token (including the same one)?  Got to declare that unit as a defender!

Basically, this card doesn't "shut off" when your opponent is performing an attack, so they not only have to shoot you if they want to do an attack, but they must shoot you with EVERYTHING they have that can shoot you.  Only once all minis / Arsenal weapons that can shoot you have been exhausted, can they shoot something else.  Comedy option - give a command to Luke and make your opponent say "I want every gun we have to fire on that man."  Probably not a good idea though.

It should be noted, that if you are at range for some of the weapons, but not all of the weapons, if they attack they must attack you with the weapons that can hit you.  This means that you can sit at Range 4 of HH-12 Stormtroopers or Range 3 of MPL-57 Fleet Troopers and make them blow their exhaust weapons to try and hit you.  Or you can be at longer than Range 1 from a Flametrooper / Flame AT-RT and they have to shoot you with their blasters instead of burning your buddies. 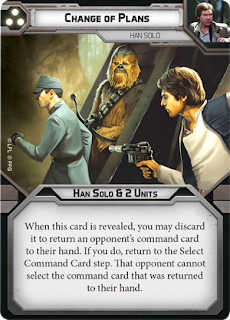 I'm beginning to think the reason Han is so expensive over Leia is that his command cards are really, really good.

So when you reveal this card (and your opponent has revealed theirs) you can discard it to punt their card back into their hand.  Not "any card they already played" - those cards have been discarded and are no longer in play.  Then you do the Select Command Card step again.  You won't have Change of Plans, but they won't be able to play their big card.  Use to keep your opponent for using an obvious Son of Skywalker or Master of Evil.

"What if we both use Change of Plans"?

Who has Priority?  It carries over from last round until the Select Command Card step is resolved.  Whoever has priority chooses whether to resolve theirs first, then if they didn't discard it to force a redo, the other player gets to choose.

Why on earth would you do that?  To try and spoof someone out of using Standing Orders, but you guessed wrong?  You fool!

Anyway, you'd do it the same way you resolve all disputes - the player with the turn counter (Blue Player since it's Turn 1) rolls a Red defense die.  On a Block result they choose if they want to resolve theirs first or second.

Playing Nicely With Others:

So, we already know that the Wonder Twins are a good duo.  Does Han work well with either Luke or Leia?

Probably.  Much like Luke he's good at dealing with enemy troopers, which I don't know if you've been reading up on what is considered "the Meta" right now, but it's a lot of troopers.  So he can be plugged in for Luke provided you have some idea of how to deal with enemy Jedi if they show up.  Leia can hand dodge tokens for his Reckless Diversion if you're lucky enough to draw her command token (Improvised Orders?).  Her 1 Pip can be good, but not great all the time, so you don't have to feel bad about including Ambush and Han's 0 Pip.

Buddying him up with Luke is more difficult, as it takes away Leia's support aspect.  And you'll possibly want to leave out his 0 Pip for Ambush because you definitely aren't dropping Son of Skywalker.  Still, his 3 Pip command card is very powerful for Jedi vs Jedi fights, delaying the obvious Son of Skywalker or Implacable (and letting you use your own).

Han likes Infantry if anything.  None of his command cards really boost anything besides Troopers and himself.  Sorry Airspeeder fans, nothing for you here.  He's probably going to work really well with Commandos once they come out.

Look for Han as kind of a middle-of-the-road commander.  He's better than Leia as a "cheap" single commander as he can get into the front lines and defend better than she can, and he can work with Leia or Luke as well.  His Command Cards give you quite a bit of control over the tempo of the game.  He's not quite "plug and play" like Luke is, but he's going to be a good commander in the years to come.
Incoming Transmission From: Biggs at 15:02
Email ThisBlogThis!Share to TwitterShare to FacebookShare to Pinterest
Labels: Ground Commander's Guide, Han Solo, List Building, Star Wars Legion