Here's an article that has been asked for, but difficult to write.  How do we talk about utilizing different units in our Legion armies and the best strategies for doing so?  Well, the best way to do this is to look at general battle strategy.

In Legion and in real life, boots on the ground are what gives you control of an area.  More than half of known objective cards are scored by trooper units only, and the other two are easier to score with troopers (Key Positions / Breakthrough).  Trooper units are the easiest unit to get cover for.  Chances are they make up the bulk of your forces. 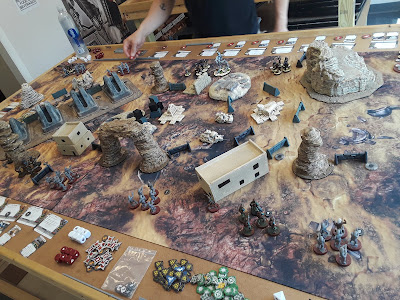 Most are very good at hunkering down behind a barricade and keeping enemy troopers form advancing towards them.  That isn't to say that is the most effective thing that they can be doing at any point in time, but Imperials - specifically Stormtroopers with DewbackLetticeTomato-19s - are built around doing just that.  Corps units in particular will form the core of your line - where you draw in your head the territory that you control - and the core of the enemy line - where they control.

Let's take a look at a Turn 1 line in a Grand Army battle.  it's easy to figure out where the lines are:

In between the lines is the "No Man's Land" - areas you have to cross before you can secure territory within the enemies' lines.  Let's see how you did:

So lots of empty space to advance into and hold, but the lines are pretty solid.  You can see where each player is set up.  Let's look at one a little more tricky - what do the lines look like now that we're in Round 3?  Same game. 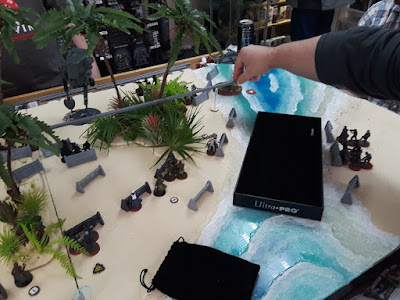 Things have gotten a bit more complicated - but you can still see what territory the Rebels could say they hold, and where the Imperials have pushed forward to.  That being said, the Imperial units at the tip have been out flanked, and aren't long for this world. 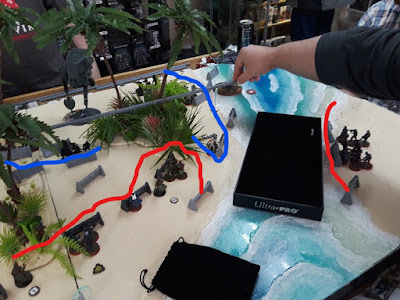 But what about that Airspeeder?  Doesn't it complete the Rebel line?  No, and do you know why?

What do I mean by Cavalry?  I mean units that are relatively fast moving, and relatively unaffected by incoming fire.  Cavalry doesn't really hold territory by itself, it wants to work in conjunction with infantry to break an area of the enemy line to let the infantry take and hold that area.  It creates the opportunity for Infantry to advance.

Consider again that Airspeeder - it has locked down that enemy line - they have to deal with the Airspeeder and can't shift to reinforce the bulge down below.  Let's look again at the line in Round 4: 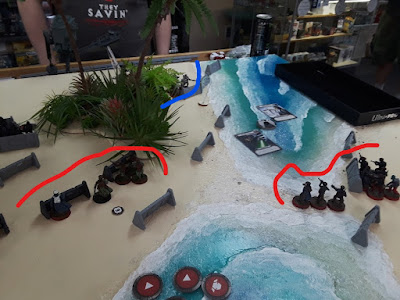 Now the Rebel lines are moving forward, and the Airspeeder has broken through into the backfield.  It will continue through to cause more chaos, and the Imperial troopers have to focus on it instead of the advancing infantry.

That is the other concept behind cavalry - by suddenly being behind where the front lines are, it forces the enemy to react to its current location, and continues the breakthrough to other parts of the line besides where it broke though.  "Rolling up the flanks". 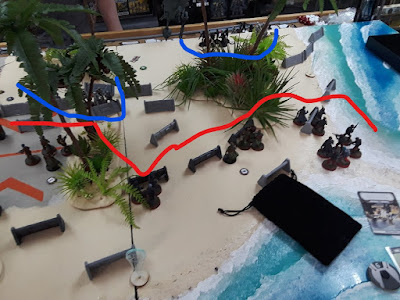 So, what does each role?

Your Corps units are typically your infantry (though a couple of hybrids exist).

Cavalry are fast moving units that can hit hard and suppress the enemy.  Airspeeders and AT-RTs (especially Flamethrower and Rotating Blaster variants) fill this role on the Rebel side, while the Imperials have Speederbikes and AT-STs.

Luke due to his speed, ability to ignore terrain, and heavy damage is also able to be used as a Cavalry unit - you can throw him at an area and follow up with an infantry advance behind him.

Vader doesn't quite work the same way due to his slower speed.  Instead he, Snowtroopers (especially with Flamethrower attachments) and Fleet Troopers are what I would consider Heavy Infantry or Assault units.  They're the best at following up the Cavalry push.  Mopping up the survivors, holding the territory, and blunting any counterattack.

Putting it into Practice

Do you see where Luke and the AT-RT are?  Both are in position to move forward and hit the infantry, while the Z-6 troopers are in place to take advantage of the breakthrough.

That's it for this article.  Hopefully it has been instructive and gets you thinking about how to use your forces more effectively!  Got any suggestions for new articles, be sure to let us know!
Incoming Transmission From: Biggs at 15:49
Email ThisBlogThis!Share to TwitterShare to FacebookShare to Pinterest
Labels: Movement, Rebels, Star Wars Legion, Strategy, Tactics