Kits are showing up for Legion, and Armada's Store Championships are in full swing.  So lets take a look at the tournament structure of both, and look at some terms common to the tournament scene.

Control Your Destiny:  Simply put, this concept is that you want to be able to win the tournament by your actions within your remaining games.  No other game is important to your ultimate victory or loss, just your own actions.  If you are currently in the lead with the most tournament points, you are typically in control of your destiny.  In theory, all players should be in control of their destiny at the beginning of any tournament.  You want to control your destiny until you are locked into position.

Locked:  To be "locked" you are either guaranteed to place or not place at a certain point.  Good if you're "locked" into first place or the cut, bad if you're locked out.  In theory, no player should be locked into any position at the start of any tournament.  By the end, every player is locked.

Seal Cub Clubbing Club:  The fine art of getting randomly matched up with a bad player or bad match-up in Round 1, and clobbering them mercilessly.  Depending on the system, this can be a great benefit.  At the very least, it's an easy win.

Submarine - Used as a verb, to submarine is to lose an early round, and then win your way back into the winner's circle by playing worse opponents.  Because of how Swiss style pairings work, Submarining can let someone down in the score board to vault up into contention late in the tournament.  That being said, it has a much lower margin for error than sitting at the top tables, if only because another loss can lock you out of contention, and you might not even be in control of your destiny.


Your typical Armada tournament is a 3 round affair, only expanding to 4 with a cut at the 28 player mark, and only then with Advanced Structure for the tournament.  The game lives and dies by the Swiss.  So, how well do you want to do?

If your goal is to win the Swiss round, either because there is no elimination round, or because that is frankly the best way to Control Your Destiny.  So you want to win, and then to win big.  In 3 round tournaments, there are usually too few players and too many variables to have a good idea of what you are shooting for in terms of points, but to win you'll most likely need to win out by at least a moderate amount.  In 4 round (or greater) tournaments, they have historically had 8 points average per round be a safe bet for making it onward.  Thus in the 4 round tournament, 3 big wins and a single small loss can get a player there, as can 4 solid wins. 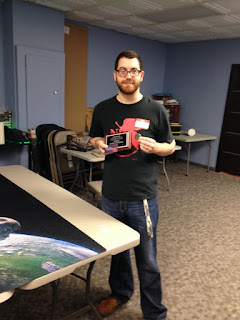 Typically, if you are playing with that 4 round Swiss with a top 2 cut, the best player who never lost makes that cut, but then you have the question about who the second best player is.  Because of the tournament point system in Armada favoring big wins and small losses, the second player could be someone who won big and dominated the top tables, and lost small in the final round to hang on to their #2 slot.  But more likely, it is someone who had a small Round 1 (or Round 2) loss and Submarined back up by winning big at the slightly lower tables.  This is unfortunately not a scoring system you can count on, but it does give players who managed to mitigate an early loss the chance to bounce back.  It should never be a strategy to count on, as it gives up Control of your Destiny, since you will likely need the top tables to either have dominant victories (to boot one player) or play close (to sneak past both players) and for yourself to have a dominant victory.

Well... kinda.  Look at that 4 round tournament, and know that you're aiming for 32 points over 4 rounds.  You need to average 8 points per round.  If you look at it from the sense of minimizing risk, 8 points for the bye is exactly what you need out of each round.  No need to play, no need to roll the dice.  No need to take any risk, you're just 1/4 of the way there.

This is great if you're an excellent player, and confident in your ability to get 8 points per game on a regular basis, no matter who you are matched up against.  Especially if you are in a higher level competition.  If you are NOT one of the Armada elite, it is a dirty trap.

The other way to look at it is that you can only lose 8 points total over those 4 rounds, and by taking the bye you've given up 2 points right off the bat!

Consider the Regional level tournament.  Let's suppose you are a solid but not World Class player.  You've won your local store championship, but haven't won a Regional before, much less done well at Worlds / Nationals / Continentals.  You've brought a solid list that can win big.  Is the bye the right choice for you?

No.  You're looking to win big, and the Regional means that your best chance to get that big win is Round 1.  Anyone can enter a Regional, and you've got a decent chance to be paired against someone who's list and / or skill level match up really well against you.  It is too long to go into, but as your skill level decreases, you want to increase your variance if you want a shot at the top, and make it so that if you get lucky, you can win big.  After all, if you don't get lucky, then you're no worse off than if you played things safe.  So, you want to chase that 10 point win, rather than take an 8 point bye.

Enter the Seal Cub Clubbing Club.  As a good player with a good list, you're entering Round 1 hoping to be matched up against a Seal Cub - a player who is not good, or who doesn't have a good list.  Someone you can win big against, and turn that 8 point bye into the 10 point win that lets you play safer in later rounds, and giving you a leg up against the competition.  Then your goal is to win big at Round 2 as well, so that "just" winning Round 3 and 4 is enough to keep you at or above 32.  A very viable strategy, which you can change up if you don't do as well Round 1 - you just know that you're going to have to Submarine your way back to the top.

Alternatively, you're a great player, one of the best.  You know no matter who you match up with you're going to do pretty well.  You can win big, but you're trying to minimize your swings, and the odds of matching up with a quality player or a bad list matchup (you've planned for what's going to be at the top tables, not random jank after all) outweighs the benefit of getting 10 points for sure.


The Interesting Case of Legion

Legion... isn't Armada.  There are not variable tournament point lists, there is no MOV.  There is only winning, and losing.  The only stat that matters is WINS.  I've said in the past that I'm not sure how great this game will work in a tournament setting, but FFG has found a large enough round hole to shove this square peg.

So let's look at what we want to do with Legion here.

It's easy enough to see how the wins / losses will shake out.  For every round of gaming scheduled, take the total number of undefeated participants and divide by 2.  Ties are not possible, after all.  So, looking at Basic Structure - if you have 8 players, there are 2 rounds:

Whelp, that's the tournament.  Who won?  Good question, since there's 2 players who are undefeated.  We're off to tiebreakers!

Tiebreaker #1 - Strength of Schedule.  You're going to want to root for every player that you played along the way.  The better they do, the better you will do in the tiebreaker.  That guy you beat round 1?  Better hope he won his game.

Tiebreaker #2 - Extended Strength of Schedule Well, let's say both the undefeated players played players that won Round 2 in Round 1.  Now we take all the opponent's strength of schedules (so your opponent's opponents) into account.  Oh god.  Oh god why?  Have fun doing this without a spreadsheet or some kind of computer program.

So, worst case scenario:  90 players.  5 rounds of play and "just" a top 2 cut.  Obviously a major tournament with that many players, right?

It becomes entirely possible that as an undefeated player, you don't get to play in the top 2 playoff, because the guy you beat Round 1 decided to drop after playing you.  Or because you were the one that got randomly matched up against a "no win" player in Round 2 and because your SOS never recovered, you were always matched low.  Now, this is a definite edge case, and you need a LOT of games to shake out this way, but let's look at something a little more likely:

Again, you're going to be begging the guy you played Round 1 not to drop and get that Round 2 win.  In an interesting way, this gives us the opposite of a Seal Cub Clubbing Club, in that you want to be beating quality opponents in early rounds, so that they will boost your SOS as the tournament winds down.  Those early rounds, and the mostly random matchups you get there are going to be HUGE.

And what about byes?  Well, SOS is calculated not as a sum, but an average.  So you're ruling out the chance to play someone who goes winless.  That's a HUGE leg up in eventual SOS - you've eliminated a lot of potential randomness you have no control over.  Take that bye every single time.

Simply put, Legion is going to have some drama at some point in its competitive scene over it's tiebreakers and inability to sort players in early rounds.  Also, better go undefeated, or you've got essentially no shot at the cut.

Also, because of SOS tiebreakers, there's a pretty good chance the guy that lost to the undefeated guy in one of the later rounds gets in as the only 1 loss guy, just because they have someone with a undefeated record in their SOS.
Incoming Transmission From: Biggs at 17:12
Email ThisBlogThis!Share to TwitterShare to FacebookShare to Pinterest
Labels: Star Wars Armada, Star Wars Legion, Tournament