September was not a good month for any of us here at Steel Squadron, at least not for writing articles. 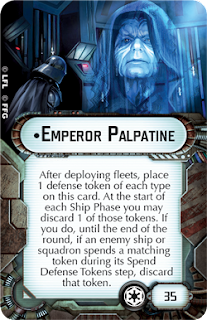 Let's take a moment to look at the new Imperial Commander that will be coming out early next year.  Emperor Sheev "The Senate" Palpatine is pricey for Imperial commanders, coming in at just under Darth Vader cost, making him the 3rd highest Imperial.  However in exchange you get a supercharged Intel Officer for all of your ships, affecting all uses of the named token (not one specific token).  But only one turn per token and one token per turn.


So, what's the best way to utilize him?  Well, let's compare the tokens and see when they are most likely to be used.

Evade - This token is best against long range attacks, so either on the approach or when disengaging.  You can use it on medium range, though it's unlikely to save you a lot of damage.   Most likely to be needed at Turn 2 or Turn 3.

Redirect - This is used early (and often) until shields are gone.  A low priority against big bruisers, but against smaller ships getting rid of it can save you a lot of hassle.  Probably needed Turn 3 or skipped.

Brace - This is the BIG BOY for you to burn.  You're going to want to trigger this one when you're putting out the most damage on a given turn, and when you still have a follow up turn (or better, multiple ships) to pour on the damage.  Turn 3 or Turn 4.  This will work against squadrons too, so be ready for a BIG turn here.

Scatter - Flotillas and Squadrons.  Again this is one you'll want to drop early as part of a squadron alpha strike.  Best time overlaps with Evade at Turn 2 or Turn 3.

Contain - Unlikely to be an important one to discard, unless you're running Heavy Ion Emplacements and they've stashed away a Damage Control Officer.


One or Two Big Turns


Using him on Turn 6 is not particularly helpful (no follow up turns) and using him on turn 1 is unlikely to be useful (poor chance of engaging the enemy that early).  So you're likely to get 4 good activations with him.  Assuming you're packing Long Range ships, and an alpha strike of squadrons your order should be looking like this:

Turn 2 - Evade or Scatter.  Either you're engaging his smaller ships at extreme range or you're blasting squadrons in an alpha strike.  Use this turn to close.

By the end of Turn 3, you should either have knocked out your opponent's shields (Redirect instead of Brace) or left him with no Braces.  That enemy large ship isn't long for the world.  But that means the rest of your tokens aren't particularly useful.  Maybe you can use a late Evade to frustrate ships trying to escape, or a late Scatter once flotillas are actually in range.  Redirect doesn't feel very helpful at all, unless you are replacing Brace with it on the major hit round against a smaller ship fleet.

Palps has the chance to be quite good, but much like Thrawn how good he is will involve a lot of planning and fleet construction.  Time will tell if someone can unlock his magic once he is officially released.
Incoming Transmission From: Biggs at 10:25
Email ThisBlogThis!Share to TwitterShare to FacebookShare to Pinterest
Labels: 2019, List Building, Sheev, Star Wars Armada, Strategy