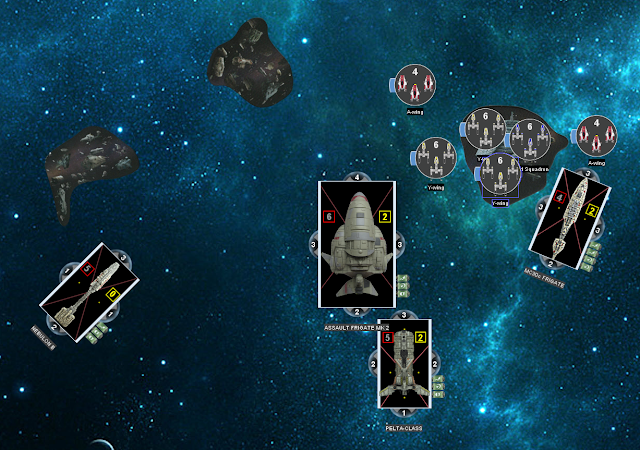 This is the Rolling Dumpster Fire.  The brainchild of not enough sleep and bad ideas.  The basics of the Dumpster Fire involves the sum of it's respective parts being worth more than than each one individually.  This is not a plug and play list, nor is this a list where ships can be effective on their own.  This is a list where otherwise "bad" ships work together to make a harmonious whole.

This is how you fly it.

What is the "Rolling Dumpster Fire"?

The "Rolling Dumpster Fire" or "Dumpster Fire" is a list that combines things not typically seen in the Armada meta to good effect.  The components look roughly like this:

Objectives (You'll be Second Player A Lot!)
Opening Salvo - SO MANY DICE!
Hyperspace Assault - SUDDENLY SALVATION (or Admonition)
Solar Corona - No, seriously, you setup first.  (You'll be playing this one a lot)

Rocks are your friends in this list, specifically the bigger ones that you can hide your squadrons in.  You want to be able to spring a Y-Wing run on one of their ships, and force your opponent to pull his fighters (if he brought them) back to deal with them. 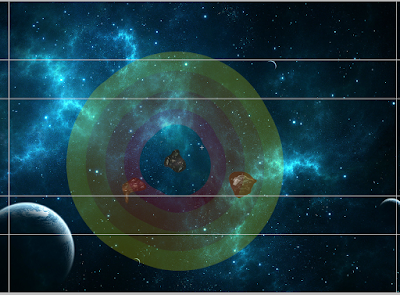 You'll want your rocks to look something like this, ideally.  Two debris fields to the left of center, one just at mid-field, and the other just outside of distance 5.  The station should be shaded right, and be about distance five.  This will give you a place to park your squadrons after you deploy.

Now you wait.  Your opponent likely only has 1 non-squadron threat, or wants their threats deployed close together to protect one another, and there is a good chance you are second player (and playing Solar Corona, because why on earth would they give you the other two?)  So here's your setup based on their threat locations. 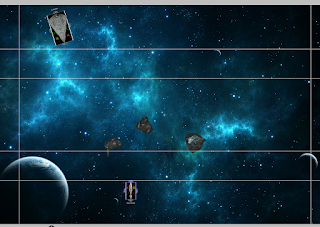 Your opponent has chosen to go to the left.  We'll start with Admonition assuming this is a non Solar Corona game.  His first piece is down, and we can now delay with squadrons until we are at deployment #4.  This should give us time to see if he puts more units in play and we have to change our strategy, or not.  Assuming he's committed to a Left Setup, the rest of your pieces will come down as so: 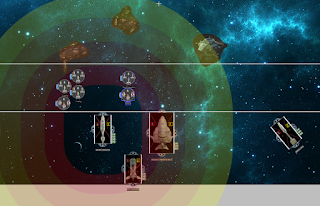 Garm will set up to the right of Admonition, ready to peal away and provide broadsides, while the Pelta can either turn into the fight, or follow Admonition as the first trailer.  Salvation takes up the rear, expecting to join the fight late around Turn 4 to start picking off stragglers.

The A's sit behind the Y's at startup, but the goal is to get the Y's safely on the asteroids, while keeping them in range of the squadron commands.

The end of Turn 1 should look something like this: 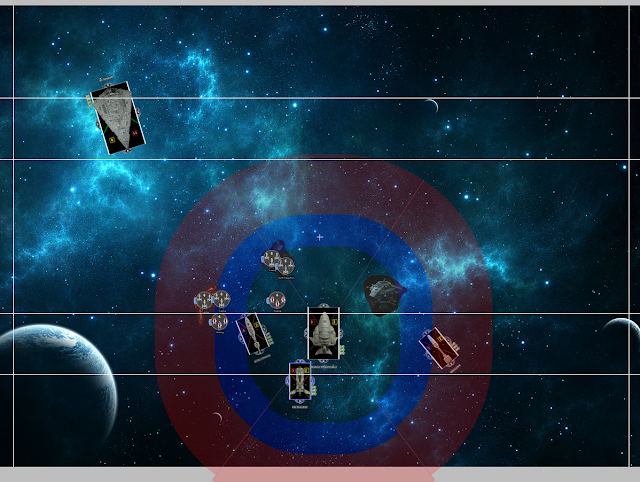 The idea again is to have the Y-Wings on the rocks, ready to jump off and hit a capital ships without worrying about being engaged by his fighter cover.  A-Wings are available to intercept anything that is thrown at your own ships.

Admonition is ready to jump up to Speed 4 with a dial / token, or slow down to 1 - thanks to Garm you will have excellent speed control, even if you spent the first turn forced to speed up - Admonition should be the last ship you activate. 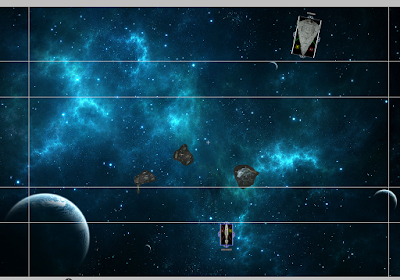 More likely, your opponent is going to look at the station and say "I'd like that for my big ships."  You'll set up much the same as before, but in a sort of mirror to your original setup. 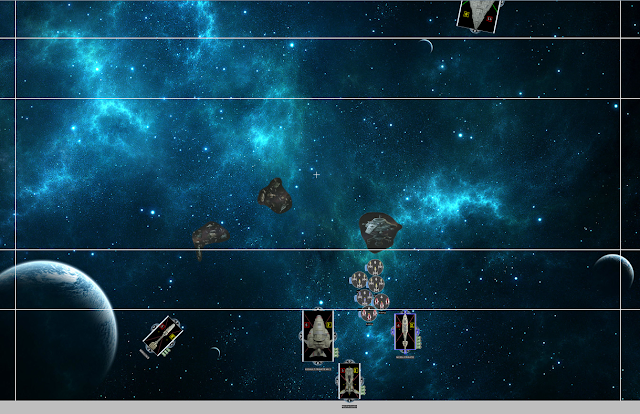 Again, Garm sets up outside of Admonition, ready to peal away with broadsides.  The Pelta can shimmy and follow Garm, or turn in to follow Admonition in depending on your assessment of the opponent.

The Y-Wings are set up to jump on the station, protecting them from being tied down by enemy squadrons.  A-Wings will protect your ships from enemy bombers, remember to keep them in range for Toryn Farr, wherever you choose to let her hang out.

Salvation is set to turn inside the rocks to set up his attack run around Turn 4, and mop up any survivors. 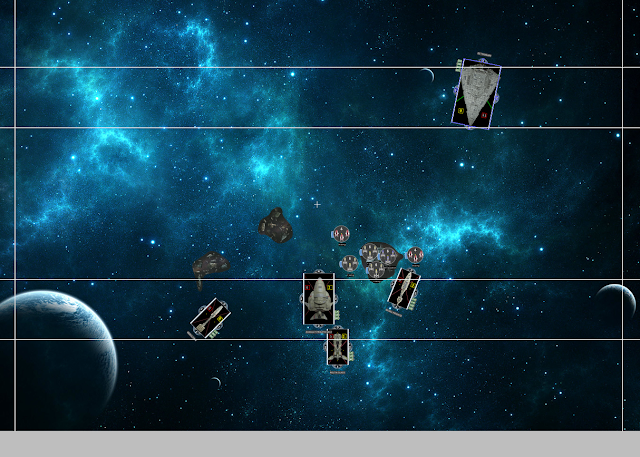 Here's your rough look for the top of Turn 2.  Note the squadrons hiding on the station, ready to jump in.  If you delay the AFII activation, you're almost guaranteed to have something move into range for your Speed 3 Bombers, and putting 3 Blacks and 2 Blues into something will really ruin its day.

Your A's are in Toryn Range in case they want to go after your ships with their bombers.

Here's what I do with my deployment Speed, Garm tokens, and dials.

Speed:
Speed 2.  On everything.  First turn you can change it to whatever you actually need, and Speed 2 doesn't tip your hand in any particular direction of slow vs fast approach.  You've got Garm, you don't need to bank a 1st turn Navigate.