We've talked about how this beautiful list came to be, and also how to fly it.  Shmitty even did an AAR already for a casual game.

Now it's time to put our child to the test.  At the most prestigious event they'll still let anyone (but not everyone) in to:  The 2019 World Championship.

This is what I would settle on for worlds after some testing.  The list had two big advantages going for it; the first was that against the right matchups it would win big, specifically against non-squadron big ship lists that could die the death of 1000 cuts.  The second was that against bad matchups, it tends not to lose big either, as once the tide starts to turn the MC30c or Assault Frigate can run for the hills, and I've usually taken at least something with me.

The list does have a lot of moving parts.  Part #1 is making sure that I have the token for Intensify Firepower, as most of my damage is tied up in Red dice, and being able to smooth out the damage valleys there is crucial.  This means usually a CF dial on Turn 2, and an Ahsoka of my final token on Turn 3, meaning Ahsoka is free to swap tokens on things Turn 2 / Turn 4.

Part #2 is remembering to ACTUALLY USE MY INTENSIFY FIREPOWER.  I had the most trouble remembering this in practice, and I fixed the issue by placing my Pelta card such that it would be the first card I would mess with, and by putting my CF token from the previous turn on the IF card.  When I would clean up my tokens and set my dials for the next turn, the first thing I would see would be the Pelta (Intensify!) and a token on the upgrade (Intensify!) and I would mentally tell myself that as I set each dial, then as I asked my opponent if he was ready (Intensify!)

Part #3 was putting Toryn Farr in a useful place.  She really didn't have a good home aside from the AF, and it wanted to run around the fight.

Anyways, onto the games... 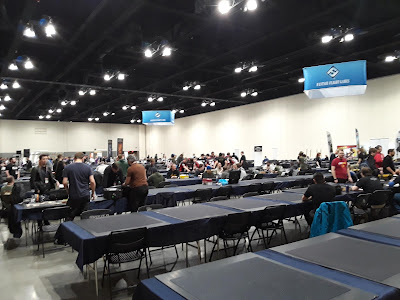 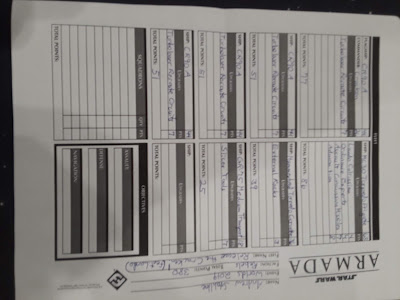 Whelp, I had figured Opening Salvo for one of my objectives thinking no one would be dumb enough to actually take it.  I hadn't counted on someone taking Cracken, much less hitting them first game.

He set up his ships all across the map, reading a jump to Speed 3 and a good fight.  I readied mine in the standard formation. 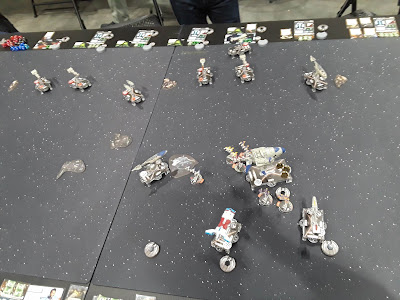 The plan was as follows - have him run his flank CR90s into Admo, have Admo erase them, and work on the center with my other ships. 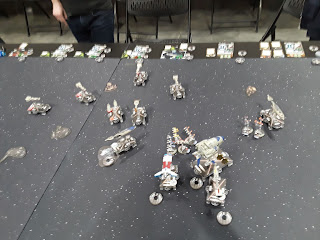 My plan was nearing fruition.  Sure his Admo wasn't going to get mulched, but he was well and truly out of the fight.  I can trade 2 of his ships for my Admo, and then mop up some more.  Good trades, close win. 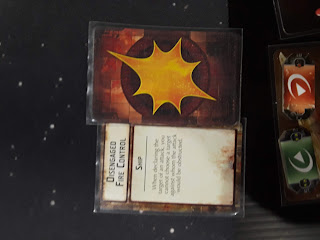 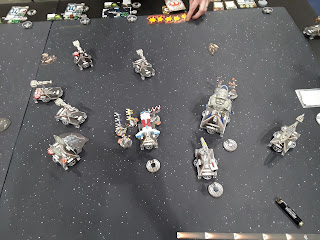 Admo died an inglorious death, unable to attack anything at all.  While my other ships managed to kill some enemy ships, it would not be enough.  My Pelta fell even as I caught a CR90 and the Hammerhead. 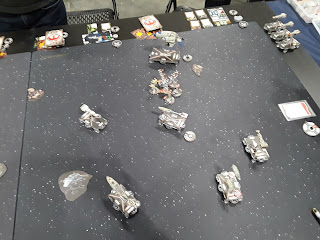 
The second matchup was against GiledPallaeon, a skilled Imperial player who decided to go Rebels for some reason.  He also chose to be Second Player against me, probably thinking I didn't have a good choice for objectives against him. 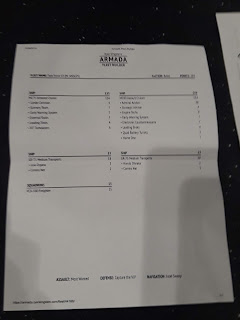 I didn't want Most Wanted, certainly.  Intel Sweep was a non-starter, because that was pretty much handing him 75 points.  But VIP?  I could work with that, by killing both his ships. 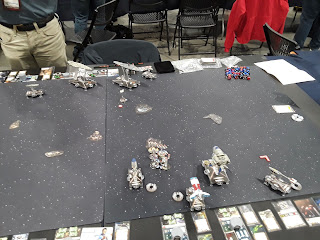 I set up in the usual way, with him setting up to put broadsides in front of my ships.  Still, I should be able to get in front of Ackbar's flag ship (the leftmost large) and then it's only 1 broadside I would need to take. 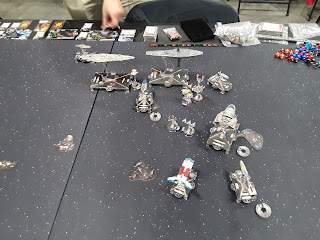 Admonition was able to last/first jump into position to double arc both ships.  I chose to push maximum damage into the MC75, and found the MC80 would not be able to Ackbar Slash Admo and still shoot at something else.  He chose to eliminate Admo, and pulled an Engineering instead of a navigate, keeping him from turning away.  All 3 of my remaining ships were in his front arc.  The AF finished him off, and the Pelta picked up the VIP in garbage time.  450 - 84 and 10-1 giving me 14 points and putting me onto a relatively high table! 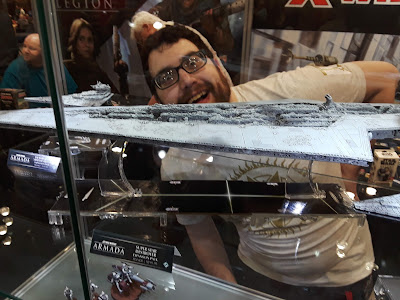 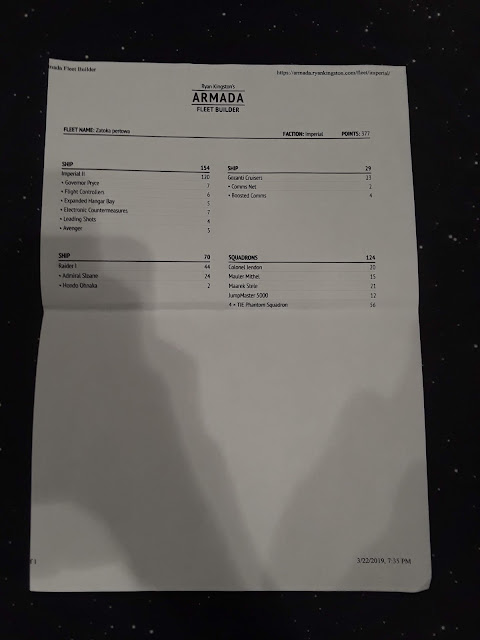 I'll admit, I've not flown against Sloane much, nor have I ever flown with or against Sloane Phantoms.  I had some ideas of what it would be like.  Those ideas were incorrect.

It was flown by a very good Polish player - Piotr - who was using some non-standard ship dials.  He was kind enough to show them to me each time he revealed them, because otherwise I'd just have been taking his word that they said what they did.

He also gave me an alt-art Polish card at the end of the game.  Very cool!  I gave him a World Cup Hondo as he was the only one to actually give me Hondo tokens at any point during the tournament. 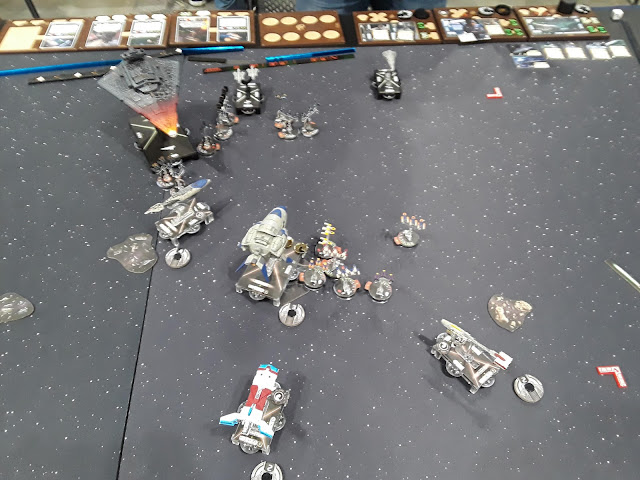 Consider this setup.  This is the start of Turn 2.  What dies in Turn 2 from this grouping?  Pryce is set to Turn 2 on the ISD so it goes last, letting Admo do it's thing and run away.

The answer is the AFII gets Aced by the ISD activation, as between the Jumpmaster and me not putting my squadrons in good spots (protecting Admo instead of Garm) I get drilled through my L side arc shield, without the ability to use any of my defense tokens.  The Assault Frigate dies at the end of Turn 2, with full Front, Right Side, and Rear shields. 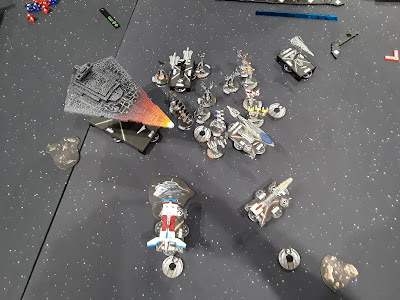 Then he Aces Admo in much the same way at the top of Turn 3.

Neither the Pelta or Salvation are good at escaping, and both are brought down by squadrons.

I took out the Gozanti and some Phantoms, but it's not enough to get me above 100 to sneak in an extra point out of the loss.  1-10 loss that I can't afford right now. 15 points.


No dang it Opening Salvo is not how you get a BIG WIN. 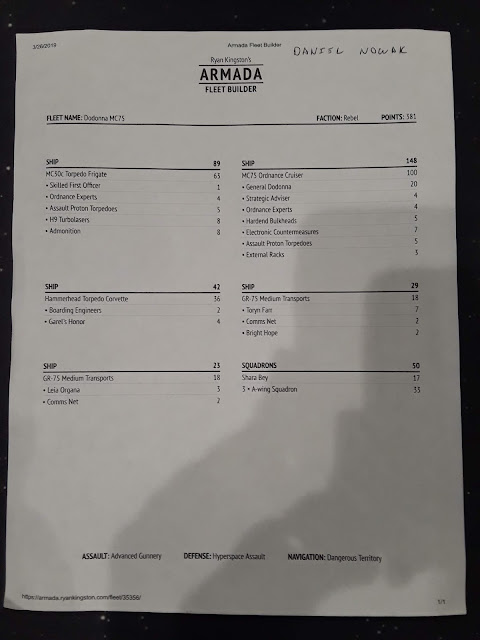 I wasn't happy with the squadron compliment he was bringing either.  A-Wings and especially Shara could lock down my Y-Wings for too long for them to get in on the action.

He really wanted to go for that brawl though, pushing all his stuff into the middle. 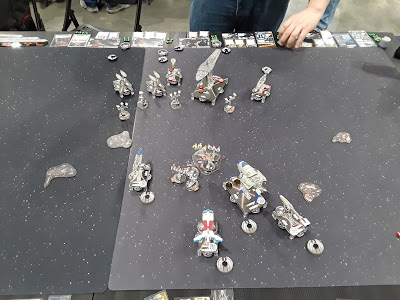 I was able to put a lot of damage onto the MC75, focusing it down as it wound up caught in the bubble in the middle, as I fed A-Wings to Shara.  His Admo just missed a side arc on my AF, letting it live long enough to almost mulch the MC75, then ram it for the kill.

Or not, because he had Hardened Bulkheads.  Whoops.  Salvation was forced to finish it off instead.  At one point most of my ships were at Speed 0 to keep them from ramming one another and feeding points to the Opening Salvo.  Eventually I was able to drop Admo and the Hammerhead for the table, but my Admonition who had been rammed twice wasn't able to repair both damage cards.  I had an engineering dialed in, but the Hammerhead died at the end of Turn 5.  With my squadron losses, it was 182-400.  218 MOV, and just barely out of a 9-2.  8 points got me 23 points total for the day, so probably not enough to make top 40 and continue.  How annoying, to miss out on 25 points by a total of 3 MOV (60 MOV loss in Game 1 being the other point).

All in all I had 4 very fun games.  I wish I hadn't had to learn about Phantom Sloane that way (and in fact a different looking Phantom Sloane wound up winning the whole thing the next day) but in the end I had a great time, and could look forward to the next day being a battle of the blogs between me and Geek19, who's Leia list had fallen on hard times.  We made a fun bet about writing an article for the winner of our grudge match about which of our favorite commanders were better... 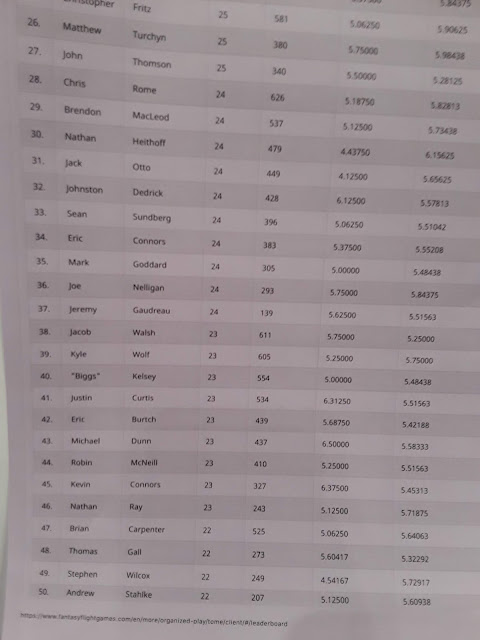 I guess it's better to be lucky than good.