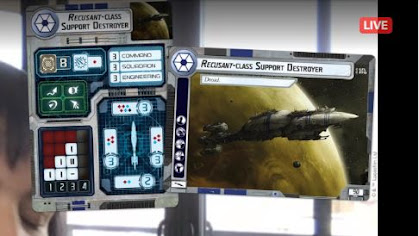 The general idea is to just go wild and see what Grievous and the new ships can do, and hopefully play some objectives that I haven't before.

Game 1 was against MRKS, a German (I think) player:

We played my Rift Ambush after he took first player against me.  His goal was to swing his 3 Battle Refit Hardcells down my right flank to splash the flagship, while my goal was to hit them as they came, while swinging the Providence up around the rift to catch his flagship.  Goal:  Kill all 4 Hardcells while losing little of my own ships.
Reality... was slightly different.  I was able to weather to storm with Grievous and get 2 of the Battle Refits and hit the flagship with the Providence.  His Providence though was able to maneuver itself in front of mine and wear it down.  Net result, my Providence, and the Munificent down, for a 6-5 loss.

I like my list.  There are some tweaks to be made - Wat Tambor wasn't really used at all, and neither were Flechettes.  But overall the concept is strong.  General Grievous is good, and really forces difficult decisions, and makes your own decisions very, very easy when it comes to spending tokens.
That decision being to always be spending them.  Make your opponent decide if he wants to give you them back, at a rate of 8 points / token.
Incoming Transmission From: Biggs at 19:57
Email ThisBlogThis!Share to TwitterShare to FacebookShare to Pinterest
Labels: General Grievous, List Building, Star Wars Armada, Tournament