Welcome back everyone.  Over to the Empire this time for a look at the Gladiator Class Star Destroyer (GSD).  At the moment, the smaller and faster of the two ships in the Empire's fleet, it is also capable of throwing out an impressive amount of damage.  Like the CR90 Corvette and the Nebulon B Frigate, the GSD is a small based ship.  But unlike it's Rebel counterparts, it serves a completely different role on the battlefield. 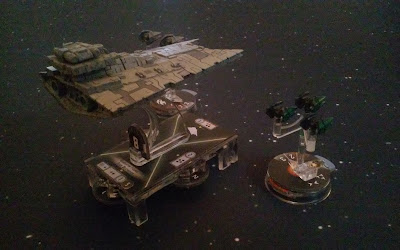 The GSD flanked by it's standard squadron compliment of 2.

The GSD comes standard with a Command of 2, meaning you will need a little bit more planning than the CR90, but still less than the medium ships.  It also means that it can hold 2 command tokens at a time, something the CR90 cannot do.  It also comes with a Squadron value of 2, making it an option as an escort carrier, though it is infrequently used as such.  It's Engineering value of 3 means that it can repair hull with a single dial, or repair multiple shields with a dial and token.

Both models come with a hull of 5, which can be improved to 6 with Admiral Motti as their commander, as well as 3 shields fore, 2 on the sides, and 1 aft.  Defensive tokens are also standard, giving one evade token, one brace, and one redirect, making the ship a difficult nut to crack at range, and a capable brawler up close, but weak to brawlers that get in behind it.

Speaking of upgrades, beyond the Support Team, the GSD has access to 2 unique Titles, Officers, Weapons Teams, and Ordinance.

This ship is a brawler, designed to get up close and let a punishing blow from it's fore and side arc against anyone dumb enough to stay nearby.  It's side arcs, significantly larger than it's fore and aft, also come with the biggest potential damage (average 1 damage per dice / 4 damage), though without any chance of accuracy rolls, it is more of a finisher than a hay-maker of say, a Victory II's front arc.

The GSD2 weighs in at 62 points, just 6 more than a GSD1.  For those 6 points, anti-squadron battery is upgraded from 1 Blue to 2 Blue, and the side arcs are changed from 4 Black to 1 Red / 3 Black.  This gives the GSD2 a much better anti-squadron roll (average 1 damage to rebels) and adds a chance of accuracy (1/8) to it's side arcs.  It also lets it ineffectively plink away at rebel ships from the side arc at extreme range.

This ship is still a brawler, but it can also be used to provide anti-squadron fire.  While it doesn't really change the ship's intrinsic nature, the GSD2 gives a few extra options over the very one dimensional GSD1 - though what the GSD1 does it does very well.

The obvious Commander for a GSD heavy fleet is Admiral Screed.  The original Gladiator, Screed lets you spend a die (that blank you just rolled) to change another die (that other blank you just rolled) into a face with a crit icon (like that Crit / Hit on all your black dice).  That's at best 2 free damage, and at worst a guaranteed Crit (spend a Hit, to change a Hit to a Crit/Hit - no net damage loss).  Tarkin gives the Gladiator a free token every turn, probably a navigate that the gladiators particularly want.  Motti is perhaps least effective, giving a mere 1 hull to each of your gladiators.

Unique Titles for the GSD range from interesting to spectacular.  The Insidious (3 points) gives you the option to use your Black dice at Medium range, but only if you are attacking a rear hull zone.  Good for use on a flanker, to give yourself some extra room in case your poor turn radius makes you overshoot your target a bit.  Nothing worse than getting all the way past your target and finding you can't actually shoot them because you have nothing but 4 Black in your arc.  The Demolisher (10 points) though is a game changer.  Unlike every other ship in the game, the Demolisher lets the GSD fire it's first shot, move, and then take a second shot once the maneuver is over.  This really is what lets the GSD bring those big scary 4 dice side arcs into play, and lets the GSD actually chase down opponents that could otherwise disengage.

For Officers, Wulff Yularen (7 points) gives the GSD the ability to keep up a steady supply of their favorite token - an excellent combo with Engine Techs or Nav Team to keep the GSD pointed the right direction.  Director Isard lets you look at the command dials for an opponent.  Admiral Chiraneau (10 points) works if you are going with a carrier build, allowing you to disengage ships (or Mauler Mithil crash a ton of damage every turn).

For the non-unique officers, Veteran Officer is the poor man's Wulff, giving a free token once per game.  Intel Officer lets you take advantage of your lack of accuracy, by forcing the opponent to make a decision before spending their best defensive token.  Defensive and Weapons Liaisons aren't as useful unless you are running Tarkin and even then for the Gladiator, there really isn't any dial that is exceptionally better than an equivalent token.

For Weapons Teams, Flight Controllers work well with an carrier type build.  Gunnery Team works well with the Demolisher Title, letting you fire, move, and fire again at a now much closer target.  Sensor Team is good with the GSDII, letting you spend a die to make your side arc's one Red die into a guaranteed Accuracy result.

For Support Teams, Engine Techs are amazing, especially when combined with Demolisher.  Being able to move twice (and covering a full 90 degree turn between your original move and the bonus 1 speed maneuver) means lining up shots is much easier.  Without the Demolisher it is still good, giving the GSD the maneuverability and speed of an unmodified corvette every time it takes a maneuver action / uses a maneuver token.

For other upgrades, the Nav Team gives the GSD a chance to add additional yaw from a maneuver token when going speed 2 or 3 for half the cost of Engine Techs (4 instead of 8).  Engineering Team meanwhile gives your GSD an effective Engineering Value of 4 (2 shields regained) for a dial, or 3 (repair a hull) from a banked token.

Finally, Ordinance gives the GSD a lot of extra punch.  Assault Concussion Missiles (7 points) add an unblockable 2 points of damage (1 to each adjacent hull zone) if you can get a Black Crit.  For a ship low on shields, that may be a final blow in and of itself.  While Expanded Launchers at 13 points make your front arc even scarier than a VSD's at close range, giving it a bonus of 2 Black to a total of 2 Red / 4 Black (5.5 damage average / 12 damage potential vs Victory I at 5.25 average / 12 potential)

With those upgrades in mind, and the GSD's base stats, here are the roles that it can fill within the Imperial fleet.

Brawler - This is obvious, and what the ship is really designed for.  It wants to be up close throwing those black dice.  The issues for it are that without ordinance upgrades, the ship isn't really that much more threatening at close range than a AFMkII is at long range.  At a minimum, Assault Concussion Missiles (7 points) on a GSD1 (63 points total) will let it punch above its weight class, and really mess up a Nebulon B or Corvette's day in one pass.  It doesn't have the hull to brawl for long in a pitched battle, so make sure it can take more points than it gives your opponent.

Flanker - A hyper-mobile version with Demolisher / Insidious, Engine Techs, Wulff or Tarkin, and season to taste with ordinance and Weapons Team.  Expensive but devastating to an opponent if it can get behind its main force.  Easily able to take on other flankers, outfighting what it can't outfly, and outflying what it can't outgun.

Navigation Objective Ship - All you really need are Engine Techs and a way to get reliable maneuver tokens (Wulff / Tarkin / Just Maneuver all day err'y day).  Better at flying and turning than anything short of a Corvette.

Anti-Fighter Cover - GSD2 can do a passable job as an anti-fighter ship all by itself, but Gunnery Team can let it shoot both at other ships and the squadrons in between.  Or...

Escort Carrier - Tarkin / Admiral Chirneau / Flight Controllers let you make a close quarters escort carrier that can shoot 2 anti-squadron dice (GSD2) redeploy fighters at will, or escort Rhymer and 2 pals (and their 3 black dice) and do what rebels like to do with B-Wings, but at longer range.  All for cheaper than you'd have with a VSD.

Area Denial - GSD1 with Expanded Launchers is a (slightly) cheaper version of a naked Victory 1 to block an very specific objective area.

That's it for this installment.  Know anything I missed?  Any other roles for the GSD, or good setups for it?  Let me know in the comments!
Incoming Transmission From: Biggs at 18:46
Email ThisBlogThis!Share to TwitterShare to FacebookShare to Pinterest
Labels: Armada, Commander's Guide, Gladiator, Gladiator I-class Star Destroyer, Gladiator II-class Star Destroyer, GSD, Imperials, Overall, Strategy, Tactics