Hello again everyone.  After discussing all three of the small base ships, today we are finally going to start discussing the two Medium ships of wave 1, currently the largest base ships in the game, and we are going to start with the Victory Class Star Destroyer (VSD).  This ship represents a major departure in terms of stats, strategy, and roles within your fleet from any of the small ships.

The VSD comes standard with a Command of 3, the highest currently in the game, shared only with the other Medium ship, the Assault Frigate.  This requires that you plan several turns ahead what sort of command you will need for that turn.  It also has the highest native Squadron value, also at 3.  The ship excels in a Carrier type role, and can do a passable job even if it isn't specifically upgraded for the role.  The ships also have a baseline 4 Engineering value, making the ship easily able to repair a few minor scratches with an engineering command (2 shields recovered)

For defense, the ship comes with 8 total hull (10 with Motti) making it the heartiest ship on the field.  For shields, it boasts a total of 3 on it's fore and side arcs, and 1 shield on it's rear arc.  For defensive tokens, the VSD has one Brace token and 2 Redirects, giving it impressive staying power, and the chance to utilize all of it's shields.

The drawback to this is speed.  The ship is slow, and not easy to maneuver, having a max speed of 2.  For that matter, the VSD only has a Yaw of 1 at either speed.

The VSD also has a standard anti-squadron armament of 1 Blue die.

For upgrades, all VSD come with Officers, Weapons Team, Offensive Retrofit, and Turbolasers, in addition to Titles and Commanders. 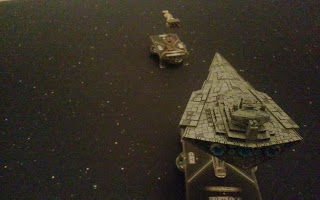 The Victory I-Class Star Destroyer (VSD1) comes in at 73 points, and comes with a bevy of long range and short range dice.  3 Red / 3 Black in the front arc, 2 Red / 1 Black on the sides, and 2 Red on the rear.  It also comes with ordinance upgrade.  Of all the ships, the VSD1 has the arc with the highest expected damage (5.25 average / 12 points maximum).  The caveat to this is that the arc only has that output at short range.  Long range the ship has the expected damage of the Nebulon B, with nothing in between.

It also gains the ordinance upgrade, letting it maximize the black dice that it has out of the front arc.

The Victory II-Class Star Destroyer (VSD2) is 12 points more expensive (85 points total).  For those extra points, you get your black dice upgraded to medium range Blue dice - 3 Red / 3 Blue in the front Arc and 2 Red / 1 Blue on each side Arc.  In addition, the Ordinance upgrade is swapped out for Ion Cannons.

Because of it's large hull, defense tokens and shields, the VSD makes an excellent flagship for your fleet.  For commanders, Motti will increase your hull value by 2 points, from 8 to 10, making an already difficult to bring down ship that much more rugged.  Screed works well in conjunction with either the Black dice of the VSD1, or with Crit related upgrades of Ion Cannons with the VSDII.  Meanwhile Tarkin's tokens work well when you can bank the tokens with your 3 command.

The VSD also has 3 different titles that improve different aspects of the ship.  The "Corrupter" (5 points) increases your BOMBER keyword squadrons speed by 1 when you activate them, making the ship an excellent carrier platform.  The "Dominator" (12 points) lets you spend your shields (up to 2) to add Blue dice (up to 2) to attack at close-medium range, giving you the chance to sacrifice your staying power for a more powerful attack.  The "Warlord" on the other hand lets you change Accuracy icons to a face with a Hit icon.  This title works very well with H9 turbolasers, especially for anti-squadron fire, but can also be used to increase your damage if you roll too many Accuracy tokens out of your front arc with a VSD2.

Officers for the VSD start with Admiral Chirneau (10 points) who improves a squadron activation to let you move engaged units at a speed of 2.  This can let you disengage bombers for a strike, or disengage wounded squadrons from a fighter scrum.  Combined with the 3 Squadron value, it lets you make the most of Admiral Chirpy.  Director Isard (3 points) lets you investigate command dials from an enemy ship every time you activate yours.  And Wulff Yularen (7 points) lets you make the most of the VSD's command value by preserving command tokens that you use for a later round.

For non-unique officers - Defense Liaisons and Weapons Liaisons are more useful with the large command value - being able to switch instantly to the appropriate command dial is helpful, especially with the ability bank tokens with your 3 Command Value.  For that matter, you might need to change your commands more often, especially with the 3 Command Value.  Intel Officer continues to be exceptionally useful for creating chances to disrupt enemy's defense tokens.  Meanwhile Veteran Captain is also useful for the same reason as the Liaisons, being able to get a necessary token at a moments notice.

Weapons Teams let you build your VSD for it's role.  Flight Controllers give you an anti-squadron boost to your activated squadrons.  Gunnery Team lets you make the most out of your large front arc, by firing at multiple ships that wind up inside it.  Sensor Team lets you guarantee an accuracy, and you'll likely have a blank die or two you spend with your attack.

For Offensive upgrades, Expanded Hanger Bay increases your Squadron Value up to 4, making for an even better Carrier.  Point-Defense Reroute lets you re-roll Crit rolls at close range.  Not very useful if you are already running Warlord / H9, but less expensive than that combo and can be used on multiple ships.

Ordinance upgrades can only go on the VSD1.  Assault Concussion Missiles give you an extra 2 damage for your critical effect, though on adjacent hull zones.  Excellent for a knock out punch or to limit the amount an opponent can redirect.  Expanded Launchers adds two more Black Dice for a possible 4 extra damage from your front arc at close range.

Ion Cannons can only go on the VSD2.  Leading shots let you spend a blue dice to fix a particularly egregious roll, and has excellent synergy with "Dominator"  Ion Cannon Batteries let you strip command tokens, or extra shields for a critical effect.  And Overload Pulse lets you exhaust all defense tokens - good if your ship is opening the attack.

Finally Turbolaser upgrades can work on any VSD.  Enhanced Armament lets you utilize your side arcs for long range combat - putting them at 3 Red dice and the same as your front arc.  H9 turbolasers, let you maximize your accuracies, by sacrificing a hit or critical effect.  Again, H9 and Warlord work quite well together, letting you turn a Crit to an Accuracy, and than an Accuracy to a Hit for anti-squadron fire, or a Hit > Accuracy > Double Hit for Red dice.  XI-7 turbolasers can help your knock out blows really count.  XX-9 Turbolasers let your big dice add multiple face up damage cards.

Area Denial - The big front arc with 6 dice is a wonderful deterrent.  The VSD is very, very good at picking a spot on the map and saying "Don't Go Here".

Carrier - The VSD with Expanded Hangar Bay can activate 4 squadrons per turn.  Flight Controllers and Admiral Chirpy make it even better.

Tank - The VSD is incredibly hard to bring down.  Though it is slow, it won't go down quickly.

Centerpiece - Because of how large and tanky it is, the VSD can become the centerpiece for your fleet.  It can handle a large number of points in upgrades and survive through to the end of the 6th round.

The Victory isn't a subtle ship.  It's big, it has a huge angry front arc, and it is very slow.  But it is a terror on the battlefield that moves slowly toward a point, and destroys everything that gets in its way.

Let me know what you think - did I miss anything?  Get anything wrong?  Next time we will be discussion the Assault Frigate Mk II!