Having previously covered the TIE Fighter and X-Wing, it's time to dip into the squadrons released with Wave 1.  The first of which is the Imperial's TIE Bomber. 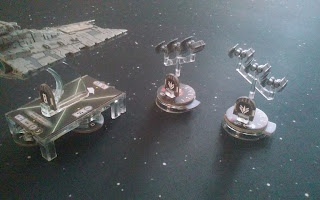 The most inexpensive BOMBER in the game thus far, the TIE Bomber comes into play for 9 points, just a single point over the TIE Fighter.  As a BOMBER, the TIE Bomber is capable of damaging enemy ships with Crits, and as such it brings 1 Black die for its Anti-Ship armament.

Unfortunate for the TIE Bomber, it also comes with the HEAVY keyword as well, which means that any squadron it engages is not prevented from moving or attacking ships - which means it cannot be used to screen your ships from enemy BOMBERs, not that you would want to unless no other squadron is available.  In addition, they sport 1 Black die for anti-squadron fire, making them not particularly useful for anti-squadron duty.

They do however take a beating.  5 Hull puts them on par with an X-Wing squadron in terms of damage taken.  They also are faster than that same X-Wing squadron, boasting a speed of 4 - same as the TIE Fighter.

The TIE Bomber is definitely not a squadron you want to use for space superiority.  That being said, it does have an important role in the Imperial fleet, and that is throwing that 1 Black at any enemy ship that had their fighter screen caught up in a dogfight elsewhere.  For the price of less than a single Corvette (36 vs 39 points) you can bring 4 Black worth of attacks that can hit out past medium range with a single squadron command.  That is something any opponent will have to respect.

Did I say "out past medium range" before?  Well, Major Rhymer takes the TIE Bomber, and any other Imperial Squadron you might have lying around without anything useful to do, and turns them into a mini-CR90B.  Any squadron at R1 of Rhymer can attack enemy ships at close-medium range.  Note, this also includes Rhymer himself.  And all of this for just 16 points.

Now, this would obviously make Major Rhymer a pretty big target for the enemy - to that effect, the Major has 2 Brace tokens to go with his 5 hull.  He also boasts an extra 1 Blue in addition to the usual 1 Black for TIE Bomber Anti-Squadron dice, though he retains the usual 1 Black Anti-Ship.

Major Rhymer wants to sit in a spot, surrounded by his friends, where he won't be bothered by enemy squadrons, and the enemy will be passing by, hopefully for multiple turns.  He is also one of the more important ships for Admiral Chirneau to activate and move away out of engagements.

In the end, Major Rhymer is one of the defining cards of Wave 1.  Like the Demolisher, Major Rhymer gives the Imperials a unique flavor - a way of bypassing the usual rules that force everyone to adjust their ordinary strategies in order to deal with it.
Incoming Transmission From: Biggs at 17:19
Email ThisBlogThis!Share to TwitterShare to FacebookShare to Pinterest
Labels: Commander's Guide, Imperials, Major Rhymer, Squadrons, Strategy, TIE Bomber