Longtime Readers of this blog, or people who actually browse the Academy, may remember a time when I discussed Tournament Points (I did that back in September, wow time flies!) and after the increase to 400 points and a new MOV / Tournament Point scale, this has needed an updating.

Well, here is that update. 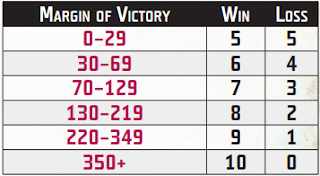 What this means, is that with 10 - 0 wins becoming harder to come by - can't just rush in for a table as your primary strategy like you used to (though some lists still try).  Instead, to grab a 10-0 not only do you need to do exceptionallly well, but you need a lucky matchup and some really poor play from your opponent.  And we've seen this bear out in tournaments, with the top players averaging closer to the 25 point mark, instead of the 28-29 points we were used to seeing.

Well, no, not really.  It's certainly true that you can't build an AFII, or even a CR90A w/ TRCs, and expect to be able to throw it away on a tabling and not lose out on a 10 - 0 opportunity.  Actually, the only ships cheaper than the 50 point threshold naturally are the CR90s and Raiders, and that's stripped down without upgrades.  With standard upgrades, you're only looking at a Raider I w/ Ordinance Experts OR a Title (48), or a CR90B w/ SW7 Ions (44) as a below 50 point option.  On the other hand, you can afford to drop 180 points and still be eligible for a 9 - 1.  That's a fully kitted out ISDII / MC80 with your Commander on board.

So, that means you're able to consider 180 points worth of your list as "expendable" - ships and squadrons you can afford to throw away to bag a larger prize, and still come out with a very respectable score.  The same internal calculus applies - figure out what in your list you can afford to lose, and still come out with a victory big enough to have a shot at the top spot.

Of course, that is all spherical cows in a vacuum, because as always objectives exist, and add more to the 400 point maximum that you are able to score in several cases.  Let's look at each, and how many points it can add to a maximum total for each side:

Most Wanted gives both sides more points to play with, but gives a stronger advantage in this to Second Player.  An extra 120 points from dropping an ISD brings a 10 - 0 win from a table into the 170 point range, or between 70-80 if you lost your own objective ship.  That's a good spread.

Much like Most Wanted, Advanced Gunnery adds a lot of points to the table for the 10 - 0 spread.  Even more for First Player than Second Player, as Second Player is almost certainly bringing it to augment a big ship, while First Player can attempt to throw off the objective ship (and point doubling) onto a small base ship.

Theoretically, Precision Strikes can put either player's score into the stratosphere.  That being said, it's been a VERY BAD objective for Second Player in the World Cup - take at your own risk.

The exact opposite of the other Red objectives, this is not an objective that favors high scoring games - while it can help you get a table by eliminating the opponent, it also gives an advantage to your opponent to play spoiler, as they score points just by damaging your hull.

Contested Outpost gives Second Player a chance to take and hold the outpost, most likely for at least the first 2 turns, if First Player can shake them off, and if they can get some tokens from the outpost, they are most likely looking at a net wash on points, and that is if they do very, very well.  Good objective for Second Player, wash for First Player (at least on points).

Another objective that benefits Second Player dramatically, as they will be able to get their guns on the tokens first, and likely be able to hold those tokens longer.  This one has such a chance of going WAY against First Player, that it is hard to advocate selecting it as First Player at any time.

No change in either of these to scoring, just deployment.

Realistically, this should be a wash for both players, as each can set up 45 points apiece of obstacles they can grab on turn 1 or 2.  But if one side or the other neglects the obstacles, it can be free points for the other side.

Another "token for doing a thing" like with Precision Strikes - this one does give a big benefit to Second Player in terms of deployment advantage though.  There are no hard or fast point limits for this one.

No change in scoring for this one, only death.

So each objective set has different ones that can increase the potential maximum, bringing 10 - 0 back into the realm of possibility, but only if there is actual objective play going on.
Incoming Transmission From: Biggs at 11:05
Email ThisBlogThis!Share to TwitterShare to FacebookShare to Pinterest
Labels: Armada, Objectives, Strategy