Taking the Station - Let's Build to Win the Multiplayer Scenario

Finally there's more than 12 ways to play Armada!  FFG has released a new alternative game scenario replacing the standard 12 objectives and 400 point fleet building of the head-to-head game with a 150 point free-for-all.  The new objective - bring an objective ship to the station, placed in the center of the map.

Well, that's all well and good, but how to we maximize our opportunities to win the objective, and take the station for ourselves? 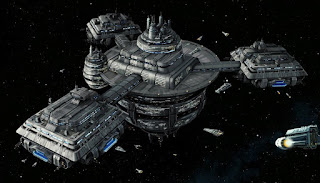 A few big changes are brought into the game prior to even thinking of building a list - for one the commanders are not used, nor are objectives.  For another, this is limited to 150 point fleets with a maximum 50 points of squadrons available.

In addition to this, initiative passes clockwise around the table, so the player who was First Player on turn 1, is Fourth Player on turn 2.  So no one will be able to activate last / first unless they have significant activation advantage, and then only for a single turn.  The bid is perhaps more important than before, though only one person can win the bid, and they determine the starting First Player (and thus every players initiative order for the game).

Scoring is key - players earn points for accessing the station in the following order:  50 -> 40 -> 30 -> 30.  Also, instead of earning points for defeating opponents ships, players earn points for ships and squadrons they still have on the table, meaning that any points spent for an initiative bid are lost, as they never even reached the table.  Thus, players are given an incentive to hold as close to the 150 point total as possible.

So, assuming you are right at 150, you manage to cap the station first, and you hold onto every ship you brought, the maximum point total available is 200.

So, going into this objective you have two big objectives that determine your score - the first being "Don't Lose Anything" and the second being "Capture the Station".  There's also another objective, which is "Keep Everyone Else From Winning", which you can accomplish by destroying their ships, and denying their objective ship from reaching the station.  Not getting onto the station at all is the same as being down 50 points to the first person that did, so it makes no sense to turtle alone in your corner for the entire game.  But losing anything is no good either, so you need to be defensive in your build.

Going with a crazy rush to the station with a fast ship and a high bid isn't the right idea either - yes you could be the first one there for 50 points, but then you are in everyone's guns, and you've given up some points in the first place to get that 50.  Best case scenario, you're looking at 153 points when all is said and done (no bid - got a CR90B w/ Engine Techs to the station, and dropped off the token, and have 102 points of ship playing keep-away back in your starting area.

Someone calculated that a speed 4 ship with Engine Techs (CR90B) could be within distance 1 of the station for the start of Turn 3.  Considering that this is effectively 10 movement, (though you can squeeze a bit extra distance with a larger base ships by turning hard just before you get to the station) you are looking at the following speeds to arrive on the station:

The only caveat to ruling out a rush strategy is that if you manage to get to (and past) the station, you can then use your ships to screen the station from other players, particularly if you don't think they can smash through your screen.  With that in mind, the key turn for your list will be Turn 3 or Turn 4 if you are rushing the station in order to secure the cap - as such, you want to shoot for First Player on that turn to give you the best chance of placing that first token.

If instead you are going for a later cap, but counting on better survival from your ships, you want to have first player for Turn 5.

Let's talk about the most survivable ships that you can bring, and what a typical ship might look like?


Building for Speed and Survival:


Imperials:  The Empire's fastest ship is the Raider, but it can be matched in speed by a GSD with Engine Techs.  Of these, the GSD probably has the better options to keep it alive - possessing a Brace and Redirect tokens, better hull, and better shield distribution.  Admiral Montiferrat can come onboard the ship to keep it safer at high speeds, and it can be a good deterrent once it arrives at the station, bringing a lot of big guns onto the target.

The ISD isn't much slower, and though it doesn't have Motti to give it an insane hull total, it is still the sturdiest Imperial ship and is the only one that can take a defensive retrofit if you grab an ISD2.  A Tractor Beam in the offensive retrofit slot can be used to mess up an opponent's plan to cap.

The VSD is really the odd man out of this matchup.  Taking a LONG time to get to the target, it may be able to find a role as a support ship to a main rushing ship - a chance to fill out the extra points on a GSD rush list, for example.

For squadrons, Imperial Rogues don't really have the speed to keep up with the ships making a quick push.  Regular Imperial squadrons are a bit specialized for this work - Interceptors and TIE Fighters die very fast and TIE Bombers could be affected poorly if any squadrons show up to oppose you.  Though some Bombers tagging along with a Raider might be a decent plan - the Raider can put out some good anti-squadron fire, and the Bombers can finish off the wounded, and have the hull to survive the alpha strike.


Rebels:  It isn't very fast, but the MC80 Assault is pretty much ideal for this role - with an ECM and Advanced Projectors, it is very difficult to kill, and Engine Techs at least put it on ISD territory, all with 15 points left to spend.  Good for a tough nut to crack that can sneak in a cap in turn 5 or turn 6.

You do get the only option with Rebels of a Turn 3 cap, with the CR90 w/ Engine Techs, though another fast cap option with better survival chances would be an MC30c going for a Turn 4 cap.  The amount of defensive upgrades you can put into one is staggering, and they have enough of an oomph to hit hard against any other ship going for the cap.  It's a pricey small base ship though, and you're pretty much committing to just one and a CR90 / NebB for support, or squadron support only.

A NebB with Engine Techs is an interesting option as well, though maybe not the best one - too many opponents to keep your side arcs protected.  An AFII is another option - cheap enough that it can bring squadrons along for the ride, and fast enough to actually get where it wants to be.

Speaking of squadrons, most Rebel squadrons are just too slow to come along for the ride.  Though the YT-2400 would make an excellent MC30c escort, and A-Wings could tag along with an AFII.  A command MC80 Independence could push a few Y-wings in front of it as it lumbers toward the goal, though that many not be the best use of its time.  There is no good way to get a sizable number of B-Wings into the fight - they're better off staying home for this one.

Of course all this is theorizing until we actually get down to play some games with this new scenario.  Have you had the chance to play?  Any luck or tips to offer?  Comment below!
Incoming Transmission From: Biggs at 01:49
Email ThisBlogThis!Share to TwitterShare to FacebookShare to Pinterest
Labels: List Building, Multiplayer, Strategy, Tactics, Taking the Station