Now we finally know all the upgrade cards that we will be seeing in the newest expansion, including our two new Commanders.  Both are defensive commanders, as opposed to the very offensive focus we've seen in Wave 2. 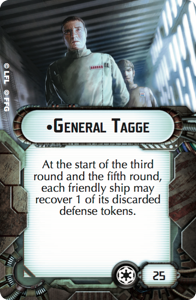 General Tagge - 25 points - "At the start of the third round and the fifth round, each friendly ship may recover 1 of its discarded defense tokens".

Let's face it, we know which token is likely to be discarded, and which token it is that General Tagge will be bringing back for the Empire on each of those rounds.  For the ISD or VSD, it will be the Brace token, and for the new Gonzati, it will be the Scatter token.  For one point more, and an ECM onboard, an ISD2 is better protected than it would be with Motti (let's face it, you're going to brace more than 3 damage with that recovered token).  This also soft counters most anti-token strategies, such as Intel Officer spam, NK-7s (which feel underutilized) and Nym (who folks have been raving about since Bomber Command Center and Toryn Farr have been announced.

All by himself, he adds another layer of danger to a Clonisher list, who now has to not only execute a perfect pounce against a big ship, but also has to time it such that the Brace isn't available twice.  Between that and Gonzatis (and Transports) laughing at a GSD1's broadsides, it won't be nearly as easy for the boogyman of Wave 2 to get the big kill it wants.

Tagge even works well with the GSDs, who have a tendency to shed tokens as they make their attack run, burning them just to survive.  Timing your attack run for Turn 4 means that you can be sure to have the best chance to rocket away on Turn 5.  Only the poor Raider feels somewhat left out, as it really doesn't look to lose it's Brace without being quite dead.

An interesting thought is how Tagge interacts with the Devastator.  It looks like when a token is brought back it is no longer a discarded token, and Devastator does not gain any additional dice, however this could make Devastator an excellent late activation Imperial ship - especially on turn 4.  Let your opponent pound on it, end the turn with engineering and a Devastating shot, and get back a token for the start of Turn 5.

Another option for utilizing him offensively is a VSD (or ISD) with both Needa and Turbolaser Reroute Circuits available.  For 82 points of Victory I-Class Star Destroyer (101 for a VSD2 and Gunnery Team), you have a long range attack you can spin up twice, all without worrying about losing your Evade.

Of course his ability works wonders with the Gonzatis, turning them into a frustrating annoyance for your opponent if he doesn't think to bring any accuracy dice.  Double scatter?  Oh well, got it back Turn 5!  And you don't want to waste that many attacks on a 23 point baseline ship.

Long story short, he looks like an excellent alternative to Motti for a spot as a low-cost defensive commander. 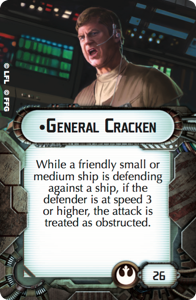 General Cracken - 26 points - When a friendly small or medium ship is defending against a ship, if the defender is at speed 3 or higher, the attack is treated as obstructed.

Now the first thought I had with him was "Admiral Montferrat, but for the whole fleet" and to a certain extent that holds true.  While you don't discard him if you overlap another ship, all your ships do become automatically obstructed against ships if they are going at speed 3 or higher.  For one thing, this commander is a direct counter to the very existence of the Gonzati Assault Carriers - can't shoot at something if your only die is removed from the pool after all.  For another, he only works on small / medium ships - but only Rebel small and medium ships can go faster than speed 2.  Future proofing or hints that there is a large Rebel speed 3 ships in Wave 4?

So if he works best with small and medium ships, which ones does he work with best?  MC30cs are an excellent option - dropping a dice completely is kinda like a poor man's evade.  CR90s also like flying at full speed around a fight, rather than directly into it (unless Rieekan is your commander, and even then, the CR90 isn't expecting to make it out alive).  Assault Frigates can also benefit from his leadership, though Speed 3 and lack of Ackbar makes setting up quality shots with them a tad bit difficult - but using them as a carrier with Boosted Comms may be the way to go.  On the other hand, Nebulon B's don't really enjoy racing in at speed 3, though it may be interesting to see a Nebulon B coming in at lightning speed out of the flanks.

Of course he works well with his featured expansion, the GR-75 Transport flotilla.  One less shot on them could very well be the difference between life and death - especially as they flash around trying to get Slicer Tools into the fight, or pulling close quarters escort for your bombers or fighters.

Here's the problem with that ability though - a little used Wave 2 upgrade that is Cracken's hard counter - Tractor Beams.  Any ship equipped with this 6 point upgrade can neutralize his protection very quickly.  Not only does this upgrade slow your opponent down (assuming no Navigation token), but it does so at the beginning of the activation, before you declare your targets.

Still, Cracken may be a great option for you if Mon Mothma is either too pricey, or you don't want to waste your evades on defense, and Rieekan is just too "murder / suicide" to you.  In terms of points, he's right in the middle of the road with Garm, less utilitarian but a very defensively oriented choice.


This article is part of the Upgrades series of articles.