Bomber Command Center is set to come out as a new fleet upgrade card with Wave 3 - though we do not yet know if it will come in both the Gonzati and GR-75 Transport, we do know a few things.  Namely, we know it's cost (8 points) and it's effect: 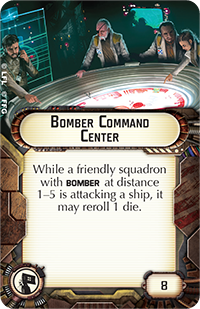 Let's examine it's effect, and which bombers it works the best with.

Editor's Note:  Some of my numbers (namely anything with 2 dice) is wrong, because I calculated it as both dice being re-rollable.  That is incorrect.  The actual numbers are close, but not quite right.

First off, let's look at the Bombers for both the Rebel and Imperial sides, and their anti-ship armaments.

From there, we can see what normal expected damage and the boost to damage from rerolls gets either side.

An easy enough side to look at, as there really are only 3 different types of Imperial bombers to look at.  The only unique in the group is Boba Fett, as Major Rhymer has the same anti-ship attack as his non-unique brethren.  Also note, while Darth Vader can use Critical Results as damage, he still doesn't have the Bomber keyword, and cannot be effected by this upgrade, or use Critical Effects.

As you can see from the chart, the damage for each goes up, with the TIE Bomber rising above 1 damage, the Firespray reaching near statistical certainty of dealing 2 damage, and Boba Fett creeping towards the all-important 3 damage roll.  Both Firespray and Boba Fett are all but guaranteed to do some damage, and the TIE Bomber is almost approaching statistical certainty (5%).

Of course, this doesn't add to the damage, it just makes the damage much, much more likely.

"Is it worth it" is the question though - it's definitely a force multiplier, and if you are taking a Gonzati already, the damage increase is straight up improved - provided you have brought at more than 3 TIE Bombers or at least 3 Firesprays (verses the expected increase in damage of just bringing an extra bomber).  Of course this doesn't take into account the opportunity cost of more squadron activations being required.

Here is where things get complex.  There are a lot of Rebel bombers, including quite a few unique Bombers with different dice characteristics.

The best straight increase to damage per point of ship is the B-Wing, which is unsurprising as it was already the best point-for-point Bomber in the game (speed not taken into account).  What is interesting, however, is it brings the X-Wing into a better position to contribute damage from anti-ship attacks than it's old anti-squadron competitor the A-Wing, which still averages .75 damage, but only has a .75 chance to hit.  Better hit chances, better average damage add on to it's previously only benefit of better maximum damage.

This also means that you don't lose as much anti-ship capability by bringing an X-Wing for it's role as an Escort, if nothing shows up to shoot at your other bombers.  It becomes a mostly reliable source of damage, while your other Bombers become even more deadly.

Again, 3 or more of any given Bomber seems to be the cut off point where the Bomber Command Center is more efficient in points than just taking another Bomber.  And again, this just assumes that you are bringing a GR-75 anyway, for the deployment / activation advantage.

Of course, the Rebels can't make anything easy.  Keyan, Dash, Luke, and Nym all have reasons some special dice abilities that cannot simply be done on the first chart.  So we'll look at two additional charts - one for Nym / Luke fishing for critical results and the other for Keyan and Dash using their personal reroll abilities.

If Luke fishes for the face-up critical or Nym fishes for the Blue Critical Effect (and not fishing for a Black Critical) we see two different changes - both have a 43% chance of getting the effect they want if they fish for it.  However, while Luke loses no expected damage, he drops significantly in chance to damage - over 10%!  And Nym, while he really is nearly certain to hit, loses out slightly in his average damage, dropping down closer to an average of 2.  Something to consider if you want to roll the dice.  You can also use Nym's number to calculate the chance of an accuracy if you need to fish for one on either a Scurrg or B-Wing.

The other edge case is Keyan and Dash getting extra rerolls, Dash getting one simply by default, and Keyan getting his if he can attack an unshielded arc.  Let's look at the damage each one gets with both reroll - the best thing they can do is reroll hits / misses with the first reroll, and stay put during the second to maximize their average damage, while keeping their chance of damage high.

Keyan is now averaging near 3 damage per roll, and certainly doesn't lose any chance to hit.  Dash also increases his damage slightly.  Overall, it's nothing you'll say no to, but you start to see some diminishing returns from the 2nd reroll.  Not something you should take specifically for Keyan or Dash, but it doesn't hurt if they are already in your roster.

Hopefully looking at the numbers will help you start thinking about how Bomber Command Center will be used in your lists.  Until next time, fly casual be the player you want your community to be!


This article is part of the Upgrade series of articles.
Incoming Transmission From: Biggs at 13:03
Email ThisBlogThis!Share to TwitterShare to FacebookShare to Pinterest
Labels: Armada, Fleet Support Upgrade, Imperials, Rebels, Statistics, Wave 3