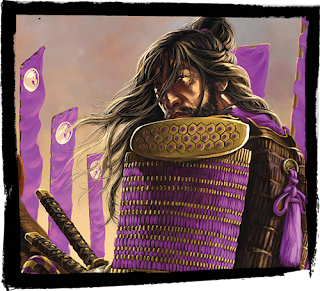 Way back when I was a high school kid, I remember seeing Legend of the Five Rings set up along with Magic the Gathering, Pokemon, and the various other collectible card games of the era.  I had a job that put gas in my car, and bought the occasional burger when I didn't want what was for dinner, so investing in another game that my friends (Magic players) didn't play already didn't make a lot of sense.  So I ignored it.


Stories of a card game where actual games played by real people dictated the overarching story of the game.  Stories of a Tabletop RPG where players walked a thin line of personal honor and duty, where brave Lion and cunning Scorpions fought to save their clans, and their world.

It sounded like a lot of fun, and I always wished that I could have been a part of it.


Well, this weekend I got my chance, as Fantasy Flight Games released the new Legend of the Five Rings CCG, and I managed to attend a launch party for the game.  As an outsider, and a fan of movement mechanics and efficient play, I gravitated towards the purple Unicorns.  Armed with a starting set for the launch event (well 3 starter sets - buy 3 cores!) I used the Suggested Deck List to build my Unicorn Deck with Crab Splash.  My wife Sam took one of the other starters and built herself a Dragon Deck (with Crane Splash) and we got to gaming!

Lots of mistakes were made, but a ton of fun was had.  Sam managed to build herself a significant advantage with characters, having a monk that pretty much just hung around, but suffered in making an attack stick that would crack my provinces.  Meanwhile I was able to use my hand of special cards to eventually make the Cavalry Reserve overrun her 3rd province, and then sweep away her home base with my next attack.

Not much more than an impression of this game unfortunately, as we had been playing quite a bit wrong, following along with the Learn to Play as best we could to get the general feel of the game.  While Sam stopped to read the fiction at the end of the Learn to Play and plot how to turn her 1 Core Dragon into a 3 Core Dragon, I found myself playing someone different.

From what my opponent told me, he had gotten his first core set at GenCon and had been practicing, so I was about to get a much better lesson on the rules!  A strong battle was fought, as we danced around one another for several rounds, both slowly bleeding honor - he using his to Assassinate my characters, and using his stronghold to steal mine whenever I slightly pulled away.  Each of us broke a couple of key provinces.  Again, Cavalry Reserves let me turn the tide temporarily, and Captive Audience saved a province from certain doom, kicking several non-military characters out of a tense battle.  I was also able to use my stronghold's ability to play smart and safe, moving troops up only when necessary, and sending in already bowed characters to a lost fight, so he wouldn't be unopposed.

Finally, we both found ourselves looking at a big turn.  Each of us were sitting on about 10 fate, and our provinces flipped our two clan champions!  He was at 3 honor, and I was at 4.  Each of us had broken 2 provinces.  I put 2 fate on my champion.  It was time to fight!

We both brought out our champions, and he sent his (as First Player) at me with a Political Air attack on one of my unbroken provinces.  I blocked with a minor character, who was dispatched.  So I sent in my champion with my Stronghold, confident that I could use "I am Ready" to let her continue the fight, but he merely "Outmaneuvered" her and sent her home.  Unopposed, and with him already stealing honor, I found myself down to just 1 final honor.  But I would be able to win, if I could get both attacks off.  I attacked his province, cracking it, and held off on standing my champion, but I had screwed up.  He was then able to attack my remaining province, and I had no way left to move someone into the fight.  Unopposed conflict, -1 honor, for a loss for me.  He had nothing standing in my way if I could have figured out a way to oppose it.

What a great game!  Every decision was tense, and nothing seemed decided until the last possible moment.  The fate mechanic for characters was also a neat point to the game, with characters remaining as long as you paid up front to keep them around.  There is a lot of strategy to be mined in this game, and I'm excited to dive into it. 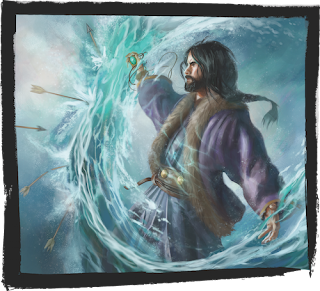