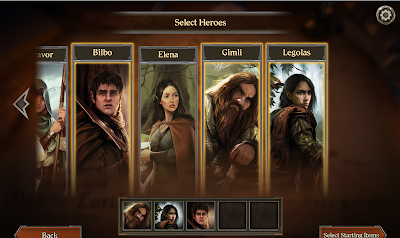 Our Fellowship is assembled.  Gimli and Legolas are fan favorites, to be sure, but Aragorn and Bilbo tied for third.  So, in turn, Truthiness was asked to cast the tiebreaker vote, and we're bringing Mr. Baggens along.  Let's look at them each in a bit more detail, then we'll worry about what to equip them with:

Of course, Gimli and Legolas joining up with Bilbo puts this firmly into the realm of NOT CANNON, so uh, we'll deal with that how we can.

Part II:  Down the Road Where It Began

Here's a better look into our pal Gimli's skills. 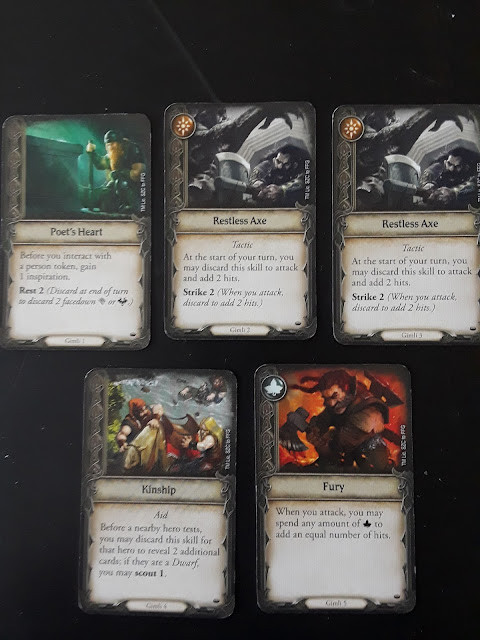 Poet's Heart is pretty good all-around.  Rest is a freebie to recover damage, and gaining inspiration to interact with a person token is just a bonus.  Restless Axe we're not as likely to see me pick up as a skill, it's better off sitting at the top of the deck being pulled as a success than "just" giving us Strike 2, but a free attack is a situational benefit we might make use of.  Kinship is really, really good for supporting other party members make critical checks, and we'll almost certainly grab that every time it flops.  Fury is just amazing, and we will definitely be hoping to grab that any time there's something worth fighting.

:  And well met to you, Dwarf.  A fine pair we will make, walking the woods together. 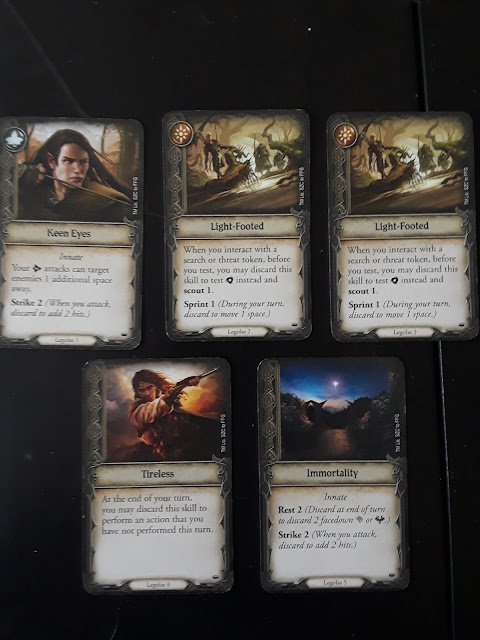 Keen Eyes is a pretty sweet grab if we can fish it up, assuming we go bow on Legolas.  Instead of attacking 1 space away, he can mow down enemies 2 spaces away.  Who needs a Dwarf with that reach?  Light-footed is our success card, and lets us cheat into Agility (and Scout 1) or Sprint.  Both very acceptable abilities, though we'll probably want them on top when we scout for guaranteed success.  Tireless is a quality card, giving us a free action, assuming we haven't done it yet, great when we need to clear an area of enemies, move, then interact with a token.  Finally, Immortality gives out Rest 2, which is very useful, or Strike 2 which is kinda useful.

:  I suppose I'm the link between the two of you.  Gimli, I fought with your father, and Legolas I fought both with and against yours.  I suppose another adventure is just what we all need.  But we still need a name. 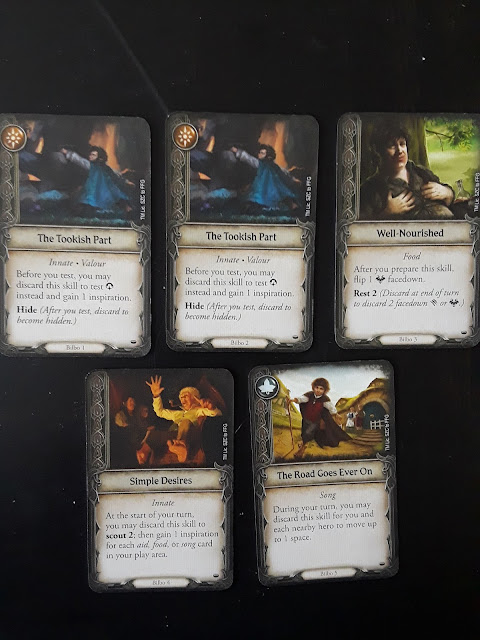 The Tookish Part is Bilbo's successes, but it also lets him cheat into Wit, or hide.  Bilbo is probably the least reliant on success results of the party, with a ready way of generating inspiration.  Well-Nourished is his Rest 2 card, and lets him flip down fear cards.  Not bad.  Simple Desires is a great inspiration generator, and a fair way to get an extra scout.  Finally, The Road Goes Ever On is s Sprint for your entire party. 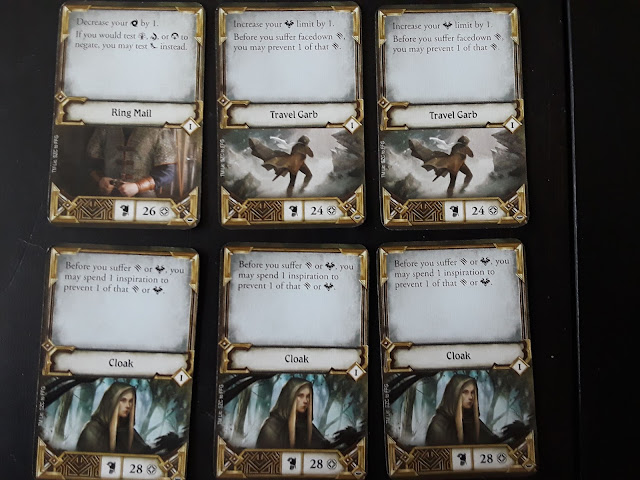 We've got 1 Ring Mail, 2 Travel Garb, and 3 Cloaks we can equip our party.  Ring Mail is basically made for Gimli, but that's not to say he wouldn't do well with Travel Garb - Fear is his biggest gap, and the hit to his already low Agility is rough.  Bilbo just wants a Cloak.  Legolas could do either a Cloak or Travel Garb. 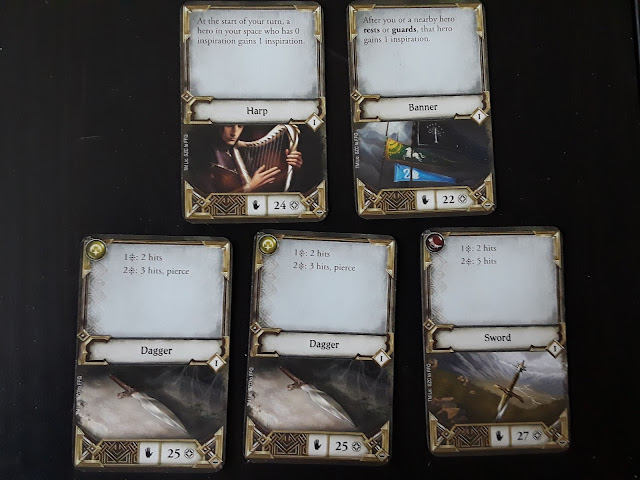 Bilbo sadly can only equip 1 [hand] worth of items, so we'll look at this first.  Of the items, the Dagger really is the only weapon that makes sense, and not arming him seems cruel.

Meanwhile Gimli could take the Sword and either the Harp or Banner, as the Sword is Strength based.  The Harp would help with his low, low Inspiration, and the Banner would do the same thing, but more so if someone takes the Guardian class.

There is an option for Legolas to equip double Daggers, but that would leave Bilbo without a weapon, and again that would be awfully cruel. 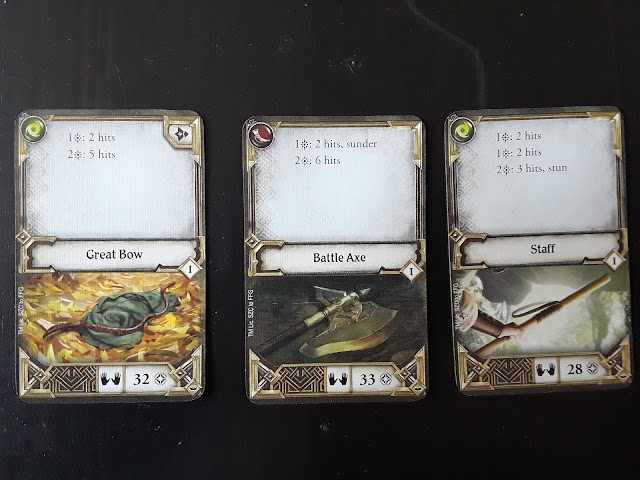 Two handed weapons give us a bit more options for Legolas and Gimli.  The Great Bow is Legolas' preferred weapon, while the Staff is the other option, giving a stun affect which is pretty good for attacking big nasty things without them hitting you back (though a bow could probably do it better).  Gimli would very much like to use his Battle Axe, which gives a total of 8 hits and Sunder, and turns him into a killing machine.

Finally, we need to set them out on their quest, and to do so we need a role for each character.  There are 6 potential roles in all, each good at something different: 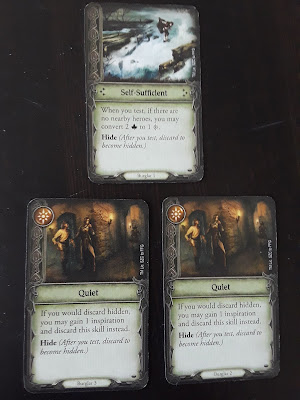 Burgling is all about hiding, and hiding is very good at avoiding physical damage, or popping out and doing more damage.  Basically you either avoid the physical parts of a hit, or add 1 to your successes.  Self Sufficient lets you convert inspiration results to success at 2:1, if you're by yourself, but you start with it and you start next to your buddies.  Meh.  Quiet lets you discard it to stay hidden, good for avoiding damage from multiple attacks or hitting something and avoiding its counter attack.  The upgraded stuff is all about hiding and sneaking and whatnot.  Bilbo has this as his "suggested role". 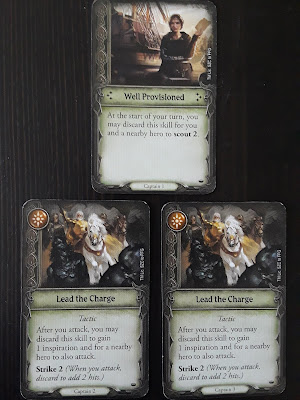 The best way to describe the Captain is "good at making everyone better".  You start with a card that lets you and another hero Scout 2, and that's a pretty good way to start an adventure.  Your two success cards are Lead the Charge, which let you gain an inspiration and give someone else an attack after you attack.  Bonus actions are good.  Future cards are either generalist or helpful to the party. 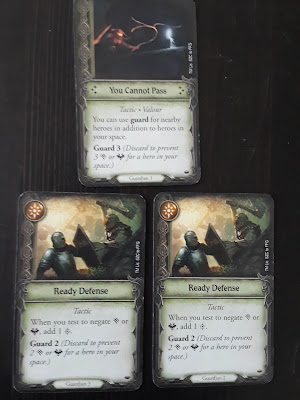 The Guardian is good at making sure you don't lose.  The starter card for it, You Cannot Pass, extends the guard ability to nearby heros, instead of just ones right on your space.  Good for a big brawl.  It also gives you a Guard 3 card right off the bat.  A pretty good starting card you're not going to want to shuffle back in early.  The success cards are pretty good as well, as Ready Defense lets you just add a success when you are testing to negate Damage or Fear.  You also have Guard 2 on each one.  Additional cards give you more Guard, or give you other ways to help keep your party members alive, especially in Last Stand (more on this later).  This is Gimli's "Suggested Role". 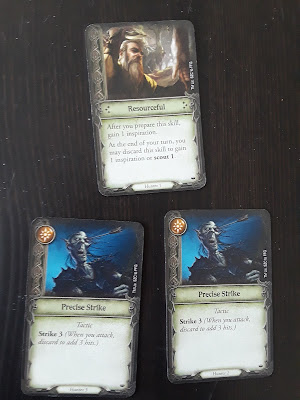 The if the Guardian is about defense, the Hunter is about damage.  It starts with Resourceful, which in turn starts them with 1 inspiration, and gives them to chance to either discard it for another inspiration or to Scout 1 at the end of their turn.  The Success cards are just a simple Strike 3, which is... not bad, but not amazing.  Future cards are mostly about dealing damage to things.  This is the "Suggested Role" for Legolas. 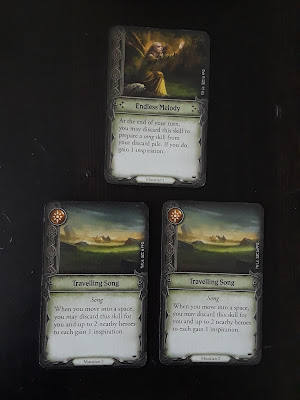 The Musician is another class that buffs your party.  Endless Melody isn't great as a starter card, but you can burn it to pull a song skill out of your discard pile and gain an inspiration.  That's pretty much just the Success cards unless we put it on Bilbo.  Speaking of the success cards, Traveling Song gives you and each nearby hero 1 inspiration, which is a pretty good buff.  Future cards are all about buffing and healing the party. 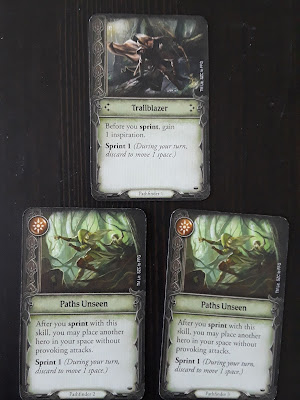 The Pathfinder is about one thing - Sprinting.  Sprint is a keyword that lets you discard a card to move "X" number of spaces without using up an action.  This is pretty darn good, and the Trailblazer you start with lets you gain an inspiration when you sprint.  Paths Unseen on the other hand is INSANE.  You can pick up another hero and place them in your space after you sprint with it.  This is really good and we're going to want a pathfinder for our exploration maps.  Future cards will sprint longer, sprint harder, or do other movement shenanigans.

These classes can be changed between adventures, but any experience earned during an adventure is earned towards that class.

Next Time on Journeys in Middle Earth 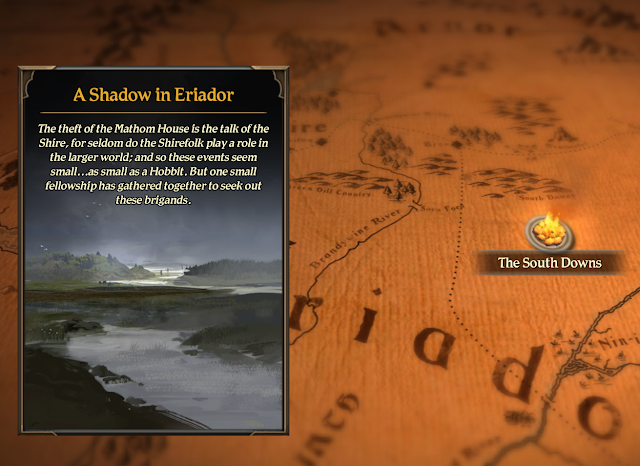 Our completed party moves on to explore the South Downs.

A Shadow in Eriador

The theft of the Mathom House is the talk of the Shire, for seldom to the Shirefolk play a role in the larger world; and so these events seem small... as small as a Hobbit.  But one small fellowship has gathered together to seek out these brigands. 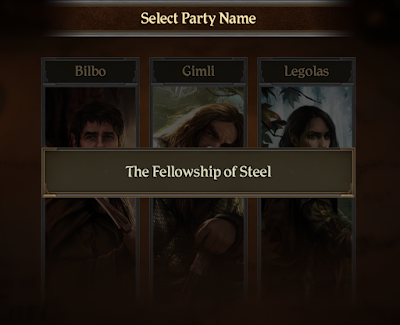