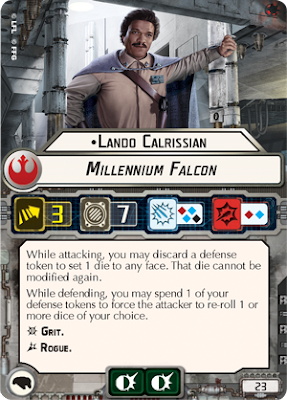 
While attacking, you may discard a defense token to set 1 die to any face. That die cannot be modified again.

While defending you may spend 1 of your defense tokens to force the attacker to reroll 1 or more dice of your choice.

It's wrong to compare either of the Ace YT-1300 squadrons to their generic counterpart.  The only thing that is the same is the hull.  A much better comparison is Lando vs Han, as both are flying the Falcon, and thus both can't be on the table at the same time in this way.  Also it should be noted that Lando is one of the best Rebel defensive officers, and you can't take him that way if you're running him as a squadron.

Lando's Falcon comes in with the same Speed 3 as Han, and the same double braces.  The same Grit / Rogue combo as well, for better positioning and non-ship activations.  3 points cheaper as well.

His attacks are a modest 2.25 average against squads and 1.00 average against ships, but that's not quite the whole story.  Well, you know how good Maarek Steele is, with the ability to fix a die when attacking?  Well, Lando can do that less often, but with quite a bit more of an oomph behind it.  As long as Lando has a defense token to spend, he can burn it to turn one of his dice to any face.  For both anti-squadron and anti-ship he comes with a Red die, so his floor suddenly becomes 2 damage (if you're willing to discard a token) and his ceiling is a whopping 5 and 3 respectively.

Now, the hard limit on using this ability is twice per game, unless you are playing Asteroid Tactics, where you can do it an awful lot and Lando turns into a monster.

Also you can use defense tokens to reroll attack dice against you which is pretty darn good especially against Blue dice.
Incoming Transmission From: Biggs at 08:00
Email ThisBlogThis!Share to TwitterShare to FacebookShare to Pinterest
Labels: Lando Calrissian, List Building, Rebellion in the Rim, Star Wars Armada