A lot to unpack with the one-two punch of the Starhawk preview article and the live stream of gameplay by FFG. 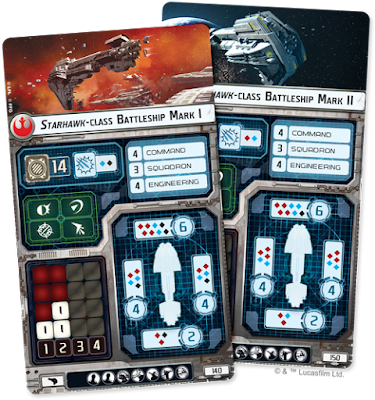 Those are some good looking ships.

Okay, so first the Starhawk is a pricey little bugger.  You're looking at the most expensive ship that the rebels ever had, and much more expensive than anything other than the SSD.  On one hand, it's got a LOT of oomph to it, specifically a very strong front arc and respectable side arcs.  Lots of shields too, and more than 50% more hull than the nearest other Rebel Large.

But no Defensive Retrofit and only 1 of each defense token means some small problems with the ship taking large hits from enemy ships.  That being said, the commander and upgrade cards included help mitigate this drawback. 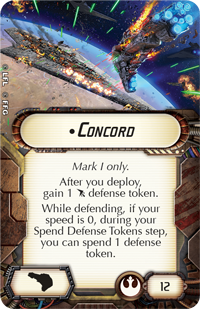 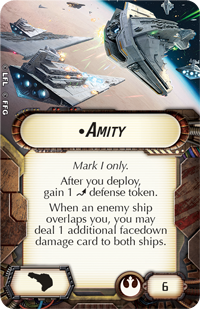 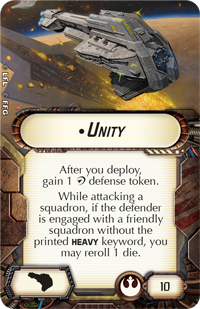 The three title cards all add a defense token, which is pretty good in and of itself.  Concord gives you the ability to spend a defense token while speed 0 as well, which while it will not cancel an accuracy block, does let you spend at least one token AND motivate your opponent to spend those accuracies rather than reroll them into damage.  Speed 0 in the past has typically been a bad idea that you technically could do, an unfortunate result of a faceup damage card, or a pro-gamer move to avoid getting shot, so it will be interesting to see if the upgrade card sees play and gives more options at no-speed.  The extra Salvo token is also a big bonus.  It feels like that ship is built to basically do this: 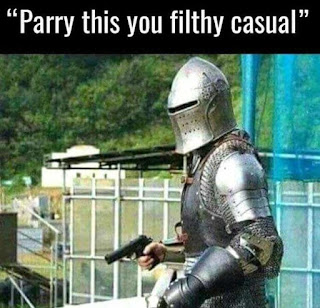 Amity has a feel of trying to do a bit of everything.  Evade is a really good token for Red range, and it is a shame it is limited to Mk I only, because the guns for the II fit it a bit better.  That being said, being able to park the big boy in front of something and speed up the ramming-to-death process is pretty good.  Not 100% onboard with this one.

I do like Unity though.  Redirects on a ship with 16 shields and 14 hull to chew through sounds pretty good to me.  Bonus to flak is also always good and appreciated, but requires you to bring your own squadrons which the ship isn't exactly the best base for.

So really, looking at these two as "oh I get to pay X for an extra defense token and also I get a little bit of utility". 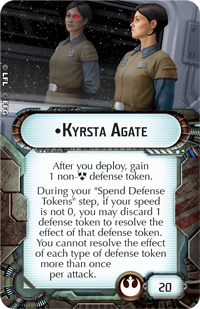 Remember how I'm always going on and on about how Dodonna's best feature is that he's cheap, and that one of the better reasons to look at Garm as your commander is that he's relatively cheap?

Give your flagship a free defense token (It's gonna be a Brace!) and discard a defense token to resolve it which is basically a poor man's Electronic Countermeasures, only it's your commander slot, not a defensive retrofit.  Not gonna lie, she's gonna be a force to be reckoned with.

Now not only does she give some seriously strong defensive capabilities to your biggest, nastiest ship, which the Starhawk definitely is, but you can pair her with everyone's favorite forgotten officer Walex Blissex to recover the burnt token.  Oh, and unlike ECM she doesn't exhaust, so you can go nuts if you need to so that you can keep rolling.

There's other fun ships I'd want to put her on just for the extra token and sorta-ECM.  MC80 Star / Battle Cruisers for one, who really want that ECM and hey now they've got 3 Braces or 2 Braces / 2 Redirects.  Or an MC75 with 2 Braces, and Early Warning Systems.  Did someone say Admonition with a Brace and 5 defense tokens to discard?

Looking at the officer version of her, I'm less sold.  A rare Red critical effect, and Blue for that matter, but I'm not sure how often you'll be using that special ability to refresh just the right defense token, although I suppose you could use it to refresh a Salvo token so that you can keep firing!

Wedge giving some non-uniques Cloak is kinda cool.  B-Wings obviously, but any generic squadron could get some love with this.  Heck, he can be used defensively to reposition Escort teams around Biggs, or Counter groups, or just free up your bombers.  He's cheap enough to find room on a list I think.  I like how he does it off of a token, and thus plays well with my main man Garm, and his mom-friend Ahsoka.

Shriv is Rebel Vader But Not As Good And Also More Expensive Somehow. 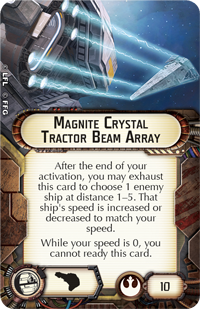 Okay, so Super Weapons.  You'll notice this one is both faction and ship specific.

So, first off the "surprise, you're speed 0" is a halfway decent trick, and I could see that seeing some play with the Concord title and a followup attacker.  Any other use feels like the Konstantine Problem: is the effect you get really worth the points?  Maybe it is, if it forces the opponent to plan around it?  But it's hard to have that "splash" that comes from a plan working perfectly.

If you're going to do the trick, what you want is Second Player.  The first ship to activate then gets Magnited by your Starhawk, and then pounced on by all the other ships you brought.  Probably the right idea is to go Starhawk and one other big nasty ship, like an MC-75 or MC-80 Liberty.  Drop 'em to Speed 0 and then whack 'em with 8 points of unbracable / unredirectable damage. 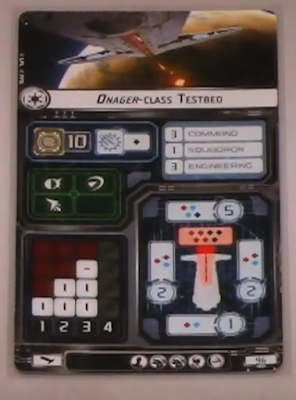 As someone who loves shouting "FROM DOWNTOWN" whenever I roll at long range, I'm going to enjoy the Onager just for that.  Oh, look, another Salvo defense token.

So, if you're not firing the Superlaser, I'm not really sure you're doing a lot of damage.  It's a not-quite as good Interdictor at that point, without a lot of shields aside from the front arc, and not great Engineering.  At least the "Front Towards Enemy" Imperial players should instinctively know how to fly the thing. 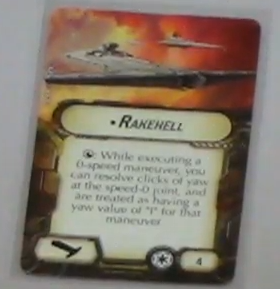 Speed 0?  Okay, so there might be a bit more of Speed 0 fun then, aside from the Starhawk.  Requires a nav command to use, but lets you turn at Speed 0, which is neat.  A dial should be enough to get two clicks ("I" yaw value plus dial bonus to yaw).  Turning in place will then let you fire the Superlaser which is another Super Weapon Upgrade... 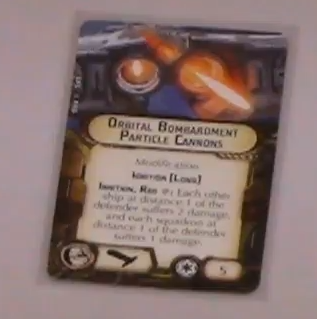 Oh, and another Red Critical effect.  Fire out the front and measure range based on the distance from the ignition token.  Also you place an ignition token after you move (your activation?) at the range specified, which is Long, then pick up the token after you fire.  This creates an area of denial, which is pretty good, but you're not going to be able to use it to reach across the entire map on turn 1, since you need a token to fire and you don't place it until the end of your activation.  And your opponent will be able to see where you're going to be dropping that shot, and make plans to evade it if they can.


I'm Super (Weapon) excited for both these ships and what they'll do to the meta.  I just might be an Agate main when the Starhawk drops, sorry Garm.
Incoming Transmission From: Biggs at 12:46
Email ThisBlogThis!Share to TwitterShare to FacebookShare to Pinterest
Labels: Kyrsta Agate, Onager-Class, preview, Star Wars Armada, Starhawk-Class Battleship, Wave 8