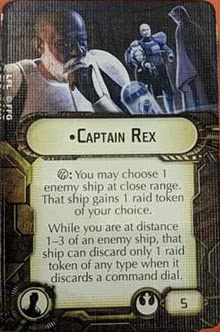 Let's talk about the new officers the rebels get in Rebellion in the Rim.  We're going to start with Captain Rex.

Squadron Command:  You may choose 1 enemy ship at close range.  That ship gains 1 raid token of your choice.

While at distance 1-3 of an enemy ship, that ship can discard only 1 raid token of any type when it discards a command dial.

Captain Rex is the Rebel's first reliable source of raid tokens, arriving at the same time as Kanan Jarrus, and with Jyn Erso being a bit... unreliable of a delivery vehicle and a single use.  On the other hand, Captain Rex and Jyn can run in the same list and combo off one another, but probably not on the same ship as she doesn't trigger off of the squadron command, but burns it a different way.

Rex does two things for you.  First, he makes it harder to get rid of raid tokens, making it so that your opponent can't just blow a dial to remove every token, though a truly dedicated Thrawn player can still get around him.

He also can deliver those raid tokens, specifically through squadron commands.  Note: he doesn't use the token / dial and get spent like a boarding team typically does.  His ability piggybacks off of a squadron command, and doesn't even cost you the activation of a squadron.  So if you have a carrier that wants to get up and into the fight, Captain Rex is your man.  Oh, and other things that affect squadron commands work with him too, it's just a shame there's no way to get two officers onto the same rebel ship... 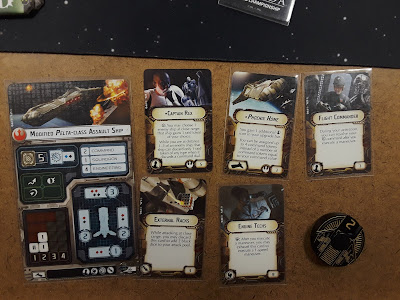 Oh, wait.  You can.  Flight Commander lets you pop a squadron command after you move.  Captain Rex triggers off of squadron commands.  Your Pelta is now an Electronic Warfare ship, moving an effective Speed 3 with Engine Techs and dropping a raid token on something when it stops.  Yes, you can last/first two raid tokens onto something.  You can all thank me later.

If you're not going to use Captain Rex for that, then you want something else that can drop Raid tokens onto something.  Kanan Jarrus or Jyn Erso are your only options for that with the Rebels, aside from the Surprise Attack objective (which is super fun and I recommend you take).  Another thought for Captain Rex is on a Liberty titled MC80, letting you get more bang for your squadron buck.  Or you can slap him on a smaller squadron pusher.

One more amusing thing would be to put him on a Raddus drop, or even on the Profundity drop from the Raddus drop.  Drop, lock off the worst command, and then do your attack.  Combine with Ion Cannon Batteries to ensure they don't have access to banked tokens.

There's a lot of potential for him for someone who can find the right way to make him annoying. 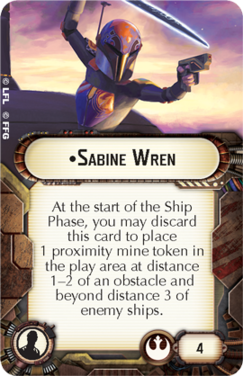 At the start of the Ship Phase, you may discard this card to place 1 proximity mine token in the play area at distance 1-2 of an obstacle and beyond distance 3 of enemy ships.

So the best use for this card is to force a bad choice.  Drop a mine in someone's way, and make them choose whether to:

1.  Shoot at the mine, giving up one of their shots to (maybe) blow it up.
2.  Avoid the mine, navigating in a sub-optimal way.
3.  Just eat the mine and take maybe 2 hull damage.

You also want to drop it in the way of a ship that has to activate before any of your ships might stumble into the mine, because do not forget that you can trigger your own mines.

I feel like Sabine has a lot of potential, but is going to require a lot of thinking to use properly which may limit the amount of time she sees on the table. 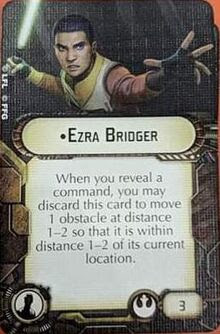 When you reveal a command, you may discard this card to move 1 obstacle at distance 1-2 so that it is within distance 1-2 of its current location.

Mid-game obstacle moving!  This is pretty darn good and gives the rebels access to something only the Imperial side had access which is obstacle moving shenanigans.  The "best" use for this card is obviously to take obstacle based objectives as second player, but you can also use it as first player to either deny another player's objectives use or just to do things like chuck an obstacle away from a Brunson ship.

I'm not sure Ezra is quite an auto-include but he's hard to leave in your binder between his versatility and being only 3 points.
Incoming Transmission From: Biggs at 18:58
Email ThisBlogThis!Share to TwitterShare to FacebookShare to Pinterest
Labels: List Building, Officer Upgrades, Rebellion in the Rim, Rebels, Star Wars Armada