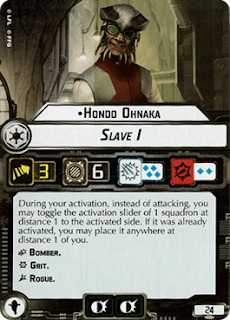 It's friend to all, Hondo, back as an... Imperial?

Hondo is flying Slave I, something I don't quite remember him doing but apparently he did, seizing it while a young Boba Fett was in prison.  Cool.

It's armed pretty much the same as a Boba's Slave I, but with a Blue instead of a Black anti-ship die.  Price-wise Hondo comes in a little bit cheaper, with 24 points, and he does have Grit in addition to the Rogue and Bomber keywords.  What makes Hondo special is his ability:

This is quite a bit of control over the squadron game.  Note that it says "instead of attacking", so you will still get your movement, and can use this ability either before or after your movement.  This lets you do creative things, like throwing a squadron onto a rock so that you aren't engaged anymore, or pulling an enemy out of an Escort ball to be focused down.  At the very least, you can use his ability to block out the most annoying enemy squadron if it has not activated yet, saving you quite a bit of damage.

All of this is very good, but lacks the splash of major damage dealers.  It also means that he needs other squadrons around to be utilized efficiently, though with 4 Blue anti-squadron and 2 Blue Bomber anti-ship he's not useless regardless of what the enemy fleet looks like.

Of his two big drawbacks, not being able to take Boba Fett in the Slave I isn't much of an issue.  Losing out on Officer Hondo though is more of a problem, as he's become a staple for tokens in fleets that need them.

Look for him in an Imperial squadron compliment that is going for a balanced approach, which can bomb ships or fight squadrons as the need arises.
Incoming Transmission From: Biggs at 11:28
Email ThisBlogThis!Share to TwitterShare to FacebookShare to Pinterest
Labels: Commander's Guide, Firespray-31, Hondo Ohnaka - Friend To All, List Building, Slave 1, Star Wars Armada