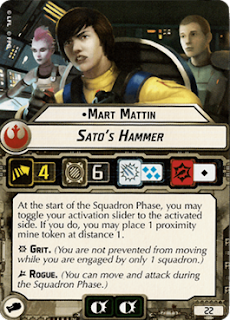 Matt Martin is an interesting squadron, in that he can do some serious damage to enemy ships that don't take him seriously, and bypasses normal squadron rules.  Let's look at him now:

Marth showed up in Star Wars Rebels as Sato's nephew(?) I think.  Anyways, I forgot when he was announced even who he was because he didn't have the Sato name so I figured he was the other guy.  You know, the guy in the right side of the picture.

Cheaper than Dash Rendar, he's not quite as good at shooting squadrons, since he gets no reroll.  What puts him above a generic YT-2400 is not only the Grit keyword and defense tokens, but also his ability to damage enemy ships.  If you get him into a good position, you can toggle his activation slider at the very start of the squadron phase to drop a proximity mine, which averages 1.5 damage straight to hull if it goes off.

It is delivered via a proxy mine token, which gives your opponent the chance to shoot it instead of taking the damage... unless they have other targets they need to shoot.  Or the shot is obstructed and they only have 1 die.  Or they miss.

This means that Marrek Matthews is probably best as a Second Player squadron.  After all, your own ship can accidentally trigger the proximity mine, so you want to be dropping it on ships that need to activate early, so they are the ones that trigger it.  He combos best with other means of moving squadrons.  The newly announced Wedge Antilles (officer) seems like a good partnership, giving him the ability to reposition after the squadron phase is over.  Wedge is for generics only, and that isn't cool.  Actually good are Fighter Coordination Teams or more expensively Adar Tallon to get him into position for the drop.

Between his desire to be near a target, a robust 6 hull with braces, and the ability to drop mines on ships while engaged with enemy fighters, he's a good squadron to pair with Uncle Sato.  Overall a pretty good squadron to consider using.

Even if his name is dumb.
Incoming Transmission From: Biggs at 10:59
Email ThisBlogThis!Share to TwitterShare to FacebookShare to Pinterest
Labels: Commander's Guide, List Building, Mart Mattin, Rebellion in the Rim, Star Wars Armada, YT-2400