Continuing our articles previewing the Quarter-Final round of the Armada World Cup, we are onto the other matchup in the first bracket:  JJs Juggernaut, and Quadro28. 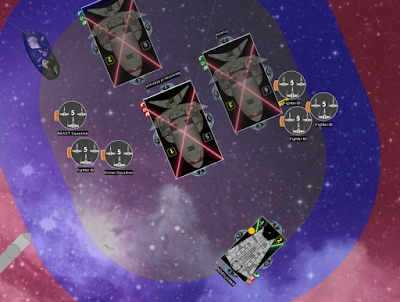 JJs Juggernaut often lives up to his name.  His forums signature should tell you everything you need to know about his success at Armada:

This tournament has so far been no different.  JJs dominated the early games, collecting the 3rd most points of anyone during the POD rounds, with 28 total Tournament Points, and the 3rd highest MOV with 1005.  His match in the first round of elimination against NebulonB was another dominating win, 400-64.

Quadro28 had another weird path to the elimination rounds.  He initially had no luck getting a game scheduled, having one player no-show to a game (giving him an 8 point no-show win) and another player's schedule just fall through the cracks.  Then a freak error crippled the initial match against Madaghmire, forcing a late reschedule.  He was able to win that matchup though, in a 7-3 decision, which was just enough to take his pod.  He proved that he wasn't just a flash in the pan against his elimination opponent, Zanos, using his squadrons to good effect and outmaneuvering his opponent's slower VSDs, forcing a concession in the 5th turn.

Of the two, JJs has the initiative bid with 389 to 394, and also has activation advantage 4-3.  Quadro has deployment advantage though, 8-6 with more squadrons than JJs could field (10-5).  Both have a different approach to the fight - JJs picking Turbolaser Reroute, and being more comfortable bringing his Admonition into a brawl, while Quadro is set up to play keep-away with his AFIIs, and punch hard against anyone closing in with Yavaris.

JJs definately has a better ship vs ship matchup in this case, but the wildcard is the squadrons.  Yavaris, if left to its own devices, can end a CR90 or Admonition with a double Scurrg activation - assuming they can get into position to attack.  Gallant Haven gives JJs flagship a more potent fighter screen, though does little to protect the CR90s and MC30c.

As far as squadrons actually go, both have about the same in terms of Anti-Squadron dice to throw.  The big difference with Quadro is that he has some non-X-Wing Bombers in the mix as well.  In the end, it'll be a game of positions and activations, and what is being screened from who.

It is very hard to bet against JJs.  I did in my prediction in the first round of elimination, saying that his opponent had a better matchup against him, and that any mistake would spell his doom.

He won by a resounding margin.

This is not as bad of a matchup for JJs, and he's on fire so far this tournament.  I expect him to continue with a win.  Quadro can take him if he has excellent squadron play and spot on navigation, but I still think JJs eventually finds himself on top.
Incoming Transmission From: Biggs at 07:00
Email ThisBlogThis!Share to TwitterShare to FacebookShare to Pinterest
Labels: Armada, Strategy, Tactics, Vassal