Here is a writeup that is way overdue.  Back in the end of May, I went to the second and final Store Championship I would be reasonably able to go to.  Martinsburg, WV is about 4 hours from home (Pittsburgh), and me, "Howlrunner", Chris, and his Fiancé decided to make a 2 day vacation of it.  Chris and I (and Dan, who was traveling separately) would be playing in the tournament the first day, an then we would all head down to Washington DC the next day.

Here is how I got runner up - I cannot remember the specifics of the games that I played now, so tactical discussions might be a bit light. 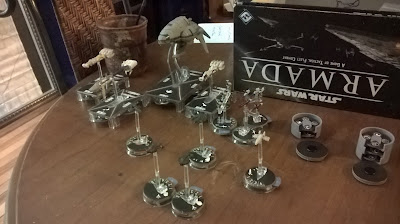 I decided to try something a little different from my usual A-Wing screen / Big Boy covered by CR90s / Rieekan list that I had success with in Pittsburgh, so I went with something fairly different.

The key player in this list was the AFIIB - I had it geared for 5 squadron activations, plus anti-squadron boosting with Flight Controllers.  The idea being that the B-Wings could turn either into an alpha strike on enemy fighters, or just go hog wild on bombing runs with dual intel HWKs.  Jan would work to keep the YT-1300 alive (my only escort, playing a bit fast and loose there), and two YT-2400s would be able to work independent of any activations.

TRC spam was the other key to the list - my best and only way to take out enemy whales would be to just do a lot of damage to the in small needly chuncks.  I think if I did it over, I would have put Dodonna on the carrier - it only was destroyed once, and it would give me another CR90 that I could throw away if needed.  Salvation was another questionable add - I am not sure I got enough out of it with this list to justify its inclusion - another CR90A would have been better and cheaper.

For activation and deployment advantage, it covered every base that I wanted it too.  4 Activations and a whopping 8 deployment meant that I would be able to dictate quite a bit of each engagement.

Objectives were a simple decision:  Most Wanted goes well with any list that brings a low cost ship you aren't particularly interested in engaging with.  Contested Outpost is an excellent B-Wing objective - come to the B-Wings or lose 20 points a turn.  And Superior Positions let me capitalize on my slow B-Wings and escorts, and still pick up points for rear arc shots - plus no Rieekan to screw it up with zombie ships handing my opponents tokens.

My opponent for the first round had the following list:

And other upgrades which I forget.  I think Ordinance Experts and APTs on the MC30s.  He had initiative and chose First Player, and I selected his Most Wanted objective (I think Opening Salvo might have been a better one for him here).  He chose Admonition as his objective ship, and selected my carrier.

His forces and mine crashed into one another in the middle of the board, with my B-Wings dropping Yavaris before it could really double tap anything.  But his Admonition and Foresight did their work, dropping my Salvation, and one of the CR90s.  While I did manage to take out Admonition, it was a trade for my Carrier.  In the end, I barely managed to bag Salvation with the YT-2400s as Firesight limped away and my flagship flew off into the sunset.  Final score:  6-4 win for me.


With the first round over, I found myself on the 9th or so table - a good number of players had taken their store championship byes, as this was the only tournament they would be able to attend.  My opponent for this round was the eventual #2 player at US Nationals, Troy.  I had met him already through another Philadelphia player that had attended the Pittsburgh regional.

Rhymer
Firespray x3
IG88
Dengar
17
I think this is right, it may have been 3 Raiders and a more kitted out ISD.  I have first player, and chose Player 1, as I had deployment advantage and was hoping to use my carrier as an alpha strike on his Rhymerball.  Only Dengar had intel after all, and if I could blow him up, the rest of the squadrons were dead in the water.  I selected Most Wanted from his list - he chose a raider, and Salvation - hoping for easy points.

Our ships went down with his Raiders clustered to the right flank, the ISD on the left, and the fighter ball in the middle.  I put my ships to crush through the Raiders, with Salvation far off to the side of the ISD (possibly why he chose Salvation).  Long story short, B-Wings cut through Raiders like a hot knife through butter, especially when supported by TRCs.  IG-88 and Dengar came in to harass my fighters, while the Firesprays and Rhymer moved off to attack Salvation.  Dengar dropped FAST, and IG followed quickly thereafter.  At that point I just fed YT-2400s and my YT-1300 to the ball to keep them pinned in place, as my B-Wings did work.  I lost Salvation, but he lost everything.  9-1 victory.


A 9 point win an 15 tournament points was enough to bring me up to table 2.  First and Second at this point were Paul Heaver (of X-Wing Fame) and Q (Of GenCon Special Fame) with 17 and 16 points.  I tied with 2 other players and was matched up with the first - his list was:

He had initiative and wanted Player 1, choosing Most Wanted.  I chose the nearest deployed VSD as the most wanted ship, and Dodonna's flag as mine.

I can't remember terribly much from this fight, only that my deployment was such that I was only engaging one VSD at a time, and dropped them one at a time.  I was concerned with the squadron matchup, but the lack of intel meant that I was able to focus down Howlrunner fast, and splash Interceptors with my own activations.  The TIE Bombers were a non-factor, tied up by my own squadrons.

I lost... something, but tabled him, winning 9 - 1 and securing a spot in the top table.  Turns out the folks already on the top table had a 5-5 more or less draw, knocking them down to 22 and 21 points.

My opponent was the other guy that had tied with 15 points earlier.  Oddly enough, due to a mistake in scoring we were originally scheduled to play Round 3, but he was moved to a different table when my other opponent had his score corrected.  I believe he had 23 points to my 24.  We both knew we needed a solid win to be in the final - down to table 5 were folks that could top us with a 10 point win if we 5-5 drew.

Another matchup I wasn't looking forward too.  He had a lot of the same squadrons that I did.  I chose first player, as I had initiative, and went with Precision Strikes.  Points heavy, one of us was going to win big here.

I don't recall much of this match, but I know we crashed in the middle.  Wedge and the YT-1300 were bounced by my alpha strike, and Jan quickly followed.  In the end, I think I lost a few squadrons, but destroyed his entire fleet.  Precision Strike tokens were low - we both had opportunities to flip cards for tokens, but seemed to pass on it in favor of just eliminating the enemy ships outright.  In the end tokens were 3 - 1 in my favor, but his list was destroyed.  10 point win in my favor.

Did I mention Top Table had the world's worst playmat?

Truthiness would be my final opponent, coming out of nowhere having lost his first match 2-8, and clawing his way up from the bottom tables with three 9-1 victories in a row.  I want to say he had 29 points at the end, sneaking in from one of the down-list tables with a 10-0 victory.

You can read his take on the final game here.  Suffice it to say, he wrote it while it was still fresh.  What I do remember is that I really needed to save Dodonna by sneaking him past the Independence, and failed miserably, and I really lost the squadron fight.  I think I took out Wedge and the YT-1300, and maybe Dutch?

It was great to play against him - we actually met in real life for the first time between Round 2 and Round 3.  An excellent opponent and a good guy.  Congratulations to him for winning the Regional, and I hope that he changes his mind and shows up to Worlds.
Incoming Transmission From: Biggs at 15:45
Email ThisBlogThis!Share to TwitterShare to FacebookShare to Pinterest
Labels: After Action Report, Armada, General Dodonna