The Empire gets the best toys, don't they?  Today we're going to be talking about the Wave 4 ship known as the Interdictor, and what role you can find for it within your fleet.


The Interdictor marks only the second medium base Imperial ship, and the third medium base ship of either faction.  It is also the most expensive medium base ship, clocking in at 90 points at the minimum, even more expensive than a Victory II-Class.  Command Value is, however, very low for a medium ship, clocking in at the more expected "premium" small ship value of 2.  Squadron Value is also lower, at 2.  Notably, the Interdictor has a high Engineering Value at 5, giving it the ability to repair hull damage naturally with a token, or recover 4 shields with a dial / token.

For defense, the Interdictor boasts 3 front shields, and 2 on both sides and rear.  In addition to this, it has 9 hull (with 2 extra potential from Motti).  For tokens, it has a Brace, Redirect, and 2 Contains, making it very difficult to land a default critical result.

The ship suffers in maneuverability, though not as much as the Victory Class.  It also has a top speed value of 2, but gains 1 yaw at each click of the tool, making it slightly better at repositioning without the need for navigate commands.  Also unlike the Victory, it does have the ability to take Engine Techs with a Support Team slot.

Speaking of upgrades, the ship is capable of not only taking the Interdictor title, but also an Officer, Support Team, Offensive Retrofit, Experimental Retrofit, and Ion Cannon. 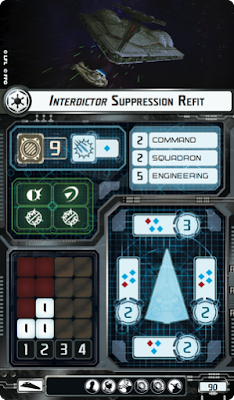 The Suppression Retrofit comes as the cheaper of the two at 90 points.  As a benefit over its counterpart, it has the ability to take 2 Experimental Retrofits instead of just one.  For offense, it has 1 Red / 3 Blue dice from the front and sides, and 1 Red / 2 Blue dice from the rear, plus a single Blue for anti-squadron. 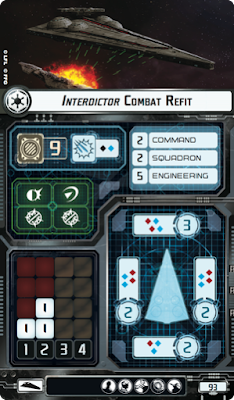 The Combat Retrofit is only slightly more expensive at 93 points.  Unlike the Suppression Retrofit, it has 2 Red / 2 Blue on the front and sides, and 1 Blue / 1 Black for anti-squadron.  It also only has a single Experimental Retrofit.  Other than those things, there are no other differences between the two.  Expect to see this one used when only one Experimental Retrofit is wanted or needed.


Commanders:   With 5 natural Engineering Value and 9 hull, the ship is almost certainly in consideration for the flagship of a fleet, though it is slow and doesn't have a Defensive Retrofit slot.

Tarkin gets limited mileage out of these ships, with their low command and high cost / ship.  Motti wishes they were a Large base ship, but is happy to give them 2 hull, and make them even more unkillable.  Screed can feed criticals to their Ion Cannon upgrade - which may or may not be worthwhile.  Ozzel... isn't very useful except to go from stalled out to full speed in a single turn.  Vader has a good option in the redundant Contain, but suffers from not a large pool of dice to roll - he would rather have the Combat Retrofit than the Suppression.

Of the new commanders, Tagge can bring back a Brace or Redirect that was lost to an early attack - this may be crucial for keeping this repair heavy ship flying.  Admiral Konstantine or "Special K" though loves medium base ships, and his ability to slow down or speed up your opponents pairs well with this ship's utility role.  More on that later though.

Admiral Titus is a new option for messing with your opponents speed prior to the first round starting - a definite option that pairs well with the utility role of the ship.  Wulff is an option for keeping the ship flying - an early engineering command gives you 3 points a turn for repairs, or 8 with a matching dial.  4 shields or 2 hull / 1 shield a turn is a lot of extra damage to chew through for anyone.  Also on a defensive note, Needa can make use of one of the two Contain tokens.

The command altering / updating generic offers are an option, but at 2 command may not be the most useful except with certain commanders or combinations.  Intel Officer is probably a waste as well on a less heavy hitter.

For support teams, Engine Techs is the obvious answer, or would be for a maneuverable, nimble Medium ship.  However, with 5 engineering, it is a prime candidate for projection experts - repair one of your own shields after tossing 2 to an opponent.  With a token you can even recover more than you toss out - making it possible to move shields around while under fire.  On a similar note, Engineering Team or Nav Team could be options to either improve your 5 engineering to 6 - 2 hull or 3 shields is a sweet spot - or give you extra yaw with a token to line up double arc shots.

The offensive retrofit slot seems destined to be either a tractor beam or nothing, as this synergizes well with the role of the ship.  Boosted Comms could work though there are plenty of ships better suited to a carrier role - though keeping the ship back and still contributing squadron activations at a distance is a viable option for the ship.

Experimental Retrofits will need to be covered in greater depth in a later article, but it seems fair to theorize that the reason you are taking an Interdictor is to bring one (or more) of these into the fight.

Ion Cannons seem to be this ship's one nod to offensive firepower, and with the Suppression Refit boasting 3 Blue and the Combat 2 Blue the ship is equipped to utilize them.  Leading Shots feels like a waste, without a lot of dice that need rerolling.  High-Capacity Ion Turbines likewise seem pointless as the side arc isn't the dominant feature of the ship.  The other five though could find their place on an Interdictor, particularly the Suppression.

SW-7s in particular do good work with a Suppression Refit.  Without a Concentrate Fire command, you are looking at 3 damage per arc.  However, if you want to hunt for a critical effect, all the others are quite good as well.  Overload Pulse lets you lead off with the Interdictor which should be a lot sturdier than a Raider II-Class for delivering a setup for an Avenger attack.  NK-7s are also a good setup shot for the rest of your fleet to follow behind, if a tad pricey.  A good option for a pesky Admonition though.  More interesting is the much forgotten Ion Cannon Batteries.  Being able to strip a command token or a shield from the enemy hull zone holds a unique synergy with tractor beams and the other control options this expansion offers.  MS-1 Ion Cannons do much the same, but with nearly ubiquitous rebel whale cards like Electronic Countermeasures, or an Engine Tech.  Even Adar Tallon is affected.

Centerpiece - While not an ISD, the Interdictor is a point heavy ship that is also very hard to kill.  Using it as a flagship is certainly in the realm of possibility.  Support it with Gladiators, Raiders, and Gozantis and it could find its way into a flagship role on a Demolisher or Fireball style list.

Support - Perhaps a bit expensive for a pure support role, the ship does have enough hull and guns to be an active support.  It does still outgun an Assault Frigate at medium range, after all.  With Projection Experts it can share shields, and with Targeting Scrambler you can take the biggest sting out of a major close quarters shot.

Control - Tractor Beams, Grav Shifts, Grav Wells, and G-8 Projectors all let you have incredible control over conditions of the battlefield.  How many games have you seen where players lose the game in deployment?  Give yourself the opportunity to make it harder for your opponent to play well.  Give them a chance to force mistakes.

Ion Cannon Battery - Name a ship that can get 3 Blue dice more reliably on an enemy ship and not blow up if you look at it funny.  You would normally need Rieekan or a Vic II to pull off Ion Cannon shenanigans.  There are a lot of fairly nasty critical effects you can make use of.


Well, that is all I have for the Interdictor.  What do you think?  Any roles I am missing for this new ship?  How will you be using the new Experimental Retrofits?  Leave a comment below!
Incoming Transmission From: Biggs at 23:46
Email ThisBlogThis!Share to TwitterShare to FacebookShare to Pinterest
Labels: Armada, Imperials, Interdictor, Interdictor Combat, Interdictor Suppression, Wave 4