We are going to talk about the Interdictor specific upgrades today - these things do a lot to change the game, messing with deployment, adding defensive support to your fleet, and just mucking about with the speed at which your opponent can move. 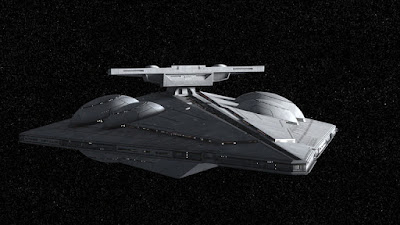 ﻿
G7-X Grav Well Projector - 2 points - Before deploying fleets, place 1 grav well token anywhere in the play area.  When a ship deploys at distance 1-3 of a grav well token, its speed must be set to 0.

When someone says "Interdictor" this is what I think.  Messing with your opponent's deployment in such a way that you gain the advantage.  From the very beginnings of Interdictors being used in the Expanded Universe (now Legends) books, this was what they did.  They pulled ships out of hyperspace and kept them from fleeing.  This upgrade is no different.  It dictates where your opponent can deploy their ships by limiting the speed of any ships deployed in a specific location.

A few things to consider with this - it goes down "before deploying fleets" so it pairs best with objectives that you know the location of.  Contested Outpost, Fire Lanes, Fleet Ambush and Hyperspace Assault (First Player Only) are all good options, and take up all the defensive objectives.  Hyperspace Assault in particular is interesting, as the grav well tokens can be used to neutralize potential hyperspace points for the enemy fleet - note that the tokens are not picked up after initial deployment.  For Navigation - Minefields, Dangerous Territory, and Intel Sweep are all fair options as well.  For First Player again, Superior Positions can use this as a way of denying a flank to the enemy.

And for only 2 points, it seems like a very easy upgrade to justify on any Interdictor that has room for it.  That being said, it isn't the only upgrade in contention for these slots.


G-8 Experimental Projectors - 8 points - Unique - Before an enemy ship at distance 1-5 resolves the Determine Course step, you may exhaust this card to temporarily reduce its speed by 1 to a minimum speed 0 until the end of the maneuver.

An important note - because the movement resolves when the movement template is inserted into the ship's guides, you need to declare that you are utilizing this prior to that happening - if only to prevent an illegal move from being performed.

This is also one of the cards that can be refreshed with the Interdictor title, so it is possible to slow 2 ships in a single turn.

It is a card that pairs well with Tractor Beams, Admiral Konstantine, and the like for pinning your opponent's ships more or less in place.  Though it can be prevented by a navigate command being spent (or held in reserve if the projector is not used) it does lower the maximum speed a ship can travel, and more importantly it forces your opponent to utilize nothing but navigate commands if they want to out maneuver your ships - those are commands they could be spending on squadrons or engineering.

While temporary it does work on your opponents turn, can't be blocked by banking a token, and it has no size restrictions, so your Interdictor can slow an aggressive ISD or MC80 in its tracks if it needs to.


Grav Shift Reroute - 2 points - Unique - Before deploying fleets, place 1 grav shift token anywhere in the play area  After deploying fleets, you may move each obstacle at distance 1-3 of that token to within distance 2 of that obstacle's current location.  Obstacles cannot overlap tokens, obstacles, or ships.

But they can overlap squadrons!

This is another card that can mess with deployment quite a bit.  How much are you going to want to deploy near the asteroid cloud when you know your opponent can set it up after your deployment however he wants.  Rocks in just the right places.

The biggest objectives that can be affected by this are Contested Outpost (move it closer to your side, or at least away from your opponent), Fire Lanes (obstruct shots on the tokens with moved obstacles), and Dangerous Territory (move yours closer, or your opponents away).  I would expect more to come with Corellian Conflict coming out soon.


Targeting Scrambler - 5 points - While a friendly ship at distance 1-3 is defending at close range, during the Spend Defense Tokens step, you may exhaust this card to force the attacker to reroll up to 4 dice of your choice.

It may very well be the best card of the pack, especially if you are playing an aggressive, in your face, list, or playing against someone that has back dice and critical effects.  Considering when you use it (after the attacker has finished modifying their dice) and what you can use it on (all the double damage cards / critical effects) it can be a lifesaver against a Gladiator or MC30 that has pulled up to cause trouble.  Because it is an exhaust effect, you can use it against two attacks in a single turn with Interdictor title, or against a Triple-tapping Demolisher.  You can even use it against TRC'd Red dice if they have gotten in to close range.

This is a very potent effect for your ships, and if you have the desire to run two Interdictors, you can run two of them as it isn't even unique!  Though one may argue that many Interdictors isn't the most effective use of your points.


Well that is it for Experimental Upgrades.  We will be talking Ion Cannons an Turbolasers still to close out our new coverage of Wave 4.  Keep your eyes open for them!

Also, don't forget to like us on Facebook!  What better way to get all your articles the moment they come out then to see it in your Facebook feed?  Click here to give us your likes!
Incoming Transmission From: Biggs at 10:30
Email ThisBlogThis!Share to TwitterShare to FacebookShare to Pinterest
Labels: Armada, Experimental Retrofits, Imperials, Interdictor, List Building