Today we are going to look at the new officer cards from wave 4.  You may recall we already looked at the ones from Wave 3.  Let's take a look at what the newest wave has brought us this time! 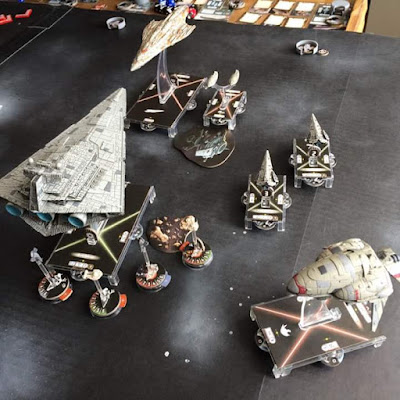 
Haha just kidding there aren't any!


Admiral Titus - 2 points - At the start of the first round, you may change 1 enemy ship's speed by 1.

I like this card.  To me, it reads "your opponent does not bank a command token for one ship on the first round".  For 2 points, that seems like a fair investment.  He can go on just about anyone that doesn't otherwise demand a specific officer.  Don't expect him to do anything too spectacular though, he is just there to slightly inconvenience a single ship.


Commandant Aresko - 7 points - When another friendly ship at distance 1-3 reveals a command, you may exhaust this card to gain 1 command token of the same type.

As FFG pointed out, he costs the same as Wulff Yularen, for a similar benefit (one free token / turn).  That isn't quite the whole story though.  You can refresh him with the Interdictor title to get two tokens a turn, and do shenanigans like Navigate (Aresko Token), Interdictor Engineering Command (bank token) -> spend Navigate token to Engine Tech, 3rd ship activates -> Interdictor Title Card -> Navigate (Aresko Token).  He also gives you the option of greater variety of tokens than old Wulff, but at the cost of certainty that you will always have that Navigate token saved.

I like him on a bigger ship that can make the best use of the token - either saving it future turns, or getting the most bang for your token buck.  Either the ISD, VSD, or Interdictor could find him a home, though he will need another ship doing the same thing to feed the tokens.  Maybe a Repair Team Gozanti feeding an Engineering token to the VSD it is fixing up, or a carrier ISD picking up a Squadron token one turn, and then a Navigate the next to put itself back into position.


Chart Officer - 2 points - After you execute a maneuver, if you overlapped an obstacle, you may discard this card instead of resolving the effects of overlapping that obstacle.

Every ship can be a poor man's Jaina's Light.  For 2 points, it opens up some navigational options that you may not have otherwise had.  While it does only work once and doesn't do anything to prevent obstructions, it could easily find a home on something big (and prone to rocking itself by accident) or something small and fast that wants to crash through a rock to turn up a flank.

I had an opponent surprise me with this card on a CR90B, who crashed through a large asteroid wall I had created, to double arc me.  Instead of  being out of position, or almost dead (with a Dodonna crit) he was instead very much alive and in very good position.


Flight Commander - 3 points - During your activation, you can resolve your Squadron command after you execute a maneuver.

An amazing upgrade for a Flotilla that wants to fling its squadrons forward and creep in to the fight.  Or for that matter for any fleet that wants its squadrons forward of themselves, but doesn't want to waste their offensive retrofit on Boosted Comms (or doesn't have one at all).  Yavaris would also get a lot of love from this guy, if he didn't compete for a spot with other officers like Raymus Antilles or Veteran Captain.

As for what squadrons to push with it, I would look at using it if you are bringing the faster ones that can leap ahead of the pack..  A-Wings, TIE Interceptors, Corruptor boosted TIE Bombers or really anything speed 4-5 are all squadrons that want to fly far into the distance often out of range of your squadron commands for the next turn when they pop off their initial attacks.  Hell, even a speed 3 squadron enjoys this upgrade if its carrier is creeping forward at speed 1.

EDIT:  An additional point that I did not cover when this was first published was with the key importance of switching the order things are done around.   This lets you do things like strip shields with the ship, before activating - for example - Keyan Farlander and getting his rerolls.  Or firing AA at enemy squadrons, and picking off the ones that you actually weaken (or know you can safely ignore the 1 HP guy, because he is now very dead).


Skilled First Officer - 1 point - Before you reveal a command, you may discard this card to discard your top command dial.

Slicer Tools proof your ship is the first thing that comes to mind, but really the Skilled First Officer is the Support Officer on the cheap - you don't quite reset everything, but he does have better timing, and much better cost.  For just a single point, he is pretty good insurance against a timing mistake in your commands, especially something coming up a turn too quick.

I think it works best on 2 Command Value ships if you are taking him to cover for mistakes.  If he is Slicer Tool insurance, than anything bigger than a 1 Command Value is good.  And for just 1 point cost, I like him a lot more than the 6 point command specific officers and the 3 point Liaisons for keeping your dial on the correct command.


That is it for the officers.  We will be talking about Weapon Teams next.  See you then!
Incoming Transmission From: Biggs at 17:45
Email ThisBlogThis!Share to TwitterShare to FacebookShare to Pinterest
Labels: Armada, List Building, Officer Upgrades, Wave 4