Why did I do this to myself?  Why did I tell myself that this would be a good idea.  It isn't.  It was a horrible plan.  I could have made something janky that could still have worked, but I didn't.  Instead I put 2 Interdictors in a list together. 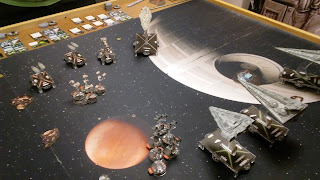 I won the bid and chose Second Player.  I set up the stations, and put out the "Speed 0" tokens across the other side of the board to force anything deploying directly across from the stations to start at Speed 0.  The approach was good, I had the MC80 dead to rights...  Then everything went bad. 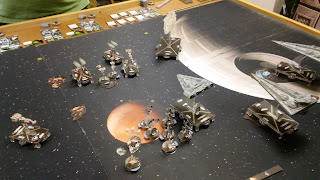 I didn't have the speed to jump into short range, so my flagship Interdictor ate first / last Defiance blasts at Long -> Medium range (far right).  The Quasar ate an Ackbar Slash with the first activation.

I was holding out hope he'd blow up my other Interdictor and forget to bag the stations, so I could at least sneak a 9-2.  Nope. 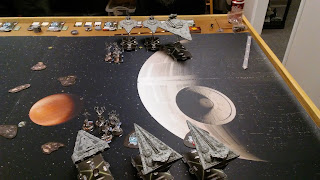 Maybe this will go better.  Also my Station Assault, also everything in front of me starting at Speed 0.  Strategy is to toilet bowl around like I'm flying a Rebel fleet, hopefully rolling up the VSDs without the ISD getting me in return. 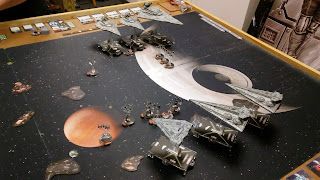 Not shown, me hunting down Whisper because all Phantoms must die. 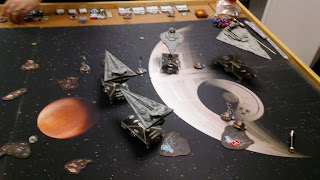 Ultimately I had the firepower to bring down one VSD, but not enough to handle 2.  He only was able to take out one station due to poor flying of the ISD.  Win for me, by the most narrow of margins.  6-5.

Josh wound up winning the whole thing, barely eking out a 6-5 of his own against Chris, who also had a 10 point win.

Clearly, I needed more offense than the Interdictor was able to provide, even with 2.  NK-7s are underwhelming at best, and ineffective at worst.  Intel Officer is wasted on a ship that wants to double arc, and with only 4 dice.  DCaps were good on the Interdictors though, worth the investment to put out even one 4 dice long range shot.

Squadron complement was terrible.  I don't think I've ever seen something melt so quickly under fire.  They definitely didn't earn their points back.  Quasars continue to be awesome, but needed better squadrons to push around.

Targeting Scrambler was good, if I could A) remember that I had it and B) actually gotten into close range for things.  Basically shut down the VSDs in Game 2, did nothing to Defiance in Game 1.