Did you know I don't usually use Nebulon-B Frigates?  That's right, I haven't put one into one of my tournament lists in... quite a long time.  I'm not sure why.  Was I scared off by how quickly Demolisher eats one if it gets up close in the old Wave 1 days, when Assault Concussion Missile was the rule of the day, and not Assault Proton Torpedoes?  Do I just not like something as popular as Yavaris?

No matter the reason, the Nebulon-B is a good ship that has stayed around and found its footing after the Wave 1 days, squadrons "being weak", and Demolisher dominance.

Also, did you know the Nebulon-B article on this site is by far the most popular Commander's Guide of all time?  It's a tricky ship to get right, and realistically there's only so many things you can do with it that aren't overshadowed by other, better ships. 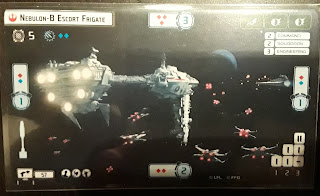 The Nebulon-B is a stolen Imperial frigate that has been converted for use by the Rebellion.  All of them are fairly standard on most things, with only two key differences between the Support Refit (51 points) and the more expensive Fleet Escort (57 points).

Both have the same guns, sporting 3 Red dice from the very narrow front arc, 2 Red from the rear, and 1 / 1 from the almost comically big side arcs.  Only a Turbolaser upgrade is allowed to boost the damage from these ships.  The anti-squadron armament is the first difference between the two, with the more expensive Fleet Escort having 2 Blue, with just 1 Blue from the Support Refit.

Defenses are robust, but the arcs work against the ship.  Double Brace makes the ship harder to kill than one might think, and an Evade helps prevent it from being aced at long range.  However, the shields are not dispersed evenly, with 3 Front / 1 Side / 2 Rear.  Don't forget as well, the side arcs are HUGE, meaning unless you are lined up pointed directly at your opponent, they probably can shoot your 1 shield side, putting damage quickly onto your hull, of which you have 5 total.  This means that it has essentially no reasonable defense against squadrons or fast moving flankers, though it does make it good against slow moving heavier hitters it can point directly at.  Simply put, it's rare that you die in a single hit, but it's equally rare that you live through more than one moderate effort to bring you down.

Speaking of movement, it has a relatively okay movement chart, with increasing yaw at each speed from 1 yaw at Speed 1 to a 2/1/0 spread at Speed 3.  It also has a Support Team slot, which means it can (in theory) take an Engine Tech, though I don't think I've seen a single one that did.

Finally, the ship has a Command of 2, putting it right in line with the "bigger than Corvette" size small base ships, and more importantly keeps you from shoving one into a Profundity.  The cheaper variant has only a single Squadron value, while the more expensive gives you two.  And both have a 3 Engineering value. 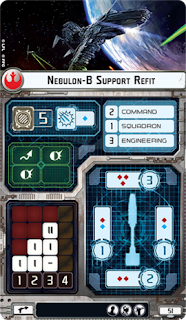 So, you want a Nebulon-B but you don't want to use it to push squadrons?  You take this guy.  Why do you want a Nebulon-B when you could take a Hammerhead Scout for a comparable number of forward facing dice for 10 points cheaper, or a CR-90 for 7 points cheaper?  Well, you might not instantly evaporate against an ISD's front arc (assuming it doesn't see your side arc at least).  But there are titles you can take that will help make the Nebulon-B competitive.

You have the potential to do 10 points of damage from long range with a Concentrate Fire, and you've got an average expected damage of 5.  That's better than you can expect from a Turbolaser Reroute Circuit CR-90 Corvette.  Add in Sato as your commander to make 2 of the initial dice into Black dice, plus the Concentrate Fire die as well, and you've got a potential for 13 damage out that same front arc!  That's a pretty good gimmick, but not one that sees a lot of table time.

The medical team is just there to maybe save you a damage when the inevitable critical damage hits your hull.

If you're committed to a gimmick in Corellian Conflict, this could work out well for you.  This build is all about spreading shields around, and moving slowly behind a slow moving tank list.  Think the Garm repair build scaled up to 500 points.  Not sure it has any business showing up in a 400 point game though. 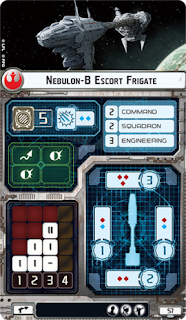 There's only one build for this as of the writing of this article.  It is what makes Rebel Ace-holes work as well as it does.  It is why 2+3 as an archetype list is better listed as Yavaris + 1 + 3.

Move, move squadrons into place, actually activate squadrons, double tap.  Welcome to Yavaris-Town, population not-you because you're dead.  Name another way to get 4 Red, 5 Blue, and 4 Black dice on a target over 6 attacks in 1 activation, with just 94 points?  Go ahead, I'll wait.

Yeah, that's pretty good.  Maybe too good.  But dealing with that is something that has to be in the back of your mind whenever you're building a list.  The only good news is that it's still on a Nebulon-B chassis, so you can blow it up by looking funny at it's side arc twice.

Within a week of writing this, Yavaris and Fighter Coordination Team were hit, HARD, by the Errata.  Now you might as well go back to the old days of Yavaris, and maximize the squadrons activated if you've already got your squadrons in position:

The new Yavaris errata keeps you from double tapping with squadrons if they have already moved during the activation.

Still, there is no other reason to take an Escort Frigate.  Really, you can forget the second titled "Nebulon-B Support Refit".  Yavaris is still the Alpha and the Omega of Nebulon B's.
Incoming Transmission From: Biggs at 07:32
Email ThisBlogThis!Share to TwitterShare to FacebookShare to Pinterest
Labels: List Building, Nebulon B Escort Frigate, Nebulon B Frigate, Nebulon B Support Refit, Salvation, Star Wars Armada, Yavaris