What is there to say about this little guy?  It has changed quite a bit since it's release with the Core Set, and with the extra cards that came with it in Wave 1.  Even though it is no longer the cheapest Rebel ship (or even the cheapest Rebel combat ship) it has never really fallen out of favor, and each new wave seems to bring new toys for it to use.  So, let's take a look at the CR90 and what Wave 7 can bring to the table. 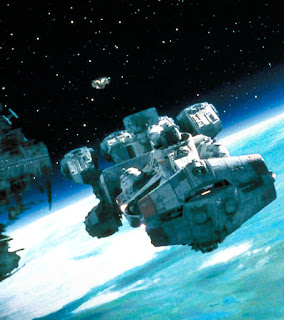 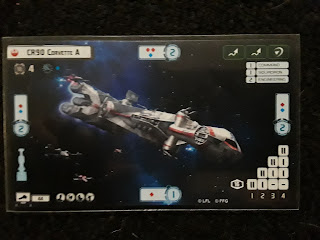 The CR90 is really not a ship with a lot of variety.  The two variants, the CR90A and CR90B are just 5 points apart, and both can be easily built to be viable combat ships for right around the 50 point mark.  Both come with the same speed - a maximum of four, with pretty good yaw at the final notches of each speed - and a Support Team for the possibility of effective Speed 5 with Engine Techs.

Defensively, the ship suffers from the Corvette Curse, having only one good defense token (Redirect), but the ship has 4 hull, and a relatively generous 2 front / 2 side / 1 rear shield spread, requiring a solid 8 damage to take down in a single shot from most arcs, or 6 if an accuracy locks the redirect out, meaning that this ship can withstand a round (but probably not two) of fire against the biggest ships - but only at long range.  Speaking of long range, the ship does have 2 Evade tokens, meaning that it can frustrate your opponent if you can use your superior speed to keep it out of Blue or Black range.  Also thinking defensively, the ship does come with a Defensive Retrofit slot, though often you will find that the ship just doesn't have the staying power to make equipping one worth the points.

Offensively, the ship boasts 3 dice out the front, 2 from each side, and 1 from the rear, as well as 1 anti-squadron die.  Both variants also come with a weapon upgrade slot, which reflects their focus on different dice colors.

Finally, the ship is one of the more simple in any fleet.  1 Command value means it reacts well, giving you the chance to Navigate or Concentrate Fire when you need to for the round at hand.  Engineering or Squadron commands are, however, unlikely to be used as the ship has a Squadron value of only 1, and an Engineering value of 2.  The 1 Command value also means that it is one of three Rebel ships capable of being packed away onto the Profundity, so it is worth looking into that option as well.

On to the Variants.

Each CR90 variant is defined by its upgrade choice, and the CR90A is the Turbolaser.  Specifically, it is the home for the Turbolaser Reroute Circuit.  With 2 Evade tokens and 4 Red Dice arcs, the CR90A can bring the "TRC" pain from long range, and still use a different evade token to avoid the return fire.

Are there other turbolaser upgrades you can put on the CR90?  Yes, there are.  None of them will compare to the "TRC".  The math just isn't on your side.

Turbolaser Reroute Circuits will, if you get two shots on a target, average out to almost 2 damage added to your average, and to your damage floor!  You can no longer miss any given shot, unless you're blasting away at a flotilla.  Consider two long range shots from a double arc, with a Concentrate Fire Command.  Here is the average damage, floor, and ceiling from the two shots:

None of the other upgrades add dice or damage, but merely help push already big attacks through, and none of those really apply here.

There are two other thing to consider though, and that is Commander Sato, who can turn your fickle Red dice into delightful Black Dice.  Let's look at the problem again, with just Sato and no upgrades:

Not quite there on the Average, but you save 7 points on the upgrade, and the Ceiling is more in reach than ever before (not that it is a good chance, but hey!).  Another thing to look into is a Pelta with Intensify Firepower! nearby.

Again, getting closer with the average, and you maintain the floor!  Definitely worth considering.

This is your traditional TRC90.  Jaina's Light lets you fire from behind obstacles or from within your own formation, or shoot pesky things like Montiferrat or Cracken that just want to be obstructed anyway.

Did you remember to take Sato or an Intensify Firepower Pelta?  Look at all the points you saved! 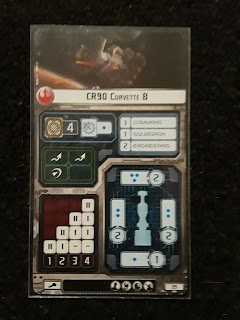 If the CR90A was a platform begging for Turbolaser Reroute Circuit, the CR90B is a platform for one of two things - either an Ion Cannon upgrade or Engine Techs.  It has an anti-ship battery of 3 Front / 2 Side / 1 Rear, and it's cheaper than the CR90A.

Because it's cheaper than the CR90A.  The CR90B with Engine Techs is about one thing and one thing alone, crashing multiple times in a single turn into an enemy ship.  We'll talk about this more in the Example Build section.

"What Ion Cannons should I use?"

If you are going the Ion Cannon route, there aren't a lot of options that make sense.  The one that made the most sense back in the day was SW7s, which when combined with a Concentrate Fire command dial allowed you to do 2 attacks of exactly 3 damage from a double arc.  3 damage is a wonderful number, because Brace only removes 1 damage.  This was pretty much the go-to Ion Cannon upgrade until... today.

If you don't care as much about the floor, you're adding quite a bit to the potential Ceiling, and the average of the double arc shot is now almost a point higher.  In addition, the damage being added is a critical effect, and the 3 damage from that effect is not mitigated by Brace at all.  All in all, you've got an 82% chance to trigger this on 6 Blue dice.  That's not bad odds, though not a certainty.  Help yourself out by dragging Toryn Farr along on a nearby ship to bring that number up to almost 90%, if you want.

Simple but effective.  Saw a lot of use in Wave 2 as a Rieekan Zombie that would park in front of something big and nasty.  It died, forced the enemy to ram it, unloaded 6 damage in a double arc, then rammed the enemy again.  Still a cheap combat ship and a lot of damage for the price of a naked Raider.

Chance to really cripple an enemy Medium or Large ship from medium range.  This is probably the better way to build one out, if you've got 4 extra points.

The CRambo.  Guns are unimportant to this guy.  What is important is going Speed 4 into an enemy and then Engine Teching into them again for 2 hull damage as the final activation of the round.  Then you pop Reinforced Blast Doors, and do it again at the start of the next round.  4 hull damage total, no dice required.  Hardened Bulkheads make this build (almost) a thing of the past, as you can't count on actually being able to ram Large base ships.  Leave off Reinforced Blast Doors for a ship that is merely suicidal or only wants to try the trick once before flying off into the sunset, or put on Dodonna's Pride as a title instead of Reinforced Blast Doors for a point more and potentially 6 damage right to the hull.

It's not the cheapest lifeboat, but sometimes when you just want to keep your commander out of the fight, it's not important how cheap the ship is, but it's important that you can outrun any trouble.  Speed 5 will keep you out of trouble, and what you can't outrun Lando might be able to save you from.

Early Warning System - 7 points to try and protect you from squadrons.  That's a lot of points when you still melt after two moderately big attacks from ships.  After all, if they are dedicating a bomber force to your 50-ish point ship, what isn't that bomber force hitting?

Dodonna's Pride - 6 points for a Blue Critical Effect.  You declare the effect after your opponent spends their defense tokens, so it could be a sneaky way to force them to burn tokens and hit hull anyway, or contribute hull damage if attacking on a flank.  Hammerheads and Assault Proton Torpedoes exist though.

Tantive IV - Not quite Comms Net, but close.  Just 3 points.  The trigger for passing the token is gaining a token, so you can combine this with some token gain effects to do things you wouldn't otherwise be able to do.  Garm a 3rd token onto a Pelta with Phoenix Home at the start of the game!  Hondo both tokens onto a single target!  Relay a Comms Net token to a new destination!  Lots of options, but none that are amazing.

Advanced Projectors - 6 points to make it 11 damage to kill you.  Or still 6 damage and an accuracy.

Intel Officer - 7 points - I think this is overkill even on an Ackbar TRC90.  58 points is a lot to pay for how squishy this is as a combat ship.  Some players swear by it though.

That's it for the CR90 Corellian Corvette.  Lots more ships to rehash though, and we've got to get more Wave 7 upgrades looked at!  Until next time!
Incoming Transmission From: Biggs at 06:19
Email ThisBlogThis!Share to TwitterShare to FacebookShare to Pinterest
Labels: Commander's Guide, CR90 Corvette, CR90 Corvette A, CR90 Corvette B, List Building, Star Wars Armada, Strategy