In the beginning, there was only one small base ship for the Empire, and it was the Demolisher Gladiator-Class Star Destroyer.  With Wave 2 came the first true picket combat ship the Empire would have - a ship cheap enough to fill holes in your list, or to take multiple units to maximize your activations.  Clontroper5 showed what the power of the Raider was, with a list that maximized the amount of Raiders on the board back at the start of Wave 2.  And then... with Wave 3/4 and the Gozanti, Raiders faded off into relative obscurity.

Now, in the dead middle of Wave 7, where does the Raider-Class Corvette sit?  How is it different from when it first came out, and what role does it have with other options for cheap escort ship available?

I still love the Raider.  I think it is one of the better options for a cheap Imperial escort ship, and not only because it's cost is lower than anything that isn't a flotilla.  That being said, it seems pointless to talk about "Overall" Raiders, because the Raider I and Raider II-Class are effectively a different ship with wildly different roles.  They're both good at shooting squadrons, turning tight, and throttling up to go fast, but what they're hoping to do beyond that varies wildly by upgrade choice - and that is dictated by the ship variant.

A better question is how they differ from the other Imperial small base ship choices.  They are the most agile of all the Imperial ships at Speed 2, able to make a full 90 degree turn with no commands required, giving it amazing repositioning ability on Turn 1.  The Gladiator can do the same, but only with an upgrade and with it's speed dial set to Speed 1 afterwords (Engine Tech).  The Arquitens can as well, but again it requires a specific variant and upgrade (Command Variant and either Engine Techs at Speed 1 or Nav Team with a Dial + Token).  The Quasar Fire can, but only with Moff Jerjerrod, who lets anyone do the trick.

They also are the most adaptable ships, with only a Command Value of 1, letting them react faster than anything the Empire has that isn't a flotilla.  That being said, they aren't squadron pushers, only have a native value of 1, and if you're thinking of putting Expanded Hangers on them you'd be better off just pushing with that flotilla instead.

Defensively, they're glass cannons.  In theory, their Brace means that they can tank a 10 damage attack if the opponent doesn't roll any accuracy results.  In reality, their brace might stop 1 or 2 damage if it isn't accuracied away.  It only takes 6 damage to push through any given arc, and with no redirect that's a pretty easy thing to accomplish. 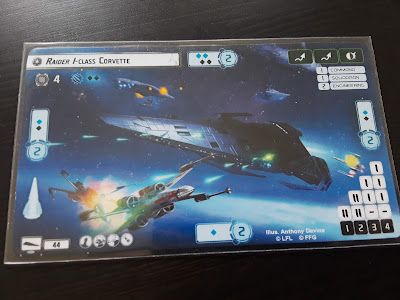 Raider I-Class Corvette - Ex-Racks or Nothing

The Raider I has one of two roles in your list, and it can, properly equipped, work for both of them.  Option #1 is to be a cheap bit of close quarters insurance to your bigger, long range ships:

The price of a CR-90A with TRCs, this Raider isn't going to shoot anything at long range.  No, instead it is going to punch something really, really hard.  4 Black / 2 Blue from the front or 2 Black / 2 Blue + 3 Black / 1 Blue if you get a double arc is pretty good, and add one for Concentrate Fire if you can manage it.  With rerolls from Ordnance Experts that's 6.5 damage from the front, or 4 + 4.5 in those two attacks from a double arc.  That's a lot of damage from a small, cheap ship.

This option also lets you do your other role, which is making enemy squadrons regret getting anywhere near your ships.  With 2 Black anti-squadron dice, and Ordnance Expert rerolls, you're getting pretty near 2 damage on anything you shoot at.  Generics will drop very quickly, and elites are almost guaranteed to be taking a hit.

That's right, no upgrades.  You're actually not losing out much on anti-squadron damage, especially against elite squadrons where you only need 1 hit anyway thanks to their brace.  While you're not going to do a lot of damage against ships, 2 Black / 2 Blue (3.5 damage) is still significantly more than a flotilla's 1 Blue.

If you need to go all-in on anti-squadron, this is the way to do it.  2 Black dice on everything, 3 on Elites, and rerolls.  68% chance to block out a regular squadron.  82% chance to tag an elite.  Plus damage.  Leave out Kallus for 51 points if you're okay with just 68% chances for everyone.

The problem is you really need to be first player to pull this off reliably, and possibly first/last the Raider into position.  More likely this is going to either force your opponent to commit to bringing down this Raider with their squadrons first, or deploy away from it, which can be a good thing.  The question is how much are you willing to invest in anti-squadron tech. 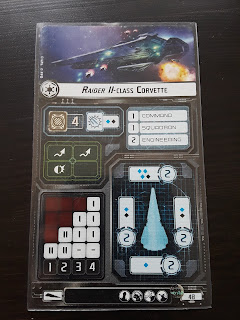 There's only one build for the Raider II-Class, which makes use of Blue dice more than Black dice. 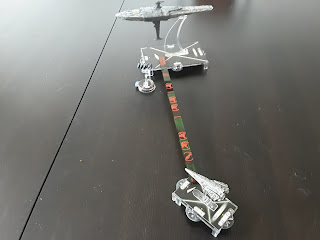 Find yourself an enemy without evade tokens, and soften it up.  D-Caps let you shoot one turn at long range.  HEI lets you get an Ion Critical off to splash 3 of your opponent's shields.  That brings your expected long range damage from 2.25 to 3.98 with no other rerolls available.  But really, you want ways to get those odds of getting that critical (58%) up a bit.  Concentrate Fire to make it 68%.  Veteran Gunners or Vader gets it to 82%.  Screed makes it a guarantee.

That makes this ship a natural buddy for a Krit Kuat, who's looking to spread damage around with Assault Concussion Missiles, and needs those empty shield zones.  It also is a good buddy for a ACM Demolisher to set up for a knock out punch.

The last bonus option for the Raider is to do what folks did in the old days before flotillas - use the Raider as your Commander's escape pod.  Speed 4 and Admiral Montiferrat will make it hard to hunt down.  I mentioned back in the original Commander's Guide for the Raider that my buddy Chris was using one in just this way - well, he's back to doing just that.