FFG Spoiling Rebellion in the Rim

New Cards spoiled for Armada, and it's an official spoil, per FFG's live twitch stream! 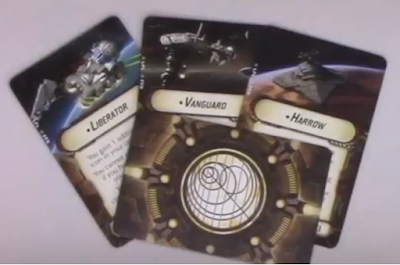 What could it mean?!

Not much to see here, aside from Liberator / Vanguard / Harrow.  Not sure what any of them do aside from a tiny bit of text on Liberator, giving you an addi(tional?) icon of some sort.  And then preventing you from doing something?  And a face-down fleet command card blocking off all the text.

Oh, and then there's this: 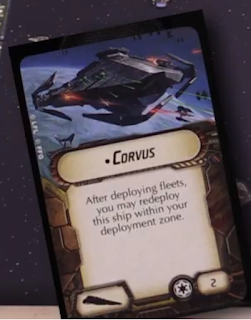 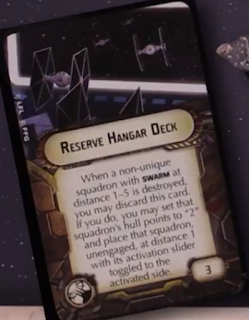 This looks pretty good for a ship that isn't usually using the Offensive Retrofit slot.  Unfortunately the only Rebel squadron it works on is the Z-95, which doesn't seem great, but the Imperials get:  TIE Fighters (already pretty good and cheap), TIE Interceptors (which dislike being attacked, and are kinda pricey), Jumpmasters (which... saving 12 points of squadron for a 3 point investment is pretty good).

This can get slapped onto the Raider, Gozanti, an empty Quasar slot, or even a hole on a bigger Star Destroyer.

It's a shame it's a discard effect, but 3 points to potentially save 11 or 12 points seems pretty good, and might motivate generics seeing some use (or making generic Jumpmasters better). 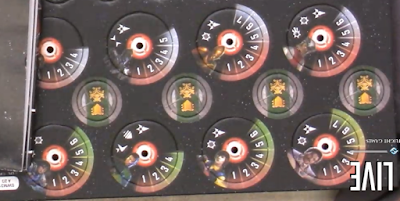 So, it's easy to identify IG-88, (presumably a different variant), Lando (assuming in the Falcon), and Hondo "Friend to All Just the Empire" Ohnaka (in a Firespray?).  Matt Mattin(sp? Sato's son's friend in a YT-2400) and maybe Kanan Jarrus (Hwk based on hull?)  It seems pretty safe to assume these are alternatives to the Rogues and Villains expansion.  Cool.

There's a new icon I don't recognize on Lando, Matt, Hondo, and that other guy near them.  IG-88 has counter.  Kanan has cloak and assault.

Lots of questions to be asked here.

Let's look at something without questions. 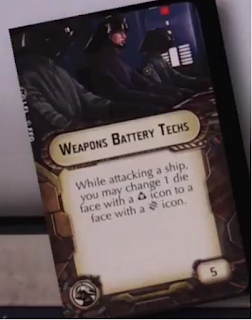 Hey, MC75 Armored Cruiser, how'd you like to guarantee a Heavy Ion Emplacement shot to go off, even though you've only got 2 Blue dice out the side?  Good news!  H9's and Weapon Battery Techs will make sure you have at least one blue crit.

It also works with the MC80 Battle Cruiser and the one Blue side die.  Or just to give yourself a 50/50 shot per die to get the crit on a Disposable Capacitor Raider. 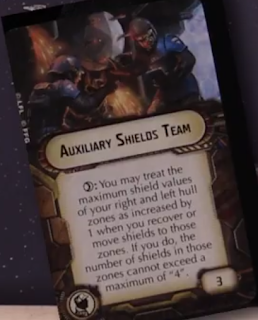 On the defensive side, there's this little beauty.  I feel like this is custom built for Redemption, or another Nebulon B, because having 2 side shields to pair with two braces would be pretty awesome.  It could also find a home on a MC80 Liberty, a CR90, or maybe a Tank Dictor?  Not a lot of Imperial ships that want this one. 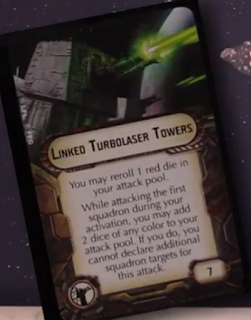 Okay, so that's a lot of dice you can chuck at a single enemy squadron. With Agent Kallus, you can put 5 dice downrange onto something, and if that something was an ISD2 you're doing it from medium range.  There's not a lot of squadrons that can take that kind of hit, and even scatter aces are going to likely be accuracied out with that many dice hitting the table.

It's even got some oomph for not-squadron shooting.