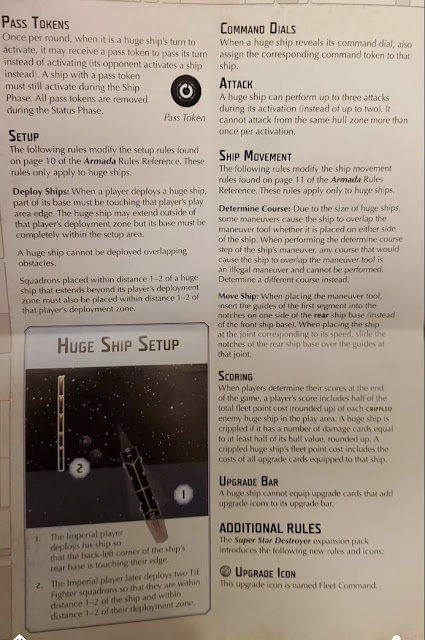 Looks like someone was a bad boy and opened their holiday present early.

So here's what we know.

Strategic Adviser only works on large ships so we don't have to worry about the implications of pass tokens and pass mechanics.  What we need to know about this is that the SSD can pass instead of activating once per round.  Based on the wording - for 600+ point games - it looks like this should be once per round per huge ship, so if you're fielding double SSD for some insane reason, you should be able to pass twice.  Also both players should be able to Huge Ship pass without issue.

In practice this works just like Strategic Adviser.  You have to be able to activate the ship in order to pass, so no early activation and then trying to pass later.  Also it should work the same way Strategic Adviser does with Raddus / Bail / Pryce.  (See FAQs)

Blockade Run:  You must deploy the ship touching your edge, which means you have to deploy it ALL THE WAY BACK.  Don't pick this objective.

This is rules as written, and it sucks.

For funsies, let the squadrons deploy at 1-2 of the SSD outside of the normal rules.  Continue to not bring this objective to tournaments.

Thank goodness we don't have to think about how this works with Raddus.

Automatic token upon reveal.  Think Raymus Antilles, only this isn't a "may".  Bear that in mind if someone forgets to take their token.  Happens on reveal, but it's written as "when the Huge ship reveals its command dial".  Thrawn's dials don't quite work.

I know what you're thinking.  "Aha!  It CANNOT attack more than once from a single hull zone!"  Well, it's the same wording as the rules reference, so Advanced Gunnery and Gunnery Teams still work as normal.  Nice try.


Looks like we measure our maneuver from the rear base, not from the front of the ship.  The thing is still going to turn like crazy with Moff Jerry piloting it.  Also it looks like if you're going to overlap with the tool, like to shimmy a bit left or right with a speed 2 and a single yaw in then out at 1/2, it'll overlap your ship pre-maneuver and not be allowed.

1/2 points for dropping it to half health.  That is ship, plus objectives, halved and rounded up.  So a 300 point SSD is worth 150 points if you can knock off 11 hull.  This can combine with "Precision Strike" for almost a full point cost.  Adds a better dynamic than "can I kill the SSD?  If no, do not engage".

You know what this is by now.