Wave 2 has been out a while now and cards are getting FAQ'd away.  Let's take a look at the highlighted changes, and what that can mean for our games going forward.  Also, we'll delve into the Tournament changes, including the major overhaul to tournament points.

The first change is a clarification - you cannot look at facedown damage cards that have been assigned to ships.  I'm not sure how many people were doing this, and what kind of mental gymnastics that they'd have to perform card counting to know what to do.  Honestly seems a little bit like too much effort to me.

Also on page 3 is a clarification on when you can pre-measure with the maneuver tool.  It is only during the maneuver phase, and only for the ship that you have activated.  I believe FFG stated in the past that this was a move to prevent "slow play".

Quite a few new questions about squadrons:  First - Can Rogue squadrons move and attack in either order?  The answer:  Yes, they can.  Easy enough.

Second - Is a squadron with Grit prevented from moving if it is engaged with 2 squadrons, one of which having Heavy.  Again, yes, you cannot move.  This gives us insight into a few things - first that Grit only checks number of squadrons engaged.  So a ship with Grit engaged with multiple Heavy squadrons can move, not because of Grit, but because they all have Heavy.

Escort then works in much the same way - if you have a Heavy squadron that also has Escort, and a second squadron also engaged that does not have Escort or Heavy, you have to attack the Escort.  Probably an issue you'll be seeing more often thanks to Intel being a thing.  However, if all squadrons engaged have Heavy, Escort will not prevent you from attacking a ship.

The final question is another engagement question:  If you are at distance 1 of two squadrons, and are engaged with one and not the other, can you attack the non-engaged squadron?  The answer is yes, you can.  Engagement only forces you to attack only squadrons, and keeps you from moving, but does not prevent you from attacking any squadron you want.

The first is a damage card:  Power Failure.  If a ship is unfortunate enough to get 2 power failure cards, it applies one fully before applying the other.  So basically on any ship that isn't Engineering Value of 4 or greater, you'd have a glorious Engineering Value of 0.

Jan Ors gets a huge buff - you cannot target her Braces with accuracy results (or I would assume, Intel Officer) when you are shooting at someone that isn't her.  That's a lot of extra token fun.

Admiral Ackbar works with Gunnery Teams / Advanced Gunnery, to the shock and surprise of literally no-one.

Devastator doesn't actually give you a freebie for taking Captain Needa to replace a token.  Good try, whoever made that one necessary.

Tractor Beams wording is clarified - if the opponent has a Navigate token, they must give it up.  If they don't have one, they must slow down (minimum speed 1).  This is not the defending player's choice.

Slaved Turrets don't actually keep you from only shooting a single squadron if you are shooting at squadrons.  That would be a real dick move if it was the other way around.

Instigator is again clarified - you can attack it if you aren't engaged by actual squadrons (just a clarification, not a change in the ruling, you could always attack a ship if you couldn't attack a squadron).  Also, Intel does not affect the ship's ability, so no Heavy phantom squadrons.

Walex Blissex returns the discarded token to you readied (green).  It is not returned in the way it was discarded.

First - no zombie revival.  Ships and squadrons affected by Rieekan's zombification are destroyed at the end of the status phase regardless of the number of hull points remaining / damage cards dealt.  No repairing the dead back to life.

The zombies are treated as being alive for all other purposes (attacking, defending, card text).  This means everyone's dream of undead Wedge eating every single Escorted attack and then attacking late in the round with 6 dice is still a viable dream.

If a ship or squadron leaves the play area, it is destroyed immediately, regardless of Rieekan - no Engine Tech shenanigans for you.

The first big change is the "Future of Armada" section - we're living in it!  We're now at the standard format from this point onward.  400 points / 135 minute rounds.

Games now end at the end of the current round when all ships on one or both sides are destroyed.  Get extra End of Round points scored!  Shoot parting shots with your squadrons!  Stupidly fly your ships off the board!

I'm not sure what it used to read, but the player with the most tournament points wins the tournament.  Seems pretty self evident.  There's a whole new MOV chart as well for tournament points.  It is WAY, WAY off most everyone's guesses based on the 300 point chart. 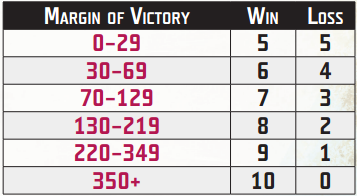 Here's the most interesting part - remember my "Tournament Points and Victory" discussion for the Wave 1 MOV chart?  Someone at FFG must have read it, because the new 10-0 magic number is 50.  That's right, lose literally anything more pricey than a naked Corvette, and you're out of the 10-0 bracket.  That being said, there is a 90 point spread for 8-2 and a 130 point spread for 9-1, so expect to see a lot more 8-2 and 9-1 results in the upper levels of the tournament scene, and likely a lot more closely contested tournaments.

That's it for all the changes this time.  We'll see if anything else crops up in the future.  Until then, have a very happy Holiday, each and every one of you!
Incoming Transmission From: Biggs at 00:07
Email ThisBlogThis!Share to TwitterShare to FacebookShare to Pinterest
Labels: FAQ, Wave 2