Match-up of the Week - You Come at the King, You'd Better Not Miss.

Truthiness must have been very disappointed to have missed the World Champions, because he's decided to take it up with our World Champion himself. 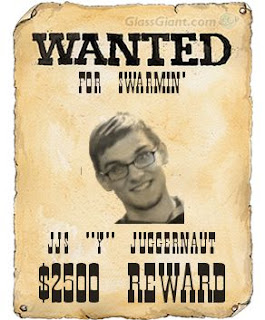 The battle will take place Sunday at 1pm EST on Vassal.  I am working until 3pm.

Stop scheduling things like this!  I can't stream unless I am off!

Truthiness comes into the fight with 4 activations, an MC80S Liberty as his heavy hitter, and Yavaris for squadron support.  He has 8 deployments to the list as well, fleshed out with squadrons and 2 Transports, one with Toryn Farr and Bomber Command, and one as a "Lifeboat" style flagship.

Fighter Coordination Team on both the Liberty and Yavaris are designed to get the B-Wings into play, with Jan Ors, Biggs, and a YT-1300 keeping his squadrons alive while they bomb.  Ten Numb works to thin the herd with his psudo-critical effect.  We are likely looking at a list that wants to fly in close formation, and pounce hard once it gets it's pieces into play.

One danger is with the lack of H9s, it lacks a guaranteed way of taking out flotillas that don't accidentally stumble into the Liberty's forward arc - even then it isn't a sure thing.

This is the list JJs ran at Worlds, and the expected list for this match-up.  A high skill list, it offers a hammer / anvil setup of the Admonition smashing against enemy ships trapped against the Y-Wing blob.  A pair of YT-1300s protect the HWKs, which allow the Y-Wings to do their work of savaging the enemy formation.  Toryn Farr makes the Y-Wings 2 dice, and the Counter 1 of the YT's into something terrible to behold.  Multiple Bomber Command Centers (BCC) give the Y-Wings a much needed reroll ability and over 1.4 damage per roll average.

5 activations, and a fairly insane 11 deployments to get the Admonition on the table means that this list has a serious advantage in deployment and the chance to first / last.  What it doesn't have is much of a bid, getting to 400 / 400.

Initiative is going to decide the match, and that puts the ball in Truthiness' court.  Each player's objectives are fairly easy to guess.  JJ's is known - Most Wanted, Hyperspace Assault, Superior Positions, and Truthiness is probably running something similar - though Advanced Gunnery / Dangerous Territory might be in the mix.  I think JJs would be okay taking First Player against Advanced Gunnery or Most Wanted - it plays to his strengths of bombing the hell out of something, and seeing the entire board before Admonition drops.  I am not 100% sure that he doesn't just prefer second player given the option.  Truthiness on the other hand I believe wants to grab first player, if only to keep Admonition out of First / Last danger, but he also falls into the Second Player preference area of having Rieekan as his Commander.

Truthiness has a decent amount of squadron alpha strike in this matchup, but the question is will it be enough to punch through the YT's and eliminate the HWKs.  As long as the Intel ships are on the board, JJ's Y's get to run rampant.  On the other hand, he could just ignore the anti-squadron game and just try to outrace JJ on damage for ships, in which case his 6 Bombers do outgun the Y-Wings by a considerable margin, but on the other hand, only Jan Ors for Intel means that he has to watch the 4 non-heavy fighters very carefully.

For ship-to-ship fighting, the MC80 Liberty outguns everything else on the board at Long / Medium range, though the Admonition had the potential for the most damage if it can get close.  On the other side of the coin, the MC80 Liberty also is probably the "best" ship at dealing with a Admonition if it does pounce, though Y-Wing and Admonition at once is something nothing can really walk away from.

I am going to put the advantage here in JJ's corner.  Between having more squadrons, more activations, Admonition, and a World Championship, he's got a pretty good chance to take Truthiness out.  Plus, he has experience against Rieekan builds, clearing out two of them in both the Semi-Final Round and the Final Round on his way to the championship.

That's not to say Truthiness doesn't stand a chance.  If he can either get a strong Alpha strike on the HWKs, or on JJ's ships, he could effectively neuter the Y-Wings, and carry the day.  This will be a game where excellent positioning, a good knowledge of your list, hot dice rolls, and good choices on objective will carry the day.

But the smart money is on JJs.
Incoming Transmission From: Biggs at 04:07
Email ThisBlogThis!Share to TwitterShare to FacebookShare to Pinterest
Labels: Armada, General Dodonna, General Rieekan, Match-up of the Week, Worlds