By now I have finished Day 1 at Worlds, and I've already played at least a few games with my list.  But as I write this it is a week before I am set to actually play.  So here is what I am taking to Worlds, what I am going to try to be doing, and my rational for my strategy.  We will see how it actually works in practice, but play testing it hasn't done too bad. 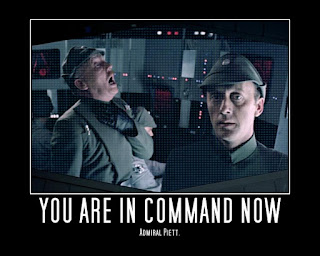 I have been a fan of Red dice for a long time, and asked myself a while back when playing around with Gozanti Assault Carriers "What is the best way to get Red Dice into the fight but without the unreliability that comes with them?"  And they are unreliable.  37.5% chance to just straight up miss, per die.  Only a 12.5% chance per die to get an accuracy if you need to swat a flotilla out of the sky.

Only a few ways to modify or reroll the damn things, all with some sort of drawback:

- Leading Shots - Reroll what you want, but you need to be in medium range and give up a Blue result.
- Veteran Gunners - Reroll EVERYTHING no matter what.  Good to bringing up the floor, but doesn't really bring the average up by that much.
- Concentrate Fire Token - Reroll one die.  Kinda meh, and need to get that token from somewhere.
- Turbolaser Reroute Circuit - Great for turning one die into the best option, but needs evades, so it's only really good on a CR90 or MC30c.  Plus it is only one die that is effected.

...and that brought me around to Darth Vader, and the Gozanti Assault Carriers.  "I'll put a ton of Red dice down at my enemies, and it'll do a lot of damage!"  Problem:  It didn't.  I had forgotten a few key factors.  First, Darth Vader needs superfluous defense tokens to work, which the GozACs don't have.  Second, quality of activation is just as important a consideration as number of activations.

So with that firmly in mind, I set out to get the best quality activation, and get it into the best position through deployment advantage.  Without any more preamble then, here is my list:

Vader's flagship is the lynchpin of the whole list, much the same way that Rieekan's MC80 was the lynchpin of my Rieekan's Raider's list.  It has to be the last ship on the board for the gimmick to work.  It does an absolutely ridiculous amount of damage from the front arc, close to 8 average damage with over 1 average accuracy (not necessarily at the same time).  Good enough to threaten a Flotilla at long range.

Needa is there to keep TRC90s honest.

ECM is there to keep me flying against accuracy generators.

On the other side of the coin, I have expendable things.

Neither Flotilla nor Raider is critical to the mission, and all can be thrown away for the greater glory of Darth Vader himself.  The two flotillas exist to get the TIE blob into the fight, which might better be expressed as 3 distinct fighter groups - but more on that in a bit.  Both have expanded hangers, building on what I think the key role of the flotillas should be.  Tidus chills out on one of the two Gozantis.  He is there because I have yet to play a single game where he wasn't worth the 2 points I invested in him.  He exacerbates my opponent's deployment errors, turning a small mistake into a big one, a big mistake into a catastrophic one, or turning a minor miscalculation based on incomplete knowledge (where is that ISD2 going anyway?) into something that can't get where it needs to be without spending a valuable command.  Also that flotilla is Vector, and all my squadrons are speed 4, non-heavy.  For the biggest effect, it is there to put Mauler Mithel into just the right spot, but it can also slingshot other fighters to where they need to go, such as getting out of position fighters over to the ISD on Turn 2, so they can be activated by the ISD on Turn 3.  I originally figured it would be the least useful upgrade in my previous builds, but it proved invaluable in several games, so I had to keep it in.

The other flotilla is Suppressor and is there to try and kill ECM whales.

The Raider was originally going to be geared to anti-squadron fire, with Agent Kallus and Impetuous.  It had a hard time getting where it needed to be, as the thick of the squadron battle was where the Gozantis tended to go, and just got itself in the way.  Now it is just fodder, and a mobile obstacle to keep anything from outflanking the ISD.  It can certainly anti-squadron shoot if it finds itself in just the right scenario though, but that is no longer it's primary goal.

Squadrons are an interesting beast, as I built them to counter Rhymerballs, YT-2400 spam, and Rieekan Aces.  They can be grouped into 3 distinct squadron groups:

The groups function semi-independently from one another, with Group 1 acting as a fighter screen for my ships, and Group 2 being a psudo-Interceptor group that jumps out to engage an enemy group.

Group 3 is a reserve group of sorts, with their number being pulled from to either boost an early attack with Mithel or Group 1 (Howl bumps up the TIE damage greatly), or just to split up and go where ever they are individually most needed.  Each group is capable of dropping a single YT-2400 in an activation, with Howl's addition to a group adding quite a bit of damage to that number.  They would have to go against a very specialized list to not earn their points back if they are destroyed, and they should be able to shred any light / medium squadron compliment.

TIE Fighters, though they are low hull squadrons, somehow don't get anti-squadron attacks against them as much as I worried they would.  Usually because I engage with them against opponents that have juicier targets to shoot than 8 point flak.  Against dedicated anti-squadron ships, I will almost certainly have to work to keep them out of the fight, or use their maneuverability to keep the fight away form the danger.

TIE Advanced - one almost certainly has to tag along with Mithel, as he tends to be Target #1.  The other can tag along with Howl, if she is in danger, or can double up to hold Mithel and the Jumpmaster around longer than they deserve to be.

Most Wanted is my "Don't Pick my Red Objective" objestive.

Fire Lanes is a high thought objective, that I will be playing more or less by ear.  If I think that I can get away with it, I will gladly split the objectives into 2 : 1 on different sides of the map, and park the Raider (almost) on top of the 1 to get 90 points over 6 rounds.  Otherwise, cluster them and 8+ medium range dice of death swooping in from a flank to ensure they are all mine.  At the very least it will telegraph where my opponent will need to go, and I can be where they won't be able to stop me.

Dangerous Territory is another odd one.  I considered Superior Positions, but discounted it due to the fragile nature of my squadrons.  If I came up against just the right opponent, it would go very bad, very fast.  Instead of "I traded my squadrons for 90-some points of their squadrons" it becomes "all my squadrons are dead, and their remaining 40 points of squadrons are running amuck on the ISD2's rear arc".  Dangerous Territory on the other hand lets me collect 45 points with my Raider, while the ISD pounces on whoever decided to run through the rocks on Turn 2.  This seems like a good plan.  Yes an Interdictor can mess with the rock placement, but this ISD eats an Interdictor and over a quarter of the opponent's points in 2 salvos.  I'm willing to take that matchup.

1:  Vector - goes down first because I can use it to reposition any squadrons deployed around it almost at will.
2:  TIE Fighter x2 - Delay.
3:  TIE Fighter x2 - More delay.
4: Suppressor - lets me put down more squadrons in whatever direction I see the battle unfolding.
5:  Howlrunner / TIE Advanced
6:  Major decision time:  If I need the Raider to do something sneaky (Fire Lane odd token) then he needs to hang back to as far as 8.  If I am concerned about squadron deployments / activations, I may need to hold Mauler Mithel back until deployment 8.
7:  Squadron delay or surprise Raider to get Mithel into the best position.
8:  Out goes whatever I was holding in reserve.
9:  ISD better be the last ship to go down on the table.

Red:  Most Wanted is almost certainly a "no" just on principle.  Advanced Gunnery also a no.  Precision Strike isn't anything I am too worried about, especially with a bomber list - feed the TIEs.  Opening Salvo is... questionable, but might be worth it just to lob 7 Red dice downfield with the first ISD blast and swat a CR90 or Raider out of the sky.

Yellow:  Contested Outpost - YESSS.  Commit and tell me exactly where you are going with your fleet.  Fire Lanes - Put this one into the "maybe" category.  I am sure I can make a play for the objective tokens.  Hyperspace Assault - Not a terrible choice, but not a good choice with my list.  I don't have the all-arounders to punish certain things jumping in.  Yavaris?  Yeah, I can handle that.  Admonition / Demo?  My butt is puckering already.  Fleet Ambush?  Nope, I lose my biggest advantage - ISD drops last!

Blue:  Intel Sweep - I can probably win this one just by blowing up the objective ship, and having Raider pick up some tokens.  Doable.  Dangerous Territory - Again, this is why the a Raider is on this list.  Turns on a dime, can pick up all obstacles without forcing anything else to deploy nearby.  Minefields - I've yet to see a minefield I couldn't deal with somehow.  Superior Positions - Almost certainly not.  Again, the ISD needs to be the last ship on the table, not the last ship before my opponent puts down his first.

Biggest Worry:  Most Wanted, Fleet Ambush, Superior Positions - of the three, Most Wanted lets me play the game I want - I just have to be very conservative with my flagship.

My objectives are all additional score objectives because frankly I think I need the help to get good tournament points with this list.  It is designed to win by not having 184 points of Vader taken off the table, and winning the squadron battle (if one exists).  I think I can reasonably expect 7-4 and 8-3 wins out of the list, sans any objective points, but either Most Wantec or Fire Lanes could turn that into an easy 9-2.  10-1 seems... unlikely, unless I run up against someone who makes some major mistakes, and that's something you should never count on.

For the tournament I am expecting that 32 points is enough to get top 2, as that seems to have been a fairly safe bet in the past with a 4 round tournament.  After all, 29 points was good enough at Martinsburg, and there were some really good players there.
Incoming Transmission From: Biggs at 09:00
Email ThisBlogThis!Share to TwitterShare to FacebookShare to Pinterest
Labels: After Action Report, Armada, List Building, Strategy, Tactics