Ranking the Upgrades - The Weapon Teams

Weapons Teams make things dead, and are thus the backbone of any fleet.  I should probably get around to ranking them, right?

Plus, I need a filler article, because wow am I slacking off at putting quality strategy articles together.  You guys love this pap right?  I'm expecting no less than 6 comments on how I ranked something too high / too low. 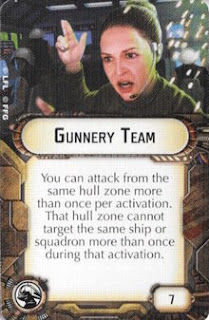 Again, here is a brief explanation of the tier system.

None - Nothing hilariously game shattering in this upgrade slot.

Ordinance Experts - 4 points for Black Rerolls?  How could you not take this upgrade on anything at all that can realistically dump Ordinance at a target?  I've seen people put this on a VSD1 or ISD1 because "Black dice".  Even the Raider 1, which has a total of 2 Black dice from the front arc only, sees this to help out with anti-squadron fire and boost damage.  It's just that good.


Gunnery Team - Okay, before you say anything it is a solid card.  Would I say that it is a no-brainer upgrade for an ISD2 or MC80 Liberty?  Well, you're going to be hard pressed to come up with something better unless you're doing something sneaky.  It isn't a card that goes in every slot every time, and it DOES teach bad tactics.  Plus it makes Advanced Gunnery into a non-usable Red objective, and that makes you one dimensional.

But what it does do is it takes one of the fundamental rules of the game, and breaks it to give you 8 dice on two different targets, and sometimes that is all you really want out of 7 points.


Flight Controllers - This is a good card to compete with Gunnery Team for a space on your big squadron value heavy hitters.  Boost your activated squadrons anti-squadron value by a single blue, and it becomes more efficient the more squadrons you activate and command.  Good, fills a role, but not particularly flashy.

Veteran Gunners - One of the few ways to reroll Red dice that don't involve a Dark Lord of the Sith choking your crew members for failing to shoot accurately.  I really like this card for the Assault Frigate, more than Gunnery Teams, though I have a hard time putting it on anything else.  Maybe the Imperial Light Cruiser when it shows up.  Broadsides for days!

Sensor Team - Niche to a fault.  "Put me on something that can't take H-9 Turbolasers" or just wants to save points (5 vs 8).  Does work with blank dice, so a definite guarantee of the accuracy instead of a 6/8 chance per die with H-9s, but costs one die to work - painful to use with already small numbers of Red dice.  Does nothing for all Black batteries.  Put it on a GSD2 with Screed to hunt flotillas?  Put it on an MC30-S to free up your turbolaser slot for TRC?  It has options, but they aren't spectacular.

Ruthless Strategists - A card that is hard to justify over the other options for the slot - it presupposes a very niche ship - one that is focused on anti-squadron fire to the exclusion of all else.  A Raider 2 might use this to get the most out of the 1 Blue die, but how often do we see this over the Raider 1?


Fire Control Teams - With the FAQ ruling out stacking critical effect shenanigans from XX-5 and standard critical effect, what good is this?  Maybe doubling down on Ion Cannons and regular criticals?  I don't think many people like this card anymore.