Gonna take a break about talking strategy, since that is what literally everyone is going to be talking about for the next few days, and since Saturday.  No, today I want to talk about what even the FFG folks were impressed with:  Community. 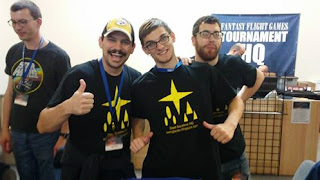 We actually have something really special going within the Armada community.  By and large, we haven't seen any major incidents of people playing dirty, or violating a perceived "spirit of the game".  Our players, upon meeting one another in person for the first time, have greeted one another as old friends.


And really, that's pretty darn amazing.  For a game that is frequently thought of as the red-headed step brother to FFG's X-Wing, we've somehow wound up with an awesome group of players.

Thursday morning we had breakfast as a group - not everyone could be there.  And we did on Friday as well.  People hung out with folks they otherwise wouldn't after games late into the night Thursday and Friday.  We played Destiny demos with folks we had just met in person.  We hitched rides.  We left our playing pieces out on the table as we walked away.  We gave Jimmy hell for not having Engineering Tokens as prize support.  We sat together at lunch and bull-shitted about what looked good in Wave 5.

Worlds was a blast, but the community is much more than that.  More than meeting up in some distant city to play a game.  The little things are what make it special.  As we all wind down, if you did go to Worlds, bring that community back to your local store.  Welcome the new players that come in as if they were someone you've known for a long time.  When you travel somewhere else for a Regional (they're starting next week!), go have breakfast with the locals - or dinner!  Send Clontroper5 an email, wishing him well.

Be welcoming, be an ambassador.  This shouldn't be hard if everyone is like the folks I finally got to meet face to face at worlds.  We've got a hell of a World Champion to set an example, but it is up to all of you as well.

Until next time, fly fast and win big!
Incoming Transmission From: Biggs at 01:55
Email ThisBlogThis!Share to TwitterShare to FacebookShare to Pinterest
Labels: Armada, Community, Worlds