Continuing onward with Corellian Conflict so we can get to the Wave 5 goodness ahead.  Just got to talk about the A-Wings and B-Wings!  Today it will be the A-Wings. 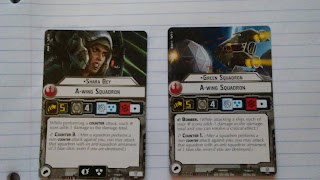 One point more than the standard A-Wing, it drops Counter 2 to a mere Counter 1 to pick up the Bomber Keyword.  Nothing spectacular in and of itself, but a nice boost to anti-ship damage and a unique tag for Rieekan shenanigans.  Works with BCC.

Yet another "WOW" squadron, Shara is perfectly capable of holding most of the Imperial starfighters down by herself.  Counter 3 and during Counter attacks critical results count as damage, added to an already defensive 4 hull, brace, scatter, for just a single point over Tycho.  I think she works best in this as a lone pinning unit like you would use Tycho in the past, to punish an opponent that didn't bring any or enough Intel.
Incoming Transmission From: Biggs at 07:00
Email ThisBlogThis!Share to TwitterShare to FacebookShare to Pinterest
Labels: A-Wing, Armada, Commander's Guide, Corellian Conflict