Looking at the Regionals Data

It's been a little over a month since the Wave 5 Regionals Season ended.  Let's take a look back through the data and see if we can find any interesting patterns.


If you haven't looked at it before, you can find the data from the Wave 5 Regionals HERE.

What am I trying to answer?

The primary question this data hopes to address is "What are the differences, if any, between the fleets showing up at the top tables and the general attendance of Armada Regional Tournaments?"

Now that we have more data available we can also look at: "How has the composition of Regional tournament fleets changed as new waves of ships have been added to Armada?"

Is this data any good at all?

I think so, yes.  It is certainly improved from the first data set.

Even though they were part of the same season I have chosen to keep the Wave 3/4 season and Wave 5 season separate.  The samples sizes are still plenty large and it's nice to see the impact of the wave change.

The sample size for the winners column can be relatively small.  For that reason I tend to focus more on the Top 4 column in the data and comparing it to the All column.  The sample sizes are better and my gut tells me that anyone who managed a Top4 finish had a fleet capable of winning.

So, thanks to a lot of help from volunteers the data set is growing more robust each time.  That's really awesome.

So, what is it good for?

Starting and sometimes settling arguments?  It won't help you build an ultimate unbeatable fleet.  It will give you an idea of what kinds of fleets you might expect to see at a Regional.  It tells you the frequency of what is showing up and how often it is successful, but in no way measures skill or luck.

What have we learned so far?

We will roll through this one section at a time.

Attendance numbers are fairly similar across all three seasons with an average of about 18 players per tournament.  I was expecting some growth, but there were some inconveniently located tournaments this season that may have impacted things.


The Wave 3/4/5 season was certainly the opposite of the Wave 2 season.  It was apparently the Rebels turn to take over the top tables.  It evened out a bit with the arrival of Wave 5.

I'm not entirely sure where the switch came from.  I noticed that some of the more successful fleet types for the Imperials in Wave 2, didn't really show up in the more recent tourneys.

I do think that the coolest thing about the Wave 5 data is that 13 of 16 admirals show up in Top 4 fleets and 11 of 16 managed to win a tournament.  This speaks to some exceptional balance in the game's design.  Just about any admiral can find success at a serious tournament.  Garm, Tagge, and Konstantine do seem to be bringing up the rear in regards to admiral performance in the game.

Rieekan and Motti's success is I think less about their power levels and more about how well they fit in a variety of fleet types.  Neither needs to really be built around and can work with several different archetypes.  It really isn't surprising how frequently they show up.

Another way to look at the admiral data is to compare the percent difference between how often they show up overall and in the Top 4.

From this data you can see some admirals that do not show up as often but do find success when they do.  Cracken, Madine, and Ozzel don't see a ton of play, but the players using them seem to find a relatively high level of success.  I think lots of players were eager to try out Sato, but don't seemed to have cracked him yet given his poor relative performance.

I should point out that two of my favorite admirals, Garm and Vader, are some of the worst Regional performers. 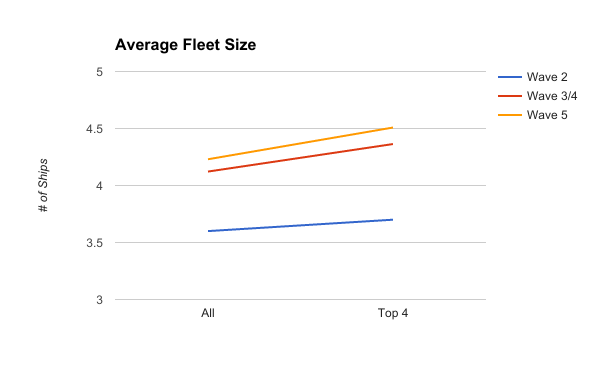 Fleet size has definitely increased since Wave 2 with a little less than one more activation per fleet.  That is definitely the influence of the flotilla.  But the flotilla seems to have more brought up the bottom than increased the overall average.  The number of low activation fleets has dropped drastically

There is a slight trend towards larger fleets at the top tables, but not a really large one, just 4.2 to 4.5 ships.


The real change since the emergence of the flotilla has been the relative disappearance of 2 and 3 ship fleets.  It has not caused the top end to really shift too much at all.  Most everything is clustered around 4-5 activations.  I think this is due to the flotilla giving fleets that aren't a swarm a way too add in additional activations. 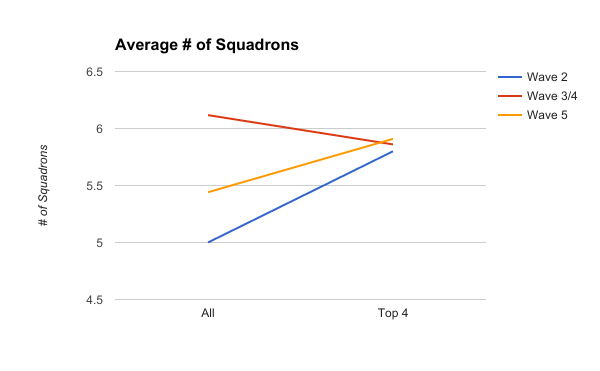 I'm not even sure what to make of this data.  People are bringing more squadrons since Wave 2, but the average number of squadrons in Top 4 fleets haven't budged across the 3 data sets.  Pretty remarkable actually.

Fleets with no squadrons at all have drastically reduced since Wave 2.  They still can be successful, but certainly aren't as common.


Even though the absolute number of squads hasn't changed much, players do appear to be spending more on their squads.  I think the new aces from Corellian Conflict and some other more expensive options are behind this. 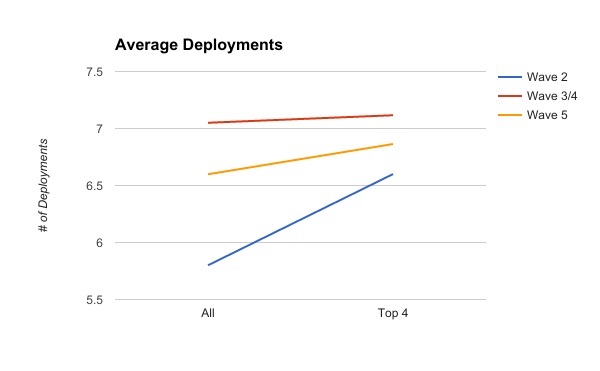 Overall the number of deployments has been increasing, but then the trend towards high deployments doing better has been going down.  I guess more players are understanding the importance of Turn 0.

Another big impact of the flotilla has been the general reduction in appearance of the CR-90 and Raider.  Players are using the flotillas rather than the corvettes for extra activations.  At least in the case of the CR-90 it is still seeing a fair amount of success when it is brought.

If there is a single ship that is doing well in the new Wave 5 meta, it's the ISD.  Its relative performance has increased with each wave and it seems to be really doing well for the Imperials right now.

To nobody's surprise, the Gladiator has been the consistent performer among Imperial ships for some time.  One thing I did note, was the relative disappearance of multiple GSD fleets in in the Wave 3/4/5 season.

I wanted to add that when I look at the data as a whole what I really see is a well balanced game with a variety of effective strategies.  At this point I don't even track fleet archetypes as I don't feel it is particularly useful.  There is an awesome variety of fleets that do well in these tournamnets and is speaks to a good job by the game designers.

So, what do you think?  This is just a quick overview.  There is a lot more data in there to look at and discuss.  Let me know if there are other questions and I will try to answer them as best as I can.