There's a bit of something I want to talk about that I think gets passed over in the squadron game, and that is the use of squadrons in groups larger than a single piece.  Specifically, I want to talk about the mentality of building a good fighter force as more than just "I need X number of points in anti-squadron" and think about "what can I effectively use" and "how will these squadrons work together to accomplish this mission?"  I know, easier said than done. 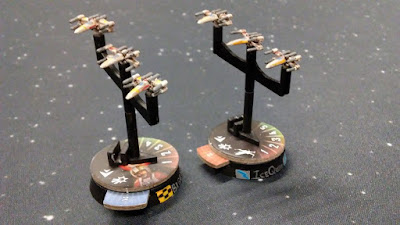 To start, we need to talk about how most of us look at fighters.  We have a blob of squadrons, and that blob is going to get pointed at something until that something is dead (or our blob is).  This is crude and inefficient, but in sufficient numbers it can work.  YT-2400 spam, Rhymerballs (especially Fireballs), TIE Swarms, and even JJ's Y-Wing Bombers to a certain extent behave in this way.  There is a clearly defined goal for those squadrons, and often they can be used at dual purpose as well.

The blob moves as one big slow unit, until engagement with the enemy, in which it turns into a bunch of smaller units all trying to maximize their usefulness.

Step One - Span of Control

What we are going to do is organize our squadrons into specific task forces.  These will be self contained groups that will be able to accomplish specific goals that we have for them.  In order to do so we first have to ask ourselves "how many units should go into each group?"  The simple answer is dictated by the Span of Control.  In practical terms, the Span of Control is the number of resources that are being handled by whoever is responsible for them, and we have a few ways to figure out what our ideal Span of Control is for various groups.

The simplest Span of Control is "1", otherwise known as "freelancing".  This is a lone squadron that just goes and does whatever it wants to do.  A good example of a freelancer would be Tycho, or Han Solo.  A good unit that has a role, but doesn't really work well with others.

The next Span of Control up would be "2", and is our basic group composition for Rogues and other squadrons we don't need to activate with ships.  This is also our baseline for a "pocket carrier" - the naked flotilla (on both sides).  It also matches perfectly with a single squadron deployment.

Things capable of managing a Span of Control of 2 include:
The list goes on, including token shenanigans, Gen. Organa (Wave 6) and Tarkin and small base ships, etc.  Also worth noting, this is the effective size that can be controlled with an Imperial Relay.

Span of Control 3 is a little more difficult to get, but it has an advantage of getting more squadrons into any given group than an equivalent Span of Control 2 plan, and is thus a straight upgrade over relying on Rogues or the Blob.

As you can see, this list very much favors the Rebels list building, giving them a lot of ways to get a 3 squadron force into a fight, while the Imperials really only have Gozantis or VSDs to push 3 squadron forces.

On the other hand, here is the list of 4 squadrons:
Here we can see the Imperials are given a few more options, but again the advantage is slightly with the Rebels.  We can expand out to 5, which is just the MC80 Command w/ Expanded Hangers and the ISD w/ Expanded Hangers (or token shenanigans), or to 6 which is both those things plus tokens.  One thing to note with a Span of Control of 6, is you can easily consider it to be 2 forces of 3.

Step Two - What Task Am I Doing?

Now we know how big we can make a given group, now we need a task for it to accomplish.  We are in list building, so we are thinking generally here.  "I want anti-squadron" or "I want to damage enemy ships" is a good starting point, but we can get slightly more specialized tasks like intercepting enemy bombers.

Let's look at a couple of squadrons from recent tournaments and see what they were set up to do:

Looking at the Span of Controls for the list, we had 3 distinct groups:  2 Gozantis w/ Expanded Hangers, and an Imperial Class Star Destroyer.  As such, we had 2 Task Forces of 3, and 1 Task Force of 4.  They were set up as follows:
From here you can see the plan involved in the squadron game.  Each group has its set goals for what it wants to do.  For a bit of extra flexibility though, we can look at the reserve group and split it again into two distinct forces:  Mauler Mithel / TIE Advanced as an offensive group, and the Jumpmasters being the true supporting reserve.

For Spans of Control for the list we have a Pelta Command Ship, and two Transports.  (And Corran Horn as a Rogue)

I played this list at Regionals and I wasn't quite sure what I didn't like about my squadron game, but it didn't feel 100%.  I thought it might be a lack of Intel, but looking at it from this angle I realize it was because I didn't have a fully thought out idea of what I wanted my squadrons to do.  The general idea was anti-squadron, with bombing runs after enemy fighters were clear from the sky.

Task Forces 1 and 2 did good work throughout.  Norra, while useful, felt lost, because she wasn't really able to be part of the bigger picture.  Horn, while he did the usual good things you expect from a Rogue, also felt out of place because frankly he was.  The Span of Controls were all wrong - I had 2 Task Forces at 3 activations each, and only the Pelta could do that without saved tokens.  (I saved tokens.)  It was uglier than it had to be.  A better plan, ironically, would probably have looked something like this:

Not only does this actually give us the correct number of squadrons for each of our Spans of Control, but we save some points removing Horn.  Norra still doesn't quite fit into any of our groups, but can remain as a single squadron with a specialist role (admittedly one she might not use) or as a reserve if one of our other units is lost.

That's all we really have time to discuss right now.  I hope I can come back to this later with more thoughts and ideas.  I really want to look at more synergistic Imperial fighter compliments, or other Rebel builds.
Incoming Transmission From: Biggs at 20:39
Email ThisBlogThis!Share to TwitterShare to FacebookShare to Pinterest
Labels: List Building, Squadrons, Star Wars Armada, Strategy