I'll rocking the Stele Open today! Like MD Regionals, I'll be posting updates as I go. Here's my list:

1 Shara Bey ( 17 points)
2 A-Wing Squadrons ( 22 points)
I decided to have a go at Madine after seeing him in action with the Liberty at the MD Regionals. I've said it before, but I cannot reiterate how well Madine and the Liberty go together. The most glaring weakness of the speedy Liberty is that poor Nav chart. Madine does a lot to help minimize that weakness and maximize the Liberty's speed and firepower. Using Madine happened to coincide with my experiments with the CRambo90, which resulted in a happy accident of list building. The two of them together make a rather absurdly good combination.

I originally had a tooled up Liberty and only Tycho and Shara for squadrons. Putting the list through the ringer of my usual Vassal opponents, however, showed that it needed a little more help in the squadron department. At JJ's suggestion I went minimalist with the Liberty itself. That allowed me to add another GR-75, taking the activation count up to 6, and adding a pair of A-Wings. I jumped back and forth between Mon Karren and XI7s. The former is useful against more things, but XI7s won out because they let me lock down braces with accuracy while still limiting redirect usage. At the end of the day, I expect the Liberty to go hunting for the things XI7s are great against. Plus, it saved me 2 points. 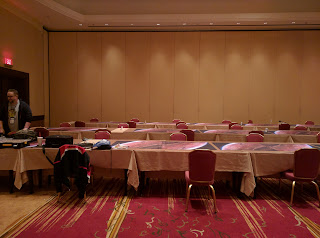 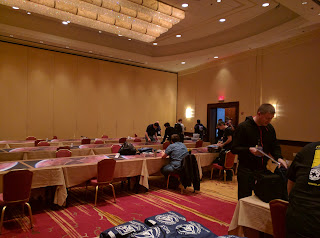 Round 1
First match was against Treb Courie. I was first player and took his Precision Strike. I over committed Liberty, which only survived Yavaris B-Wings by sheer dumb luck. It limped on until the last turn, allowing me to table Treb for a 415-229 win for me. 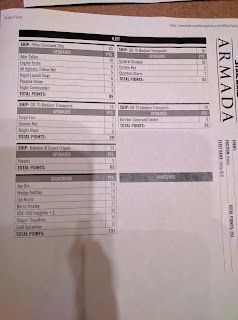 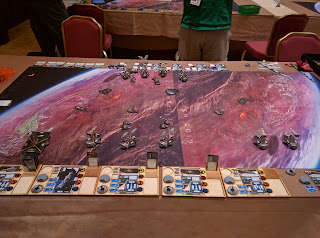 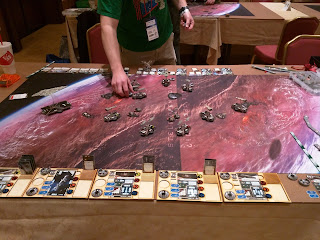 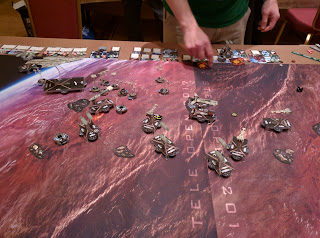 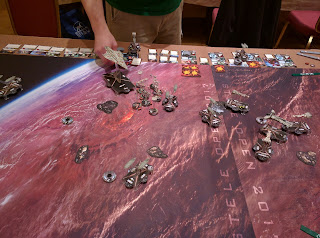 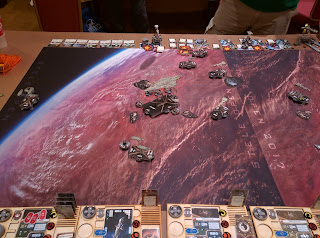 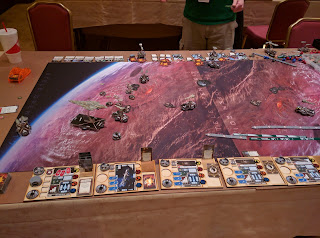 Final board state (we only resolved Lib and his flotilla and called it): 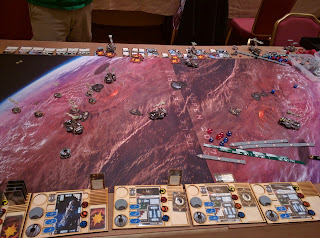 Round 2
Next game was against Mike Taglioni! He's running 3x Slaved Turret Kittens, 2x Gonzos and a mix of Acres. I took first player with VIP as the objective. Luck went against me this time, with a couple of my ships going down with lucky accuracies. I once again mistimed the A-Wings, costing me the Liberty. I also probably swung the Liberty out wide too far, with it only really getting off one good shot. Final score was 267-370, with his lone surviving Kitten running off the with VIP. 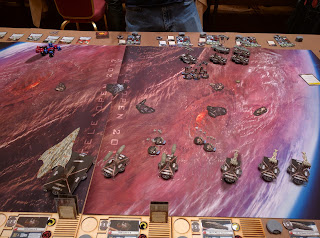 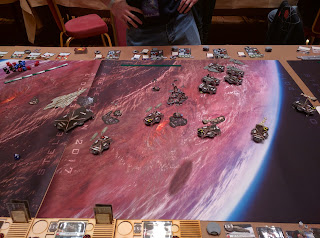 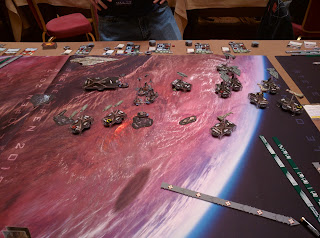 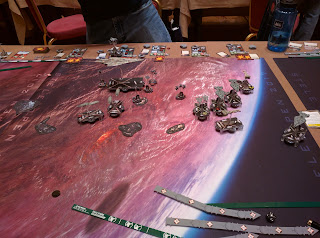 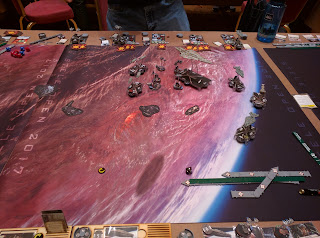 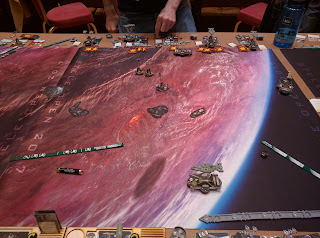 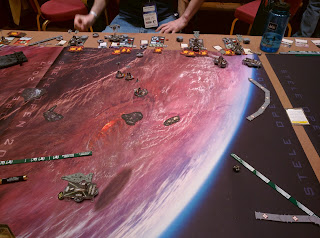 Round 3
This round was against Brendon MacLeod. He was running full Clonisher, a Raider, and 3x Gonzo supported by a nasty anti-squadron ball. He took first player and took my Navigational Hazards. I had him up until the last turn. The A-Wings and the GR-75s bled his squadrons and I managed to kill 2x Gonzos and the Raider. However, Demo swung into get two kills on the final turn, swinging it to 214-250. 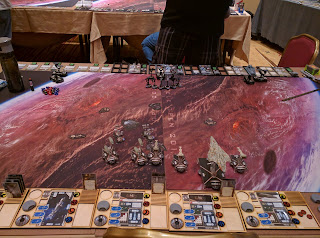 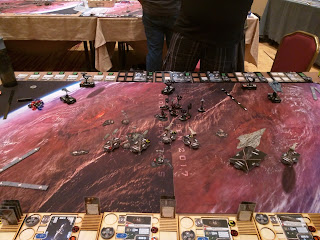 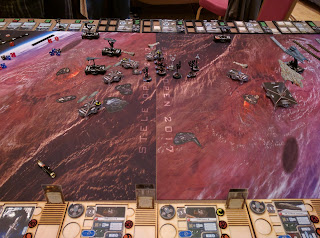 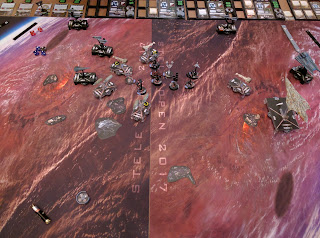 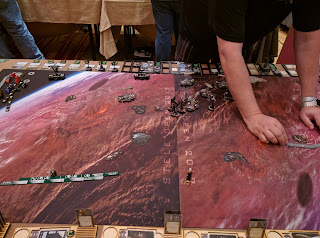 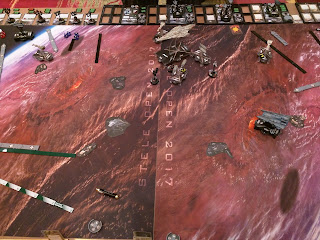 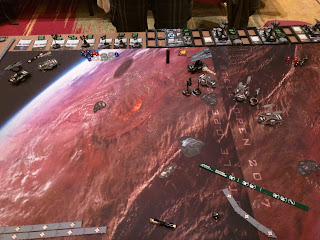 Round 4
Final game was against Sean Masson. He was running a fulled kitted ISD II Avenger, 2 Kittens, and a small anti-squadron ball. I took first player and decided to go balls to the wall by taking his Advanced Gunnery. It work out very well. I bullseyed a kitten on turn 2 and just ran the table from there. The Advanced Gunnery ISD didn't get a frontal shot all game as Madine ran circles. Final score was 520-39 with a table at the first activation of turn 5. 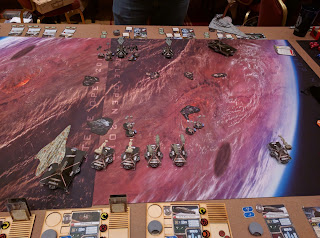 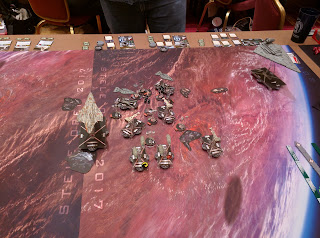 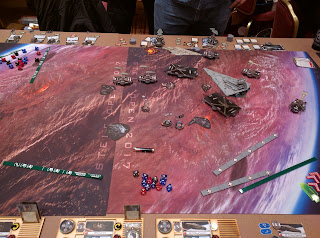 This was the Liberty's RAW ROLL at the ISD: 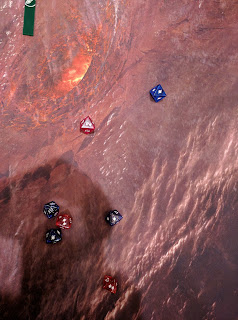 Final board state (the CR90 fired and that was all that went for turn 5): 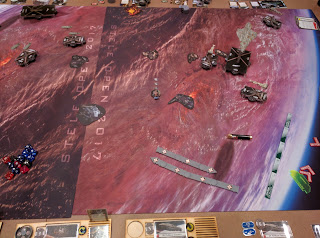 Conclusion:
I managed to claw back to #5, which all things considered  was pretty damned good. All the top 4 declined to play the final cut games. The prizes for #3 and #4  were the same and #1 and #2 played in round 4, so Jeff was nice enough to concede the top prize to Dan Nowak. Congrats to him! Pete Hodgkins will be posting the final standings on the NOVA Facebook group, which I'll be sure to add later on. It was a great day of games with some impeccable play. Thanks to everyone who played!
Incoming Transmission From: Truthiness at 08:00
Email ThisBlogThis!Share to TwitterShare to FacebookShare to Pinterest