Quantity vs Quality in Activations

One thing that we can all agree about in Armada is that Activations are important, to the point where activation advantage is now as hotly contested as First Activation.  Being able to delay an important activation can give you a sizable advantage in the game.  But what good players understand, but don't specifically talk about, is that the quality of that activation you are saving or using is really what is important.  After all, it doesn't matter when you take your turn if that turn doesn't do anything to affect the board state. 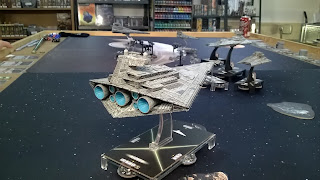 How Useful Is An Activation?

First off, an activation changes the board state in some way, hopefully to your advantage since it's your activation.  Consider the most basic of activations, a GR-75 Medium Transport.  At best it can do a limited number of things.  It can shoot anti-squadron shots around it, which at 1 Black dice is helpful, but not earth shattering.  It can pass a token to another, bigger ship if it has a Comms Net.  It can activate some squadrons if it makes a Squadron command.  And it can move, affecting where other ships can move and potentially damaging itself and other flotillas by ramming.  Some of these affect the board state more or less than the others.  Lets take a look:

As you can see, even a small, "non-combat" ship like a Medium Transport flotilla can have a large affect on the shape of the battle field, particularly by combining their regular activation with a squadron activation.  How much more valuable then is an activation that can do real damage to an enemy, removing their ships and squadrons from the board?

The biggest marker of a quality activation is that it changes the board state in a way that benefits you the most.

Pretty self explanatory, I know.  But consider when building a list - what ship, when activated, gets the most points I've brought affecting the board?  How big of a change to the board state will my largest activation be, and thus how important is it that I control when that activation will take place?

This is the very concept behind the 2016 World Cup Champion Clontroper5's eponymous Clonisher.  By putting maximum points into his Gladiator, and building a strong delay in activations with the rest of his fleet, he could ensure that not only would the ship create a major board state change whenever it activated, but that he would be able to control the exact timing of WHEN it activated.  Similarly if you look at JJ Juggernaut's 2016 World Champion list, you can see that his Admonition was built to activate nearly 1/4 of his total points, but that his Assault Frigate would activate even more with each Squadron command added into the mix (and take advantage of the boosts from Bomber Command Center / Toryn Farr), giving him two "quality" activations with his list.

This is also one of the big weaknesses in a swarm list - each activation by itself isn't particularly impressive, and by the time you get to your last ships, the state of the board can be quite different from where the round started.

So when you are making your list, stop to think of how your activations will work.  What is your "biggest gun" - what are you trying to delay or take advantage of First Player with?  What is your second biggest, and how close is it to the first?  What do your other activations look like - how do they contribute to the board state?  How many points are invested in those activations?

If you look at most of my old lists, I tend to build with one BIG activation in mind, usually approaching 1/2 of my total points in one big activation with one big ship.  An ISD2 or a MC80, possibly pushing squadrons, or navigating for excellent positional advantage.  From there, about 3 smaller activations either push squadrons or act as supporting guns.  That seems to be the standard for me.
Incoming Transmission From: Biggs at 07:31
Email ThisBlogThis!Share to TwitterShare to FacebookShare to Pinterest
Labels: List Building, Star Wars Armada, Strategy, Tactics