I don't know about you, but I've been long frustrated by the lack of Flight Controller options for the Rebels. There's the AFII...and that's about it. The only other ship remotely capable of it is the Liberty with title onboard. I've tried it, but it is not the optimal use of the Liberty, which would much rather be using Navigate​ commands. In my never ending quest to use anything but the AFII, I've started looking toward the coming Hammerhead Corvette. Yes, you read that right. Don't you make that face at me.

It's always hard speculating on ships that haven't been fully spoiled. However, with the Hammerhead Torpedo Corvette we have quite a few known quantities. First, we know it has, at a minimum, a Weapons Team slot, an Offensive Retrofit slot, an Ordnance slot, and the usual Officer and Title slots. I'll ignore the Title slot for now because the only known title isn't of us for commanding squadrons. The first choice is, obviously, Flight Controllers in the Weapons Team slot. With a likely squadron value of 1, however, we need ways to command more squadrons. That makes the next choice easy: Expanded Hangars in the Offensive Retrofit slot. Squadron 2 still isn't the best use of points. You really want to be commanding at least 3 squadrons to make the Flight Controllers worthwhile. What you need for the final piece of the puzzle is tokens.

There are a few ways you could go. First up is the new Leia commander card. This is a simple solution that ensures that the Hammerhead will always be able to command 3 squadrons so long as the Aldeeranian princess has something to say about it. If her steep 38 point cost is too much for you, or you want a different commander, don't fret. There are a couple other options. A Comms Net flotilla will work just fine. It doesn't​ really save you points compared to Leia, but it does net you an extra activation. Finally, my preferred route is to take a Veteran Captain. The downside here is you only gain one extra use and then you're stuck at squadron 2. Still, two turns of adding a blue to 3 squadrons is significant. That's typically how quickly the squadron fight is decided.

Based on what we know about the Hammerhead Torpedo Corvette, I can't see it costing more than 37 points. Assuming that holds true and you go my preferred route (FC, EH, and Vet Cap), this will all likely cost you around 51 points or so. That's a pretty good price. An AFIIB with just Flight Controllers is 78 points and is only commanding one more squadron. A Liberty attempting to do 4 squadrons would cost well into the 100s. That means a carrier Hammerhead could potentially be very efficient. I would add External Racks to mine, making them a nice dual threat willing to work in at close range. 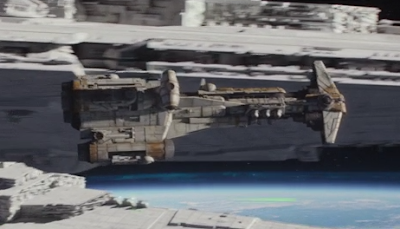 I can hear the arguments now: "Imperials could already do this with the Raider and they haven't." True, but Imperials already have two other effective platforms for Flight Controllers in the VSD and the ISD. Frankly, I'll never understand the hate for the VSD. It is the best Flight Controller platform in the game at the moment. Yes, that means it's often relegated to a carrier role, but at it's damned good at it. Baring a surprising point value, the Quasar will soon usurp that title with ease. The point is, Imperials don't need to even consider the Raider as a Flight Controller platform because they already have plenty of options. They aren't desperate like I am.

A lot is going to depend on the Nav chart. Like all carriers, the Hammerhead carrier would likely be too busy spamming the squadron command to Navigate. As a light ship with minimal shields and only 5 hull, the Hammerhead is perhaps more susceptible to this problem. I'll eventually go into the full list at a later date, but for now it is suffice to say I intend to pair it with my Lifeboat 2.0 concept Biggs talked about. I have to give full props to Shmitty for being the first to point it out, but Entrapment Formation's ability to adjust carrier speed cannot be undervalued
Incoming Transmission From: Truthiness at 12:46
Email ThisBlogThis!Share to TwitterShare to FacebookShare to Pinterest
Labels: Hammerhead Corvette, Offensive Retrofit Upgrades, Squadrons, Wave 6, Weapon Team Upgrades