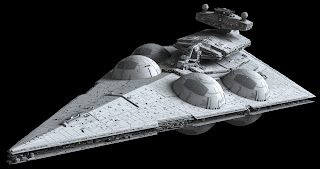 No ship was perhaps quite as exciting and wound up being quite as poor in implementation as the Interdictor.  You might rightly ask what is the Interdictor even good for these days?  Well, strap in because we are about to brainstorm ways to use the Interdictor to counter the current Meta!

The Interdictor already has a lot of things going for it against a Ramming build.  9 hull is a lot of hits to chew through, and 5 engineering lets even a token repair hull damage.  Only drawback, it is slow, and thus prone to getting boxed in.  Thought experiment time:  How many times in a single turn can it potentially disrupt Engine Techs?

By my count, four.  That's right, four potential damage prevented a turn against a ram fleet.  How do you kit it out for that?

Want to go hog wild?  Wulff Yularen and Engineering Team for another 12 points (115 total) and you have 3 hull repaired per turn with your Engineering commands (5 dial / 3 token / 1 Engineering Team).  Looks like the perfect place to put your Commander (Screed perhaps, for guaranteed MS-1 shots?  Or Motti for even more health?)  Season to taste.  No one is going to fly CR90 Ram Swarms against you ever again.

Your opponent LOVE their Demolisher / Admonition?  Remind them that Black dice can be fickle too.

Protect your friends and yourself with this Interdictor package.  Targeting Scrambler turns one close range shot into (hopefully) something less scary - you should save 2-3 damage on average.  Damage Control Officer ensures that if you are the target, you can just straight up ignore annoying common upgrades like Assault Proton Torpedoes.

Want to punish them after they blow their load?  Consider adding G-8 Experimental Projectors (8 points) to help keep them somewhere nearby for your Interdictor (and other ships) to play with.  Maybe add an Ion Cannon upgrade as well for additional damage - Overload Pulse (8 points) will give Demolisher some pause, and at least make Admonition blow a token to avoid it.  NK-7's might be a bit pricey (10 points) but stripping the Brace from Demolisher is a nice trick.  SW7s (5 points) might be the best bet for fighting Admonition though, since your accuracy results aren't likely to matter much.

Isn't this a job better left to Raiders?  Well, Raiders aren't exactly what you would call... robust.  It's not going to die to 6 Y-Wings on a bombing run in a single turn, for example.  Raiders are arguably better at the job, sure, but if you want an Interdictor anyway for something else, you can make it into a respectable anti-Squadron platform.

Leading Shots let you all but guarantee 1 damage per anti-squadron shot at close range, and Quad Lasers let you work against enemies that are going after you.  Got room for an officer?  Agent Kallus (3 points) loves to work at medium range against named pilots.  Still plenty of room for a Targeting Scrambler, or G-8 Experimental Projector.

Screw it, let's just make this thing into something it shouldn't be.

Strategy for this is to use it as a battering ram.  Rush forward with Engine Techs, dual arcing enemy ships for 3.75 average damage per attack, and then double ramming them afterwords.  9.5 damage total.  You've got 9 hull, you can handle a little ramming.  Skilled First Officer lets you quickly switch to engineering to repair the damage you sustained afterwords.  You certainly can block the front arc of more or less anything without worrying about being killed, and as a Medium base ship, you can actually BLOCK the front arc out to speed 3.  Worst case scenario, you're still (relatively) cheap at 104 points.  Certainly cheaper than the "christmas tree" ISD or Mon Cal that you are sitting squarely in front of.

If you want, you can throw on Targeting Scrambler.  For 5 points, isn't not the worst investment.  You know you're getting shot at close range after all.  Another option is to forgo Skilled First Officer and grab Minister Tua (2 points) and Electronic Countermeasures (7 points) to guarantee that Brace you will probably never see used.

How about it?  How would you kit out your Interdictor?  Post in the comments below.
Incoming Transmission From: Biggs at 12:27
Email ThisBlogThis!Share to TwitterShare to FacebookShare to Pinterest
Labels: Imperials, Interdictor Combat, Interdictor Suppression, List Building, Star Wars Armada, Strategy