In honor of Comamnder Sato, it seems only right to look at the Rebel equivalent to our recent Imperial question - how do we kit out what looks like an overpriced support ship?  Today we'll be discussing the Pelta, the newest Wave 5 ship the Rebellion gets to bring to the field.  We'll be most concerned with how to kit it out so that it can support your fleet in the most efficient way - it seems almost obvious that this is not a ship that wants to turn into a points hog as a 5 hull small base ship. 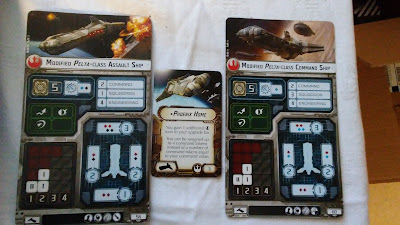 How many Black dice can a Pelta throw in a single attack?  Seven.  Yes, you read that right.

Certainly, it takes some effort and point investment to get there.  Sato, a squadron in range 1 of the enemy ship, the Pelta in close range, and Expanded Launchers (Wave 6 will make this slightly cheaper), and at best you are getting a single die rerolled.  But still, that is a considerable amount of damage output for a fairly inexpensive ship that doesn't need a double arc.  Do away with the Sato shenanigans, and you are still looking at a 6.5 damage average out the front arc (2 Red / 5 Black with Concentrate Fire).  Wait for Wave 6 and the whole thing comes out to 59 points (with External Racks).

Do you really need any fleet upgrades for that little trick?

This gives you an excellent ship to have anchor a flank for something else with forward guns, like Nebulon Bs, or a MC80 Liberty.  It also represents the best anti-squadron capabilities the Rebels have on a small base ship.

The problem that the Rebel fighters run into is that they are SLOW.  Speed 3 will not win a straight up alpha strike against a Speed 4 / Speed 5 Imperial fighter corps, because the Imperial fighters will not be in range for the rebels to strike.  Enter the Pelta:

I was able to use this loadout to good effect in my Regional tournament, and in doing so discovered a key feature: you only need one turn of AFFM to get the maximum use out of the upgrade.  That means you don't even need to save a token, you can just burn the card when the time is right.  After all, your fighters only need to close with theirs one time, then repositioning tends to be done by small movements rather than big sweeping speeds.

If for whatever reason you find yourself in a situation where you will need to use it more than once, you can always bank a first turn token, spend it on the Alpha Strike, and hold the card for the next big reorganization, but that should be few and far between.  The Boosted Comms are there to let your fighters jump up away from you if they need to do so to reach the enemy, and still let the Pelta contribute.

With how good X-Wings and Biggs are these days, this is the perfect ship to give them that little speed nudge from good to great.

Shmitty has been talking to me about putting together a Pelta Assault with Projection Experts and Shields to Maximum.  I'm thinking it would be best as a Second Player or high activation based fleet, to repair damage sustained at long range while forcing the enemy to close with your ships.  I'll leave it for him to figure out the best way to get the tokens to make this work properly - Antilles looks too pricey to add to the ship, and wasting a transport to feed tokens feels like an even bigger point waste.  Maybe a turn 1 bank, Veteran Captain, waste the card?  Asoka is another option if you expect a Turn 3 engagement, letting you bank 2 tokens on the first two turns and ensure they are the right tokens for Turn 3 and Turn 4.

Something to think about, certainly.

Probably the best place for this ship to be in a trailer role - something Shmitty has talked in length about - following behind your main force to pick off anything that tries to get past and make a run for it.  It can double as an extra tough lifeboat as well, if you feel like keeping your Commander out of the fight (you wimp!)

Further discussion with Shmitty says this works best with Liberties and Nebulons, patching holes in their shields where they have limited redirects.

I have a really difficult time figuring out a good way to make this upgrade work.  For one thing, it aggressively disagrees with the Pelta in general, and the ships I feel the Pelta works well with in particular.  Unless you are bringing the Pelta along as some sort of slow support to a TRC90 / MC30 party, it seems like a hell of a waste.  Maybe I am wrong here, and you have some good way to make it work within the context of your fleet - if so post it!

Truthiness has this idea:

This build primarily looks to take advantage of Entrapment Formation, though it could be used for any Fleet Command upgrade. You take an Assault Pelta and add Engine Techs, a Veteran Captain, and whatever flavor of Fleet Command you like. On the first turn, you bank whatever token you need. Between that first token, the Veteran Captain, and discard, you get a minimum of three uses out of Fleet Command, more than often plenty of useage. I like this in carrier builds using Entrapment Formation to allow flexibility for carriers spamming squadron commands. You can just spam Navigate commands for turns 2+. If you think you can go without the command, bank the token and get another use out of Entrapment Formation. If you need the Engine Techs, keep the command for the Pelta, allowing for effective speed 3 with 5 clicks on the maneuver tool. This flexibility makes for an ideal flagship. It can stick to the outskirts of the fighting, but unlike the ubiquitous “lifeboat” flotilla, the Pelta is durable enough to take a hit without melting in this age of flotilla hunters. Wave 6 will make for an easy addition of External Racks, giving a nice one time punch of 2 reds and 4 blacks. All this for 75 points come wave 6.