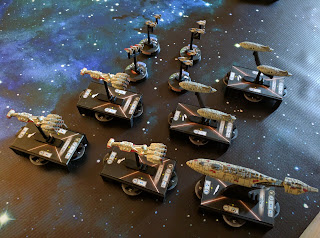 Unlike Biggs, I opted to stay close to what I've been running for the last month. That's right everyone, Team Ramrod is reborn and ready to get up close and personal in the worst way possible. I'll dive into the key changes since my outing at the Stele Open, but first let's start with the list itself.

First and foremost is the replacement of the Liberty-class with Admonition. Throughout Stele, it felt like a giant weight around my neck. It had a good moment in the last game, but otherwise kept getting itself into trouble. That large base is hard to protect, even with Madine helping it out. It only survived one game, so it was hard to justify such a large points sink into something going down that often. The tooled up Admonition offers a similar amount of firepower, albeit at closer range. Normally I'm an advocate of using Mon Mothma with MC30s, but after a couple games, it became clear that where as Admo normally has to do one drive by and be done, Madine helped adapt the nav chart to make additional passes.

Even tooled out with H9s, APTs, and Ordnance Experts, Admonition still came in well under the points of the Liberty-class. That left me room to pack in a few extra. With H9s in tow, I didn't feel the need for an Intel Officer. Instead I've opted for Derlin to make the frustratingly hard to kill Admonition even harder to kill. I was also able to upgrade the list's blue dice, of which there are plenty, by grabbing Toryn Farr. I placed her on a flotilla and grabbed Bright Hope as well. It should make the A-Wings all the more frustrating in the squadron fight as well as help out the CR90Bs.

Finally, I had to find a new home for Madine. I wasn't comfortable putting him on Admonition as it is often in dangerous positions. No, I'm not putting him on a flotilla. Stop ruining the game with your anti-thematic power gaming. More importantly, however, I use my flotillas as direct support to the squadron fight. They are intended to get stuck in and use their black anti-squad batteries to support the A-Wings. The last thing I want to do is put a lifeboat in that position. The rammers are obviously a poor choice. That left me with the TRC90. Luckily it seems to be pretty low on target priority in the games I've played. It did not get killed during any of my games at Stele. So I added the Jaina's Light title to give it a little more flexibility in positioning and put Madine on that. It's able to contribute at distance, keeping Madine away from the bulk of the fighting while still throwing damage into the fight.

This list is explicitly designed to go after the flotilla spam that's pervasive in the meta. With Admo and the Rambos, I can reliably remove at least 2 flotillas very quickly, giving myself a large activation advantage. The A-Wings have consistently punched above their weight class, so I'm not really scared of squadron swarms. I also don't give up points easily. I have the speed, maneuverability, and activation count to disengage and choose my fights with near impunity. As Brendon as Stele put it, it's very good at bleeding points out of an opponent. With Liberty gone, that gets even easier. Oddly enough, I think I'm weakest against a list like the one Biggs is bringing. I can bring down a single large ship by consistently whittling it down over the course of the game and finishing it with Admo, but I have no idea if I can manage two large ships with repairing spam. I guess we'll see.
Incoming Transmission From: Truthiness at 15:38
Email ThisBlogThis!Share to TwitterShare to FacebookShare to Pinterest